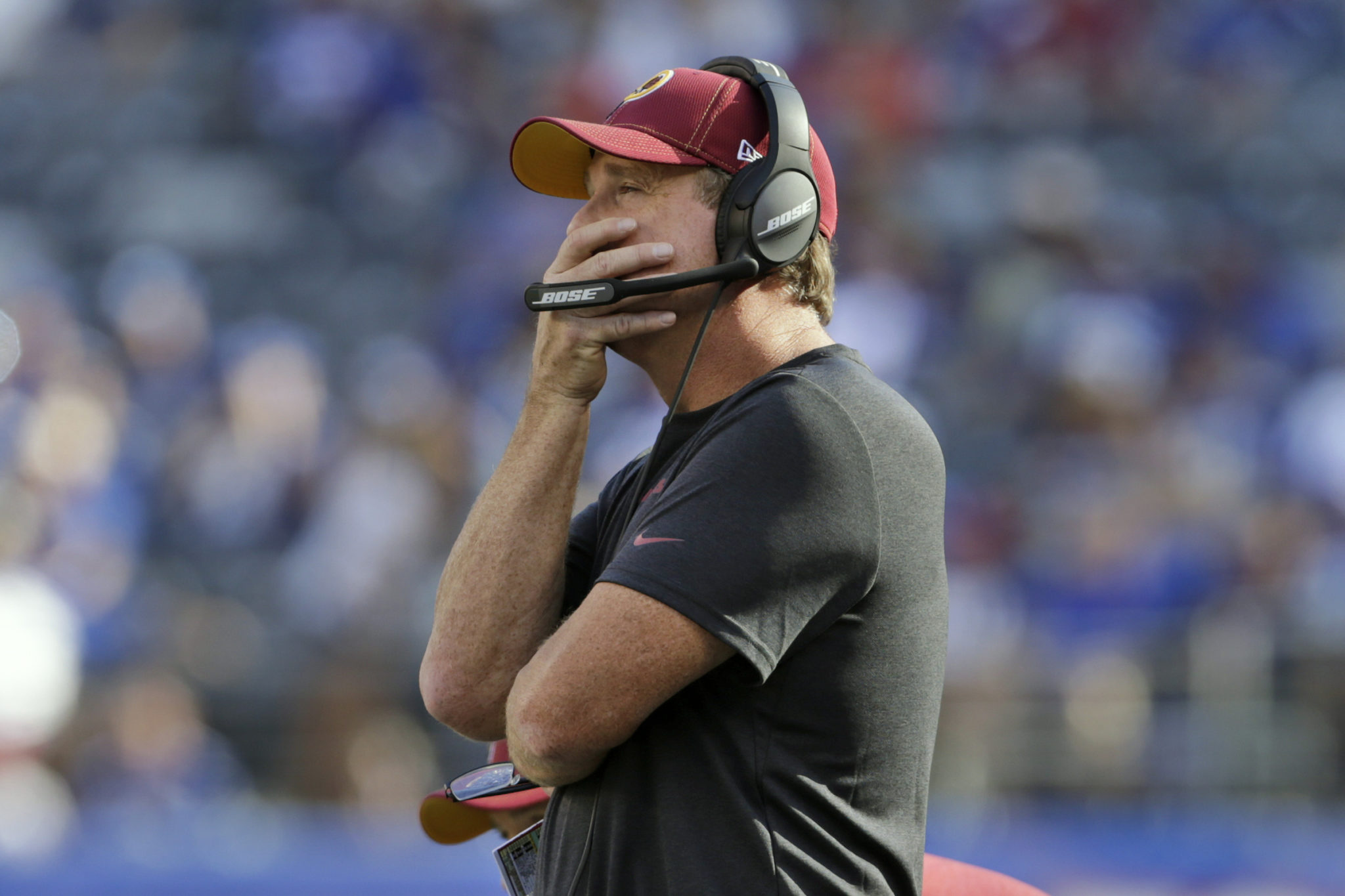 Owner Dan Snyder and President Bruce Allen summoned coach Jay Gruden to the Washington Redskins’ facility before dawn Monday to tell him he was being fired.

“It was a brief conversation,” Allen said.

Now comes a longer conversation about the status of the floundering franchise that has won just two playoff games in Snyder’s two decades of ownership and zero during Allen’s tenure. Gruden is out after an 0-5 start to his sixth season and is the latest in a long line of Redskins coaches to take the fall for significant organizational shortcomings.

“To make a decision like this is difficult, but it was necessary,” Allen said during a 13-minute news conference. “Our 0-5 start is not just disappointing. We had much different expectations for the beginning of the season. We owe it to our fans, … the organization, the players, the coaches and their families to do everything we can to win.”

The Redskins haven’t won much lately, going 35-49-1 overall under Gruden with one playoff appearance in the 2015 season. A popular coach among players and a smart offensive mind, Gruden struggled in preparing his teams: Washington went 1-5 in season openers and lost a win-and-get-in game in Week 17 in 2016 against the New York Giants, who had nothing to play for.

Despite never before being a head coach in the NFL, and despite never winning more than nine games in a season, Gruden managed to stick around longer than anyone else who’s held that job during Snyder’s unsuccessful stint as owner.

Asked why Snyder wasn’t addressing fans, Allen said, “Because I am.” Snyder was not made available to reporters Monday.


None of the six coaches hired since Snyder bought the team has a winning record, including Hall of Famer Joe Gibbs and two-time Super Bowl champion Mike Shanahan. Offensive line coach Bill Callahan becomes the seventh after he was selected to replace Gruden on an interim basis.

Callahan has coached the Raiders in the NFL and Nebraska in college football.

“We’re fortunate to have a seasoned veteran like Bill Callahan on our staff,” Allen said. “He has a track record as a head coach. He is already implementing a plan for this team, and schedules are going to change and things of that nature.”

This season alone has seen star left tackle Trent Williams hold out; a shuffle at quarterback after Dwayne Haskins was taken No. 15 overall in the draft; a series of injuries up and down the roster; and, perhaps most upsetting to team leadership, increasingly large contingents of visiting fans attending games at Washington’s home stadium.

“All we can do is try to improve our product,” Allen said. “These games, we weren’t close in. We’ve lost five games, and we didn’t lose them in the last second. We lost these games decisively. And we have to change that.”

Allen is right: The Redskins rarely have even been competitive, ranking 30th out of 32 NFL clubs in scoring, averaging 14.6 points, and defense, allowing 30.2 points per game. The only club that ranks worse than Washington in both categories — the 0-4 Miami Dolphins — will host the Redskins next Sunday.

Cornerback Quinton Dunbar wrote on Instagram that he owes Gruden “for life” for helping him by switching him from wide receiver after college and added: “Sorry we couldn’t get the job done for you.”

Gruden was fired the morning after a 33-7 loss to the defending champion New England Patriots. Afterward, Gruden said he didn’t “have a concern” about his job status with a season remaining on his contract.

“Nobody’s told me anything,” Gruden said. “(If) my key works on Monday, keep working.”

Instead, Gruden is gone, and Allen was asked repeatedly about his own job performance. The Redskins are 59-89-1 with Allen working in some capacity since 2010.

Allen said he doesn’t believe “anybody is hiding from their record” and took issue with questions about the organizational culture that has been the subject of widespread criticism.