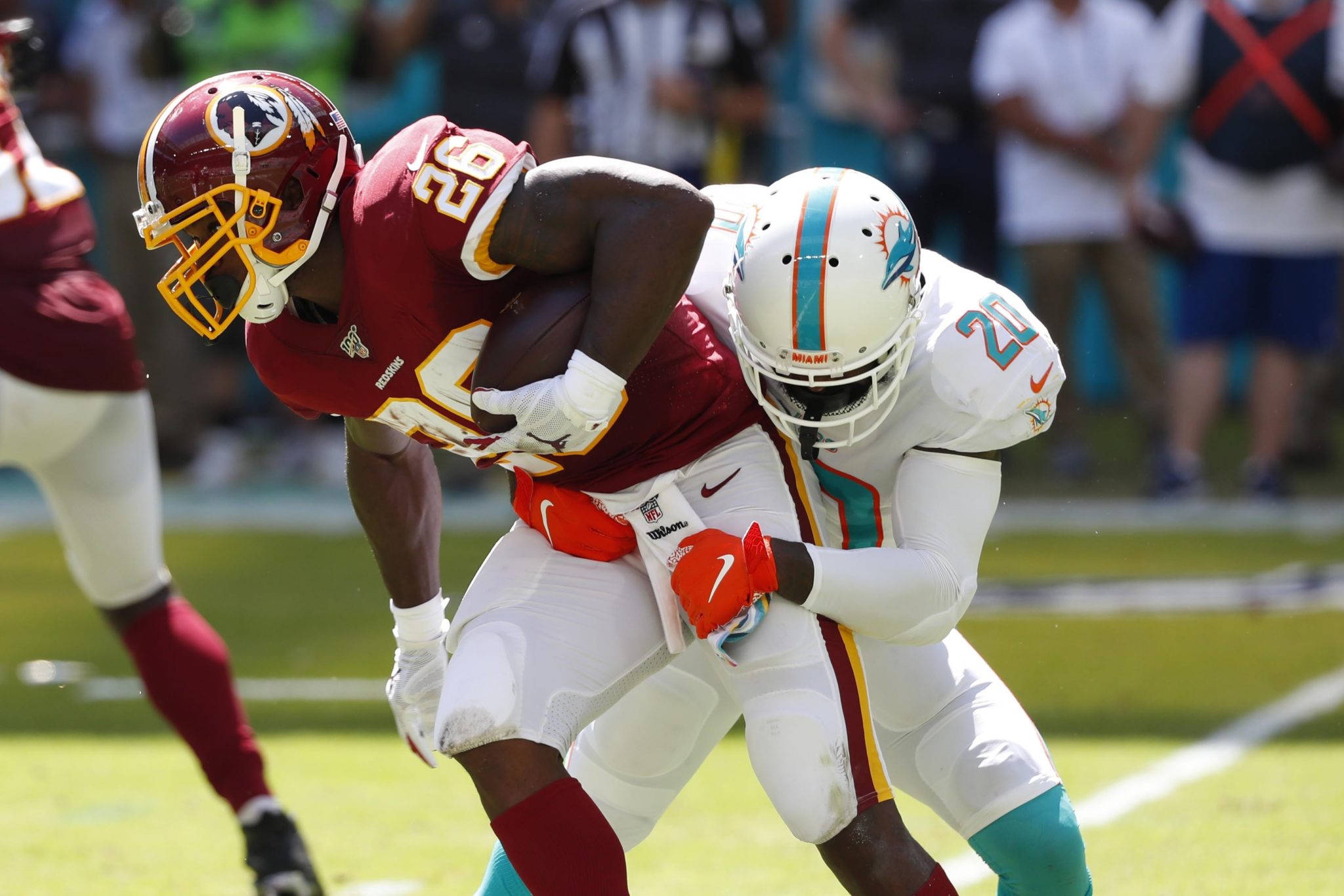 It’s no surprise a matchup between winless teams was decided by a dropped pass.

Running back Kenyan Drake couldn’t handle Ryan Fitzpatrick’s quick throw in the flat on a 2-point conversion try with 6 seconds left Sunday, allowing the Washington Redskins to escape with their first victory of the year by beating the Miami Dolphins 17-16.

Drake had four defenders between him and the end zone and probably wouldn’t have scored even if he had secured the ball. But the drop put the brakes on a frantic comeback by the Dolphins, who trailed 17-3 when Fitzpatrick replaced Josh Rosen to start the fourth quarter.

“Games like this, two winless teams, everybody pulls out the stops,” Callahan said. “It was wild all the way to the last minute.”

Washington (1-5) looked like a different team after firing coach Jay Gruden, although the caliber of the opposition had something to do with that. The Dolphins (0-5) remained winless under rookie coach Brian Flores but helped their chances of securing the No. 1 draft pick in April.

When asked about the two-point conversion, Flores said he was going for the win.

“We felt good about the play — something that we worked on all week,” he said.


Drake, however, said another running back practiced that play, and not him.

Fitzpatrick led two touchdown drives, including a climactic 75-yard march that began with 2:02 left. After he hit DeVante Parker for an 11-yard score to cut the deficit to one point, Flores decided to go for 2.

Drake split wide left, went in motion and had traffic around him when the pass was thrown his way.

“He wasn’t going to walk in the end zone,” Fitzpatrick said. “He was going to have to do something significant and special. We wanted to give him the chance to do that.”

Drake said, “I have to hold my end of the bargain up. Everyone has their job to do. My job is to catch the ball and get in the end zone.”

Although Miami’s defense mustered its best effort of the season, McLaurin slipped behind the secondary to catch scoring passes of 25 and 33 yards from Case Keenum, who returned after missing one game because of a foot injury.

McLaurin, a third-round draft pick who has been one of the Redskins’ few bright spots this year, totaled four receptions for 100 yards.

Callahan gave Peterson a significant workload as expected, and the four-time All-Pro running back carried 23 times to reach the 100-yard mark for the 56th time.

“It’s about having opportunities and sticking to it,” Peterson said. “There were a couple times they stuffed us, but we stuck to running the ball.”

After making a diving interception, Redskins linebacker Shaun Dion Hamilton rose and trotted 35 yards to the end zone, waving for his teammates to join him. More than a dozen did to strike a pose for photographers.

Miami’s offense generated few cheers from the half-empty stadium until the end, and remained on pace for the lowest-scoring 16-game season in NFL history.

The Dolphins used six offensive linemen at times and converted two fourth downs, one with special teams trickery. They attempted an onside kick, which was foiled by a penalty.

Nothing could reverse their fortunes. Miami never led and has been ahead for only 3 minutes, 49 seconds this season.

Washington intercepted Rosen twice and sacked him five times before Flores benched him.

“I was disappointed, but I understood the situation,” Rosen said. “It was obviously a smart decision.”

Redskins: RB Chris Thompson left the game in the third quarter with a foot injury. TE Jerome Cunningham departed in the fourth quarter with a knee injury.

REDSKINS: Callahan said Keenum will remain the starter when the Redskins play host to San Francisco on Oct. 20. Washington won the last time the teams met two years ago.

DOLPHINS: Flores said Rosen will remain the starter when the Dolphins play Oct. 20 at Buffalo. The Dolphins lost their season finale there last year, and coach Adam Gase was then fired.