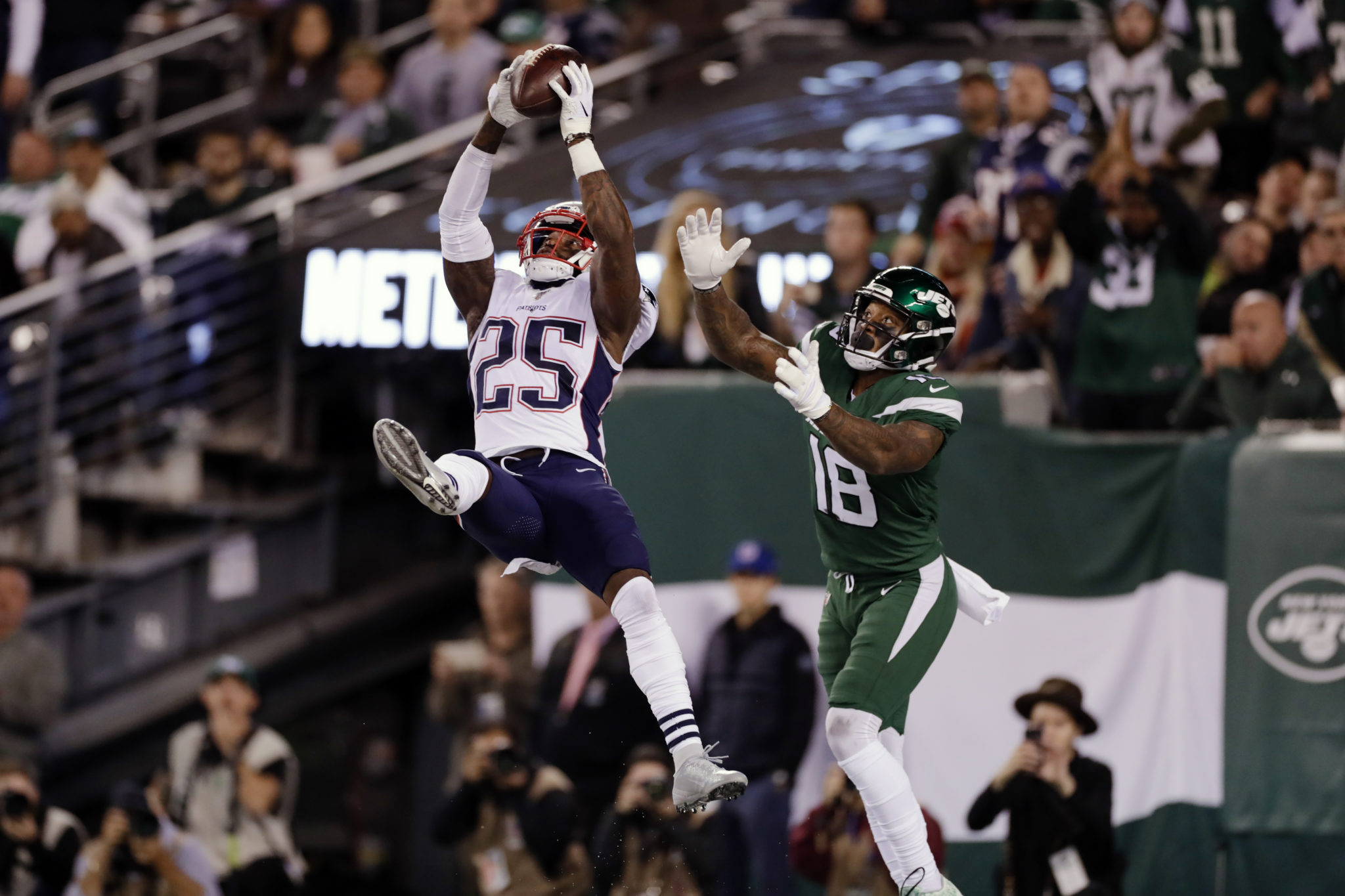 Tom Brady set the tone and the New England Patriots’ blitz-happy defense took over from there.

Brady threw a TD pass to Phillip Dorsett, Sony Michel ran for three scores and New England forced Sam Darnold into five turnovers while cruising to a 33-0 victory over the New York Jets on Monday night.

“We were able to make some plays early in the game,” Belichick said, “and play pretty solid for 60 minutes.”

The Patriots improved to 7-0 for the third time in franchise history, and first since 2015. They also swept the two-game season series against their AFC East rivals for the fourth straight year, outscoring the Jets (1-5) 63-14 in the two meetings this year.

And, the top-ranked Patriots defense was a big reason in this one.


Darnold was the AFC offensive player of the week after leading New York to a 24-22 win over Dallas last Sunday in his return from missing three games with mononucleosis.

He was miserable against New England, finishing 11 of 32 for 86 yards and a 3.6 quarterback rating. ESPN had Darnold wear a microphone during the game, and he was caught on the sideline saying, “I’m seeing ghosts” at one point.

“It was a rough night out there,” Darnold said. “And obviously, I’ve got to be better and learn from the mistakes, but we will get better.”

Belichick blitzed Darnold often, giving the second-year quarterback little time and forcing him into bad — and often ugly — throws. Devin McCourty, Duron Harmon, Stephon Gilmore and Terrence Brooks all had interceptions. Darnold also lost a fumble on a sack, and later knocked an errant snap out of the back of the end zone for a safety.

Brady was 31 of 45 for 249 yards with a TD and an interception before leaving with 2:55 left to chants of “Brady! Brady!” from the Patriots fans who stayed until the end at MetLife Stadium.

They watched New England take total control from the beginning.

Michel’s 3-yard touchdown run capped an efficient drive by Brady to open the game. The Patriots went 16 plays and 78 yards while eating up 8:47, and converted four third downs along the way. The last came on third-and-2 when Brady pitched it to Michel, who easily zipped into the end zone.

“Our guys were ready to go today,” Belichick said. “We got off to a good start. That was a great opening drive. It took up most of the first quarter.”

New England made it 10-0 a few minutes later after McCourty intercepted Darnold’s first pass of the game, coming on the Jets’ second play from scrimmage. New England turned the turnover into a 34-yard field goal by Mike Nugent.


After the Jets went three-and-out, Brady went back to work. On fourth-and-6 from the 35, Belichick opted to leave the offense on the field instead of having Nugent try for a 53-yard field goal.

And, it paid off.

Brady connected with Ben Watson for 7 yards to extend the drive. After a 2-yard run by Michel, Brady threw a perfectly placed ball to Dorsett, who caught the pass over Trumaine Johnson in the end zone for a 26-yard touchdown.

“We had good balance,” Brady said.

New England took advantage of another turnover by Darnold on the Jets’ next drive when John Simon popped the ball out of the quarterback’s hand for a strip-sack and Kyle Van Noy recovered. The Patriots linebacker ran 39 yards for what was initially called a touchdown, but officials then ruled he was down.

Four plays later, it appeared James White had a 4-yard touchdown run, but it was wiped out by an illegal block in the back penalty on Julian Edelman. Brady’s pass to Jakobi Meyers fell incomplete on third-and-goal from the 3, but Brian Poole was called for defensive holding. Michel ran it in from the 1 three plays later to make it 24-0 with 9:18 left in the first half.

Darnold’s third turnover came on the Jets’ next possession when his throw to the end zone was intercepted by Harmon. Gilmore picked off Darnold on New York’s opening drive of the second half.

It only went downhill from there on the Jets’ next possession when Ryan Kalil’s snap sailed over Darnold’s head and he knocked it out of the back of the end zone for a safety.

“Obviously, that was brutal,” Jets coach Adam Gase said. “We couldn’t do anything right. All three phases, we were bad. It was just a bad performance.”

Kalil injured his right elbow late in the second quarter and was replaced by Jonotthan Harrison. Kalil returned to open the second half with a sleeve over his elbow, but again left after his wayward snap.

It was New England’s second shutout this season after winning 43-0 at Miami in Week 2. … The Patriots dominated the opening quarter, outgaining the Jets 141 yards to 14 while holding the ball for 12:34 compared to just 2:26 for New York. … Brady’s 29 regular-season wins vs. the Jets are his second-most against any opponent, with only his 31 against Buffalo more.

Former Jets center Kevin Mawae received his key from the Pro Football Hall of Fame during a halftime ceremony. Mawae, who played for New York from 1998-2005, was inducted in August.

Jets: at Jacksonville next Sunday.