NFL’s foreign footprint has expanded significantly over past 15 years 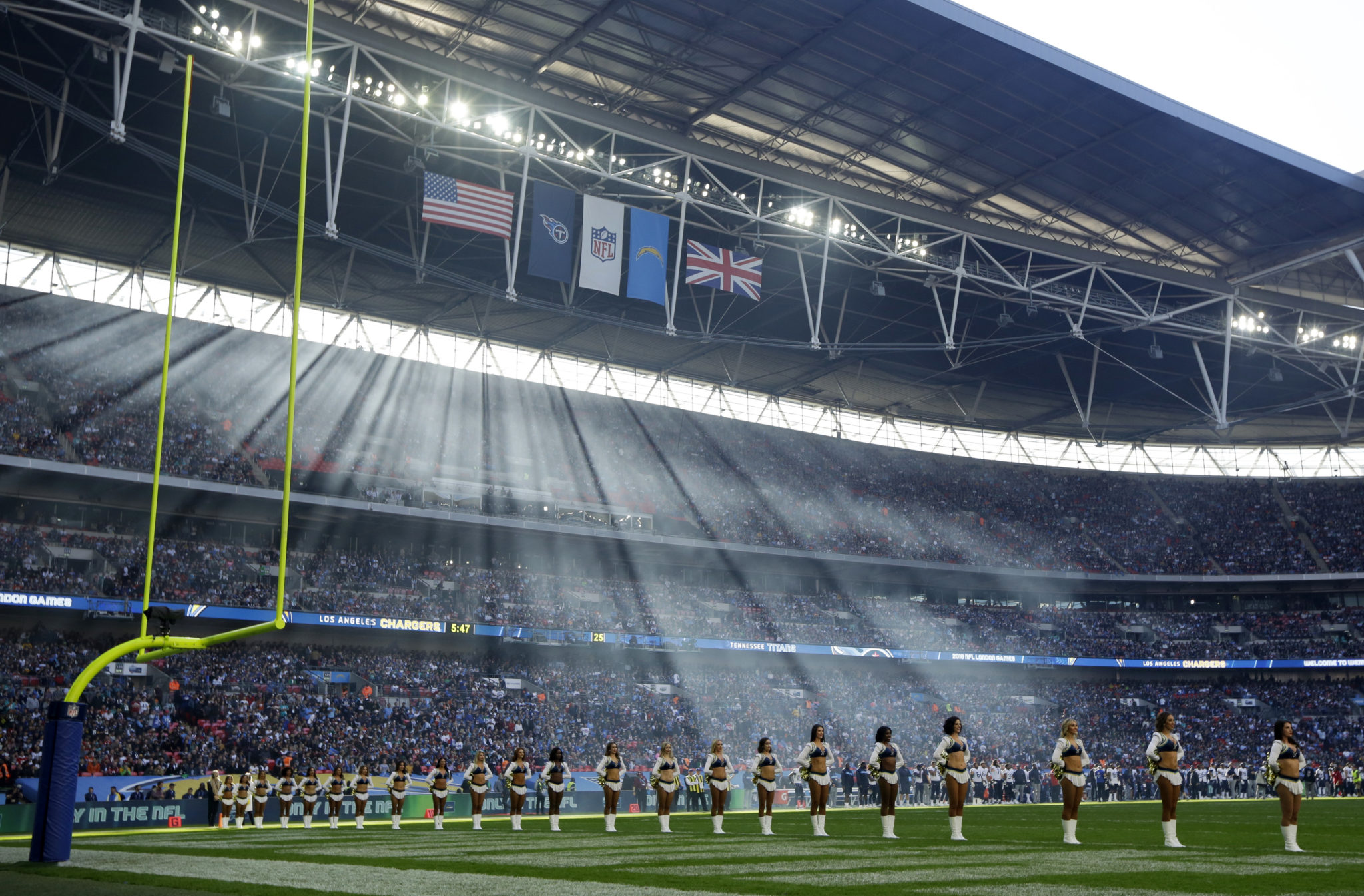 Khalil Mack’s first game against his ex-teammates comes not with a Bay Area backdrop but in the land of Big Ben and Buckingham Palace.

The Chicago Bears and Oakland Raiders are playing the first NFL game at Tottenham Hotspur Stadium on Sunday. The new $1.22 billion multi-purpose venue features a retractable grass field for the Premier League soccer club with an artificial surface underneath for NFL games.

Chris Halpin, the NFL’s chief strategy and growth officer, called the 62,000-seat stadium that will host two NFL games yearly for the next decade “a long-term symbol of the NFL’s commitment to London and the size of the NFL’s fan base and energy in the UK.”

As the league celebrates its 100th season, it continues to expand its foreign footprint with five international games in 2019. Four are in London, including two at Wembley Stadium, and the league returns to Mexico after last season’s Chiefs-Rams game was moved to Los Angeles because of poor field conditions at Azteca Stadium. On Nov. 18, the Chiefs will play LA’s other team, the Chargers.


The Bears-Raiders matchup is the 25th regular-season game the NFL has played in London since 2007 and the first played outside the U.S. in a stadium built for American football as well as for soccer.

There have been six games in Toronto and three in Mexico City.

This foreign adventure all began on Oct. 2, 2005, when Robert Griffith sprinted out of a giant inflatable helmet at Mexico’s famed Azteca Stadium screaming and wildly waving a Mexican flag as he charged through smoke and a corridor of cheerleaders.

It was a fabulous fiesta for the 103,467 fans who packed Mexico’s largest stadium for the first regular-season game outside the United States, which Arizona won 31-14 over San Francisco.

The NFL had staged a handful of exhibition games abroad, starting with the Bears’ 16-7 win over the Giants on Aug. 15, 1960, at Varsity Stadium in Toronto.

This year marks the 13th consecutive season that the league is playing multiple international games. The NFL counts a 15 million-strong fan base in the United Kingdom and the league also is wildly popular in Mexico, where a record 112,376 fans attended a Cowboys-Oilers preseason game in 1994.

Officials at Azteca Stadium converted the field back to natural grass after a failed attempt at a hybrid led to the move of the NFL game there last year back to LA.

In May 2018, the stadium switched to a field combining synthetic and natural grass, which has been used successfully in some of Europe’s biggest soccer venues. But it didn’t take at Azteca and was ragged after a heavy schedule of events in November leading up to the planned Chiefs-Rams game.

Halpin said a delegation of NFL officials visited Azteca last week and “found the field in exceptional shape” with a return to grass and a lighter event calendar.


A return to Canada and a foray into Germany, a growing market that showed strong support for the NFL’s old European developmental league, could be on the horizon.

And the international series could balloon if the league ever expands to a 17-game schedule, imaginably making room for neutral site games for every NFL team.

As for the possibility of the NFL having a team based in London one day, that’s up to team owners, Halpin said, adding the league’s aim is simply “to build a fan base to support a team in London should that decision ever be made.”

The league counts 15 million fans in the U.K., but the prospect of having a team across the Atlantic worries many.

“I think they’re a nice shot one at a time, but I don’t think you can permanently put a team there,” Broncos coach Vic Fangio said, citing logistical challenges including offseason workouts and in-season tryouts. “I think it would be a mistake. I think it would be logistically next to impossible.”

Joe Flacco, who played in London two years ago with the Ravens, said the overseas flight can adversely affect one’s play overseas and the jet lag can produce a lingering hangover if not followed by a bye week.

“It’s definitely a grind,” said Flacco, who can’t even fathom a London-based team having to make so many quick trips to the mainland for preseason, regular-season and playoff games.

“I’ve rattled it around in my head because you feel like they’re going that way in some sense, but just the physical and mental grind of it all, I couldn’t imagine how they’d end up doing it,” Flacco said. “I feel like they’d have to have a bunch of rookies or second-year guys that weren’t really attached to anything and didn’t really mind about getting on a 6½-hour plane ride and switching time zones.

“We want to be a competitive league and it would definitely put you at a disadvantage.”


The Bills and Jaguars have played the most international games with six each. The Bills played one of their home games in nearby Toronto every year from 2008-13. The Jaguars are owned by Shahid Khan, who also owns the Premier League club Fulham.

Jacksonville defensive tackle Abry Jones has made six trips to London in as many seasons and breaks it down this way:

“Pros? If you’ve never been over there, it’s cool. New place. If you’ve never been to London, beautiful city. That’s another pro. Depending on when you get there, some teams might take a week. We used to be like that. Now we’re at the end of the week. But if you get there the beginning of the week and you get a nice off day, you can go explore. For people who like shopping, all that stuff is over there and they have somewhat big man sizes, so that’s another pro.”

“Cons? One, I haven’t found nowhere else to eat except Nando’s. But Nando’s is a terrific place, so I’ve got no problem eating there. Two, the flight’s not ideal. Three, people look at you funny. If you got tattoos, they’re going to ask questions like ‘How you got a job? How you keep a job?’ I just thought that was crazy. You see how large we are? You know who we are. But, OK, cool, tattoos and jobs go hand in hand over there. Other cons? Let’s see. Taxes, but I’ve been lucky enough that I don’t really even look at it anymore.”

The biggest drawback, Jones said, was flying back exhausted and having to go through security and customs with gifts for everyone back home.

“By the time you get your bag, it’s already like 5 in the morning. And then we have to be back in the facility by 3 o’clock,” Jones said. “That’s another con: time, really. Even flying over there. You’ve got to sleep on the plane and then you’ve got to stay up to get adjusted. If you get there and land and go to sleep, it’s going to mess you up for the rest of the week. That’s a pro or a con if you do it right or wrong. There are a lot of cons to go with a few pros.”

Carolina plays Tampa Bay at Tottenham next week in the Panthers’ first international game, leaving the Green Bay Packers as the only team never to have played on foreign fields.