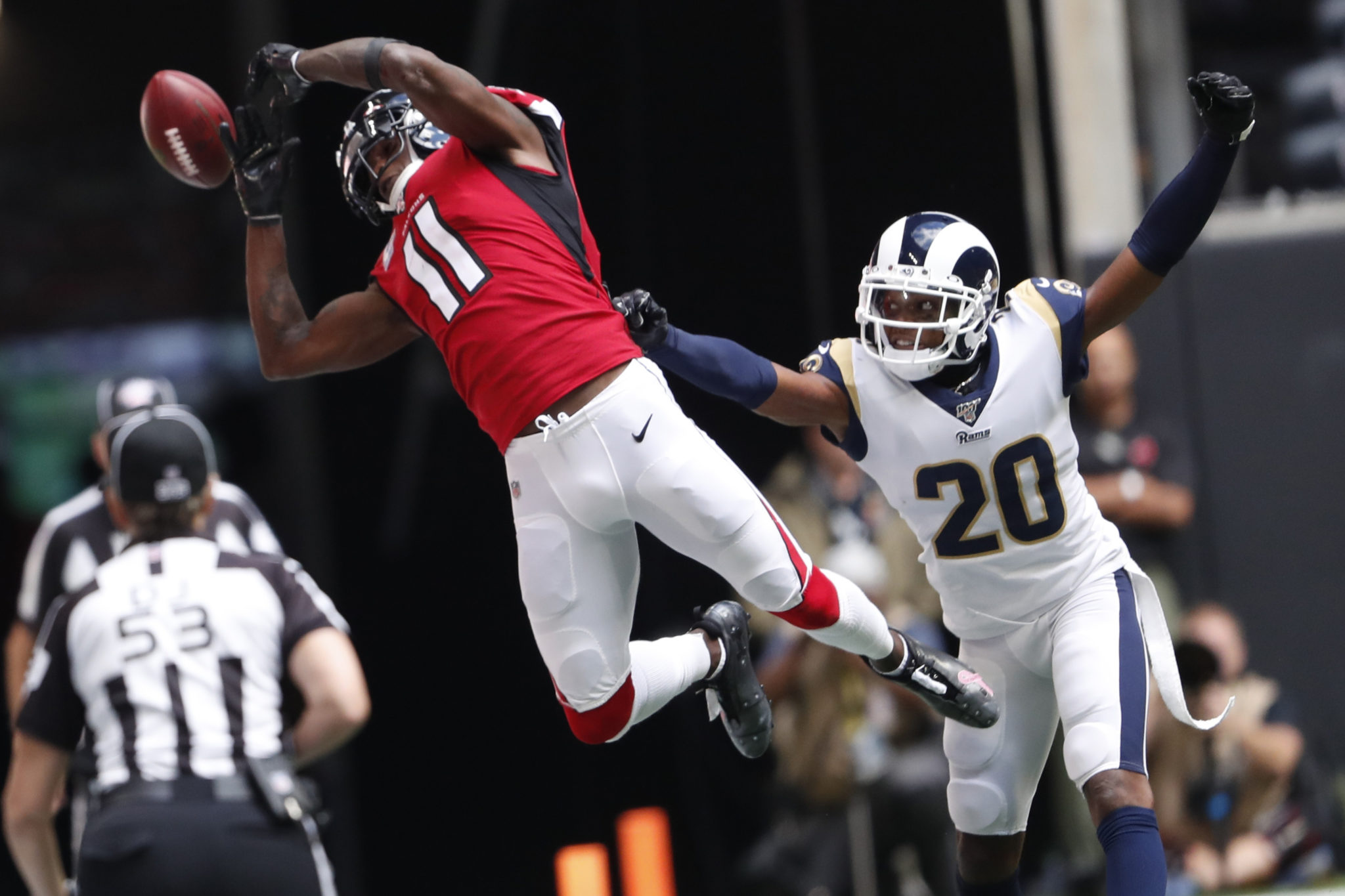 Jared Goff threw for two touchdowns and ran for another, and the Los Angeles Rams returned to the site of last season’s Super Bowl loss to beat the reeling Atlanta Falcons 37-10 on Sunday.

The Rams (4-3) snapped a three-game losing streak in the debut of cornerback Jalen Ramsey.

“We’re back on track,” said linebacker Dante Fowler, who had three sacks and a forced fumble.

Coach Sean McVay was impressed by Ramsey’s ability to prepare for the game following Tuesday’s trade from Jacksonville.

“I can’t say enough about his ability to digest the game plan,” McVay said.

“I think it’s just a real credit to our defensive coaches and then Jalen’s ability … to come in on short notice with such short practice time and do what he did. It was a good boost to our team, to be sure.”


The Falcons (1-6) suffered their fifth straight loss and had quarterback Matt Ryan leave the game with an ankle injury. Ryan’s right leg bent awkwardly as he was sacked by Aaron Donald and fumbled early in the fourth quarter.

Ryan limped off the field and was escorted to the medical tent on the sideline. He walked to the locker room, still favoring the ankle, with 7:36 remaining in the game.

Coach Dan Quinn said he did not know the severity of Ryan’s injury. Ryan wore a walking boot in the locker room and was not made available for his usual postgame news conference.

Donald was credited with a sack, forced fumble and recovery on the play. It was the Rams’ fifth sack of Ryan, matching the five sacks by Atlanta’s defense this season — none in the last four games.

The final insult for Atlanta came with only 11 seconds left, when Kenjon Barner fumbled a punt return when hit by Troy Reeder and Darious Williams recovered in the end zone for a touchdown.

Ryan’s injury was the latest and perhaps most damaging dose of bad news for the woeful Falcons. Quinn’s job security appears shaky at best as he quickly runs out of time to avoid a second straight losing season.

Quinn, who took on the added role of defensive coordinator following a 7-9 finish in 2018, revealed after the game that he began assigning some defensive play-calling duties to assistants in last week’s loss at Arizona and continued to share that role on Sunday.

“I’m always looking to do anything that’s best for the team,” Quinn said. “My ego is never bigger than the team.”

Quinn said he doesn’t believe he has lost the team or the season.


Atlanta’s frustrations showed in a third-quarter fight between running back Devonta Freeman and Donald that led to Freeman’s ejection. The two locked up after Ryan’s pass off Mohamed Sanu’s hands was intercepted by Cory Littleton deep in Atlanta territory with the Rams leading 20-3.

Freeman had his hands on Donald’s facemask before throwing a punch at the much bigger Donald, which appeared to make little if any contact. Umpire Terry Killens finally pulled Freeman away from Donald, taking Freeman to the ground in an apparent unintentional body slam before quickly helping Freeman to his feet.

Each player drew unnecessary roughness penalties, and Freeman was tossed for throwing the punch.

The turnover left the Rams at the Atlanta 16 for a short drive capped by Goff’s 1-yard scoring run.

With running back Ito Smith already out with an injury, Freeman’s ejection left Brian Hill and return specialist Kenjon Barner as the options at running back.

Goff completed 22 of 37 passes for 268 yards and two touchdowns. Blake Bortles took over on the Rams’ final possession.

Atlanta’s offense struggled even before Freeman’s exit. The Falcons were limited to 224 yards.

As expected, Ramsey shadowed Falcons standout Julio Jones much of the game. Jones had six catches for 93 yards in his first matchup with Ramsey.

Ramsey moved into a revamped secondary. The Rams placed cornerback Aqib Talib and safety John Johnson on injured reserve this week and traded cornerback Marcus Peters to Baltimore. That left safety Eric Weddle as the only holdover starter.

The new mix held up well. Ryan completed 16 of 27 passes for only 159 yards with an interception.

Goff threw a perfectly placed 13-yard touchdown pass to Todd Gurley early in the second quarter. He added an 8-yard scoring pass to Gerald Everett in the third quarter.

Everett, an Atlanta native, celebrated by doing the “Dirty Bird” dance made famous in the Falcons’ 1998 Super Bowl season.

Smith was carted off the field late in the first quarter with head and neck injuries following a helmet-to-helmet hit from Rams linebacker Cory Littleton. There was no flag. Smith did not return.

The Rams will remain in Atlanta to practice at Georgia Tech for a few days before flying to London for next Sunday’s game against Cincinnati.

The Falcons will play the Seahawks in another home game next Sunday. Seattle leads the series 10-8, including two playoff games won by Atlanta.