Rodgers, Jones star for Packers in 31-24 victory over Chiefs 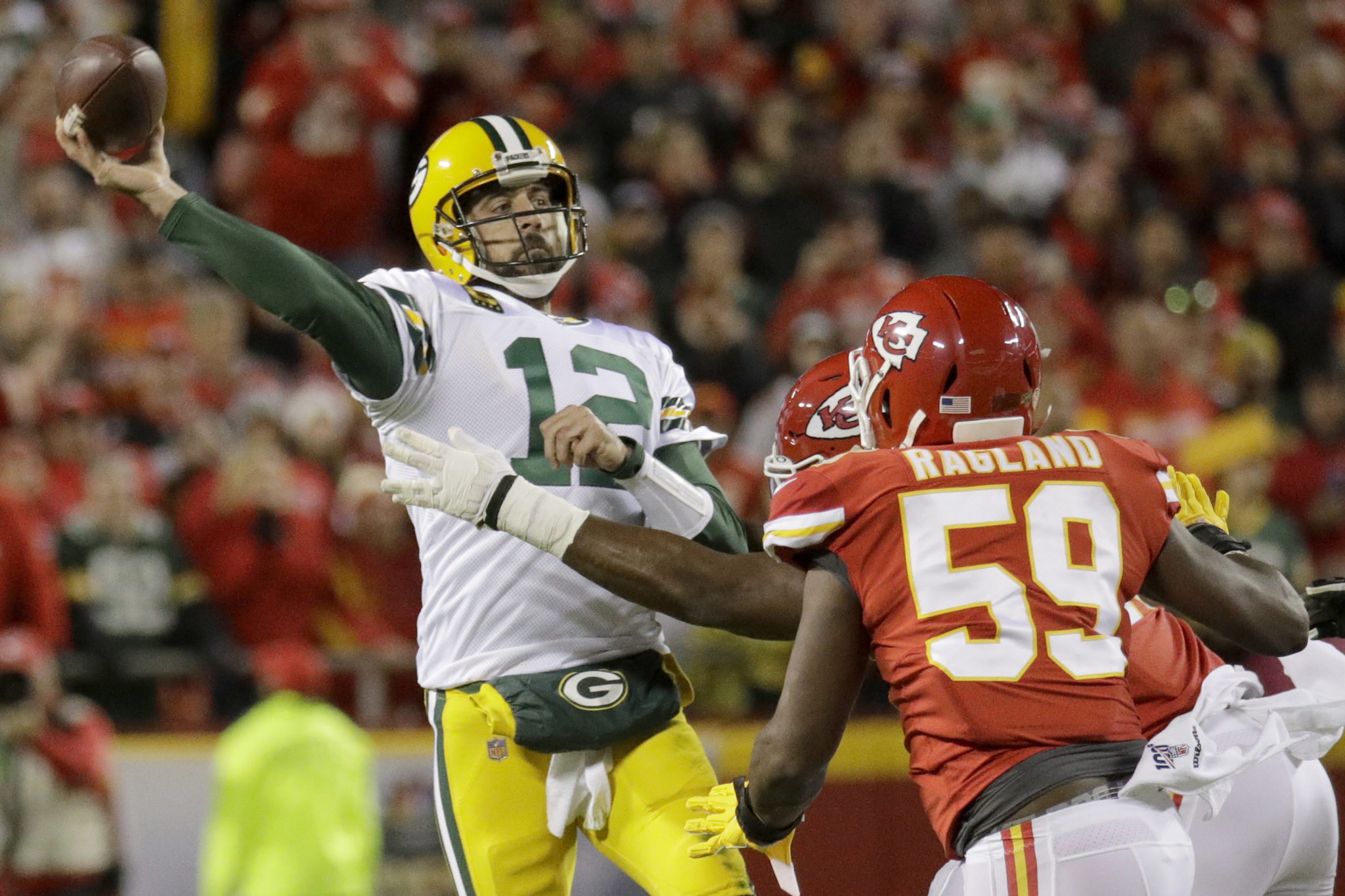 Aaron Rodgers threw for 305 yards and three touchdowns, two of them to Aaron Jones on a big night for the Green Bay running back, and the Packers held off backup quarterback Matt Moore and the Kansas City Chiefs 31-24 on Sunday night.

Jones, who briefly left with a shoulder injury, had seven catches for 159 yards and added 67 on the ground — a big chunk of them in the closing minutes, when the Packers (7-1) sealed the win.


With reigning league MVP Patrick Mahomes out with a dislocated kneecap, Moore took the reins of the Chiefs’ high-powered offense and fared quite well. He threw for 267 yards with two touchdowns and no interceptions in the ex-high school coach’s first NFL start in more than two years.

The Chiefs (5-3) hoped Mahomes could make a miraculous recovery 10 days after hurting his knee in Denver in time to play. But after he was limited in practice throughout the week, coach Andy Reid announced Friday that the franchise quarterback would be inactive for the game.

So much for that Rodgers-Mahomes showdown everyone anticipated.

They had to settle for an entertaining matchup between division leaders instead.

The game started like most people outside the walls of 1 Arrowhead Drive expected, with Rodgers slicing up the defense and Green Bay marching for two quick touchdowns.

But after a shaky start by Moore, the journeyman quarterback and the rest of the Chiefs offense found a groove. They embarked on an 89-yard drive that ended with a make-it-rain 29-yard TD pass to Travis Kelce, then got a 30-yard pitch-and-catch to Mecole Hardman to knot the game.

The Chiefs led 17-14 at halftime, raising some eyebrows across the league.

Green Bay coach Matt LaFleur made a couple of adjustments, though, and Rodgers and Co. began to move the ball once more. They used a 15-play drive that soaked up more than half the third quarter to get a tying field goal, then got the ball back when LeSean McCoy fumbled on the very next play.

Five players later, Rodgers conjured up more of his magic.

With third down at the 3, he dropped back and was flushed from the pocket. He rolled to his right and threw a blind pass to the back corner of the end zone, where Damien Williams somehow took the ball away from Chiefs linebacker Ben Niemann while tapping both feet inbounds.

Rodgers was lying flat on his back, staring at the sky, as the official signaled touchdown.

The Chiefs answered with another long drive, and just when it appeared they had finally been stopped, the Packers’ Tramon Williams was flagged for illegal use of hands. That gave Kansas City the ball inside the 5, and Damien Williams scored on the next play to tie it again.

It took the Packers all of 56 seconds to score the eventual winner.

Rodgers again found Jones out of the backfield, and this time he found a lane through the entire Kansas City secondary. It was a foot race from there, and the speedy running back hop-skipped over the goal line to finish off the 67-yard touchdown reception.

The Chiefs were forced to punt on their ensuing possession and never got another chance.