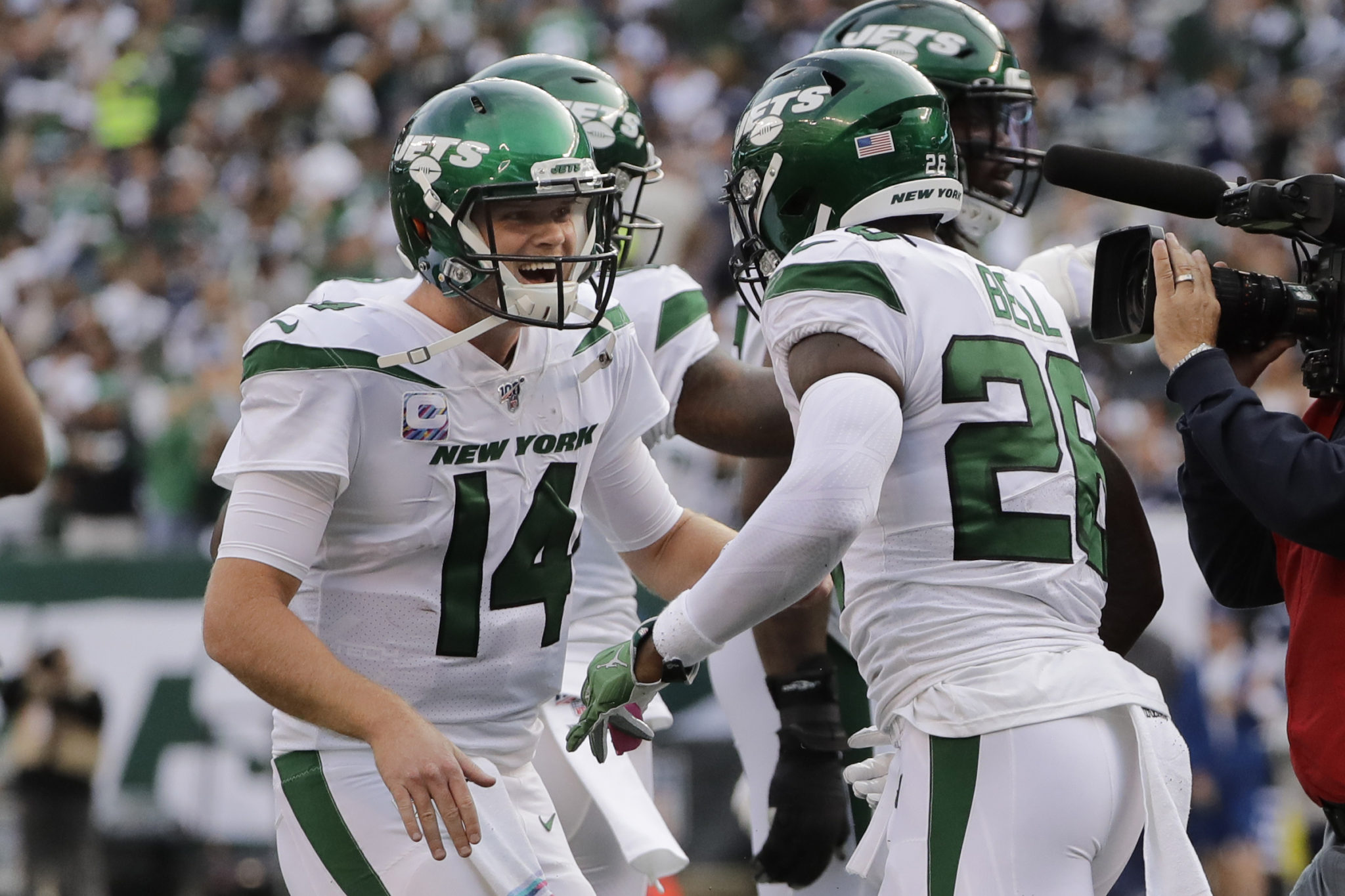 From the loud ovation the second-year quarterback received during pregame introductions to the smiles on the sideline, the impact of his return was clear.

Then, he took the field.

“Him coming back gave the team, our offense, a new life,” wide receiver Robby Anderson said during a conference call Monday. “He’s our starting quarterback and he brings a lot of upside, and there’s a lot in store with him.”

Darnold showed no signs of rust in a 24-22 victory over Dallas on Sunday after missing three games while recovering from mononucleosis. He was 23 of 32 for 338 yards and two touchdowns — a 92-yarder to Anderson and a 5-yarder to Ryan Griffin — and an interception.


The Jets put up 382 yards of total offense against the Cowboys after getting 233 combined in the last two games with practice squad player-turned-starter Luke Falk at quarterback.

It all resulted in New York’s first win of the season, and first under coach Adam Gase.

“We’ve got to just continue to work out the details,” Darnold said of the offense. “Obviously, we got the win, which was awesome. Our defense played great. We played good at times, but there’s a lot of things we can clean up.

“I think we left a lot of points on the field.”

Still, it was a huge positive step after the Jets — particularly the offense — barely resembled an NFL-caliber squad during Darnold’s absence.

It was also proof that New York isn’t exactly the bunch that people were making fun of the past three games during losses to Cleveland, New England and Philadelphia.

“We’ve got to build off each week, good or bad,” Gase said. “Those three weeks where Sam was out, those were some tough learning experiences for us. … We really didn’t give ourselves much of a chance.”

Everything, for the most part, seemed to be clicking with Darnold back in action. A big key was the offensive line, which was maligned for much of the first four games. It’s still a work in progress as Gase tinkers with personnel, but the five big guys up front gave Darnold ample time to make plays against Dallas, and his ability to quickly improvise certainly helped.

After allowing an NFL-leading 23 sacks through four games, the Jets’ offensive line gave up just two — both by Robert Quinn — against the Cowboys.

The running game. It seems silly to say that with Le’Veon Bell leading the way, but the Jets are averaging just 64 yards rushing per game. That ranks them 30th in the league, ahead of Miami (58.2) and Cincinnati (56.5).

Bell has run for 256 yards as a workhorse out of the backfield on 85 carries. But that’s good for only a 3.0 average. With Darnold back and defenses unable to constantly stack the box anymore while not fearing New York’s passing game, Bell and the rest of the Jets’ backfield should start seeing some running lanes.

Anderson. The speedy receiver was mostly a non-factor through the first four games, catching 11 passes for 131 yards and no touchdowns.

He broke out with five receptions for 125 yards, including the 92-yard touchdown, in the win over Dallas. Having that deep threat is a huge key to the Jets’ success by keeping defenses honest.

Leonard Williams. The defensive lineman’s name has come up in trade rumors, and Gase did little to defuse them. Teams are asking about him, but the Jets aren’t actively shopping him — although a deal by the Oct. 29 deadline isn’t out of the question.

“I really don’t deal in the hypotheticals,” Gase said, adding that GM Joe Douglas and his staff frequently get calls about players and potential trades and signings.

“I haven’t had any of those conversations, so I don’t know what other teams are thinking,” he said. “But right now, I like the way that our guys are rolling. Anything’s always possible. Right now, I like how our team is.”

Left tackle Kelvin Beachum has a sprained ankle that could sideline him a few games. Brandon Shell, formerly the starting right tackle, replaced him against Dallas and could do so while he’s out. … Linebacker C.J. Mosley has missed the last four games with a groin injury, but Gase expressed optimism that he could return to practice this week. … Defensive end Henry Anderson (shoulder), cornerback Nate Hairston (knee), linebacker Neville Hewitt (stinger) and nose tackle Steve McLendon (hamstring) are day to day.

92 — With his 92-yard touchdown toss to Anderson, Darnold became the youngest player in the Super Bowl era — at 22 years, 30 days old — to throw a TD pass of 90 or more yards. It was also the longest play from scrimmage in the NFL this season.

The Jets got their first win but take on AFC East rival — and undefeated — Patriots on Monday night. They’ll be hard-pressed to pull off a two-game winning streak but should fare better than the 30-14 loss in New England three weeks ago with Falk making his first NFL start.

“It was good for the guys to go through it and see here’s where we’re at right now,” Gase said. “We’ve got to get better fast. We’re not going to have a lot of room for error. We’ve got a tough opponent coming up this week, so we have to do a good job of finding a way of just getting better this week.”