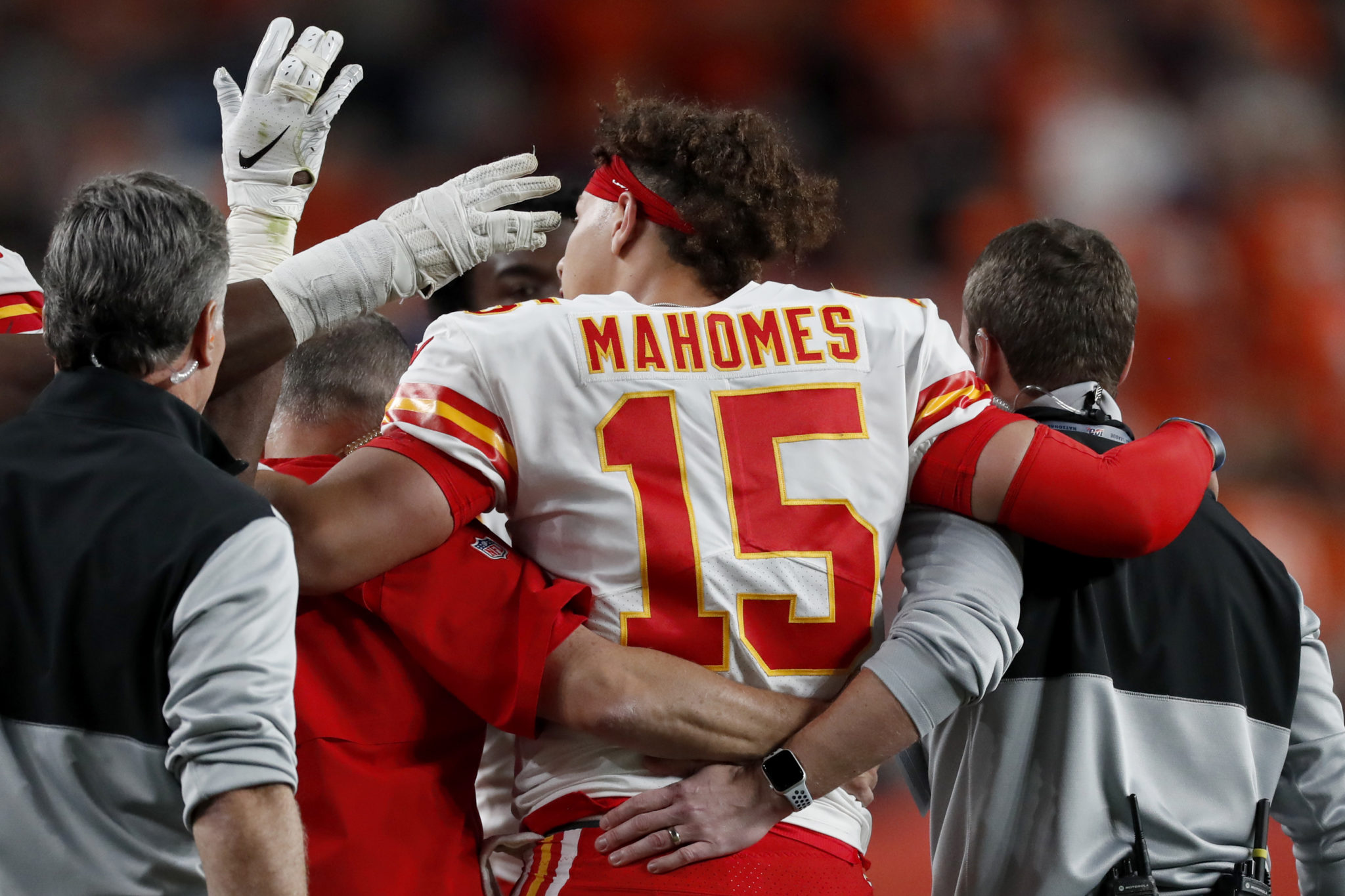 Reigning MVP Patrick Mahomes injured his right knee in a pileup near the goal line before his Kansas City teammates rallied around their fallen superstar for a 30-6 thrashing of Denver on Thursday night.

Backup Matt Moore threw a 57-yard touchdown pass to Tyreek Hill and the Chiefs (5-2) had nine sacks, gave up a season-low 71 yards rushing and snapped a two-game skid in beating the Broncos (2-5) for the eighth straight time.

His balky left ankle heavily taped, Mahomes completed 10 of 11 passes for 76 yards and a touchdown before he got hurt on a successful sneak on fourth-and-inches at the Denver 5 early in the second quarter.

One by one, players peeled off the pile but when Mahomes didn’t get up , the stadium grew quiet, Broncos players knelt and some Chiefs stormed away in aguish as their quarterback ripped off his helmet and covered his face.

As players milled about nervously, the Chiefs’ medical personnel appeared to pop Mahomes’ right knee back in place before he was helped from the field and taken into the locker room. The Chiefs announced minutes later that Mahomes had a knee injury and wouldn’t return.


The Broncos had won two straight after a winless September and were hoping to turn the AFC West upside down by handling the Chiefs their third straight loss.

Coming in, the Chiefs were ranked 24th in the league with 11 sacks and they’d allowed an average of 190 yards rushing over their previous four games.

At one point, Fox NFL analyst Troy Aikman exclaimed, “This is about as bad an offense as I’ve seen. I’m shocked there’s as many people still here at the game.”

There weren’t for very much longer as the fans streamed to the exits with the never-ending bungled plays by the Broncos, especially the porous O-line that was jeered by frustrated fans.

The Chiefs even sacked punter Colby Wadman, who had nowhere to throw the ball on a failed fake punt that gave Kansas City the ball at the Broncos 38 on the drive that ended with Mahomes’ injury.

After Mahomes got hurt, Moore couldn’t get the Chiefs into the end zone on three plays from the 3, and Harrison Butker’s 20-yard field goal gave KC a 13-6 lead.

Flacco, who was sacked five times and knocked down eight more times in 15 first-half drop-backs, was sack-stripped by linebacker Anthony Hutchins on the next series and linebacker Reggie Ragland scooped up the loose ball at the 5 and rumbled into the end zone for a 20-6 halftime lead.

Brandon McManus missed a 45-yard field goal that sailed well above the top of the right upright.


The Broncos scored first after getting a reprieve on a three-and-out when Frank Clark’s face mask gave Denver a first down and Royce Freeman took it in from a yard out seven plays later. But Fangio decided to take the extra point off the board and go for 2 when Alex Okafor was whistled for encroachment.

Instead of handing the ball off to Freeman again, Fangio had Phillip Lindsay, who’s about 50 pounds lighter, pound the ball up the middle and he was stuffed, leaving the Chiefs celebrating instead and the crowd no longer buzzing.

Their 6-0 lead was short-lived as Mahomes somehow escaped the clutches of Von Miller and fired a pass that safety Will Parks tipped but Mecole Hardman reigned in anyway before avoiding sidestepping safety Kareem Jackson for a 21-yard score .

Hardman added a 37-yard punt return that led to a 33-yard field goal.

Parks left the game with a hand injury and didn’t return and Broncos rookie linebacker Justin Hollins left with a knee injury.