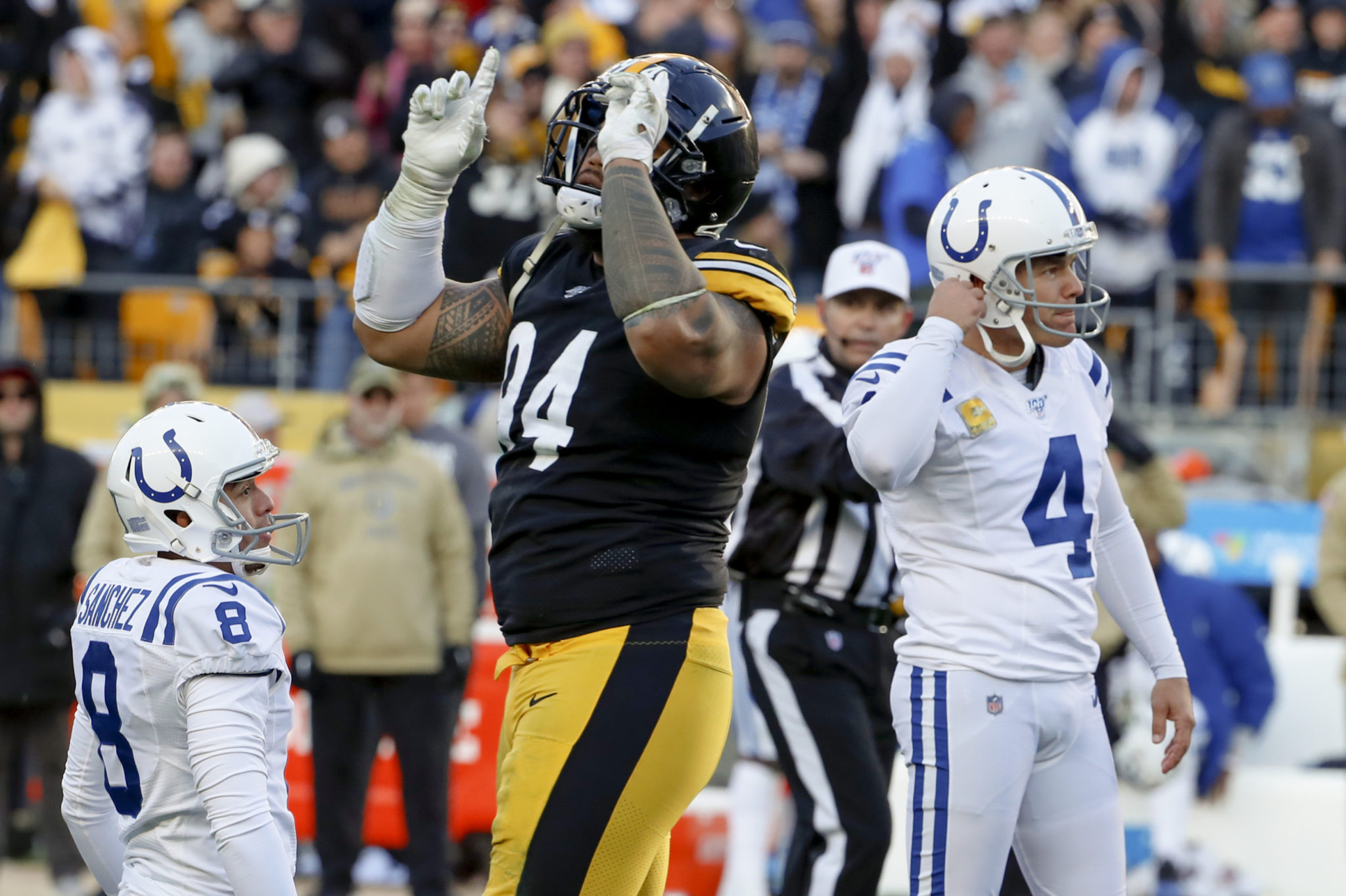 Not this time, Adam Vinatieri.

The Indianapolis Colts kicker missed a go-ahead 43-yard field goal with 1:14 remaining, helping the Pittsburgh Steelers escape with a 26-24 victory on Sunday.

Vinatieri, whose 55-yard kick last week against Denver gave the Colts their third straight victory, pulled his attempt left of the uprights as the Colts (5-3) fell out of first place in the AFC South.

Mason Rudolph threw for 191 yards with a touchdown and an interception for Pittsburgh, and Minkah Fitzpatrick returned an interception 96 yards for a score as the Steelers (4-4) won their third consecutive game. Backup running back Trey Edmunds ran for a career-high 73 yards and Chris Boswell kicked four field goals as Pittsburgh reached the midpoint of the season at .500 despite losing quarterback Ben Roethlisberger to a right elbow injury in Week 2.


The Colts may have quarterback issues of their own after Jacoby Brissett left in the second quarter with a left knee injury. Brian Hoyer came on and threw for three touchdowns in Brissett’s absence and drove Indianapolis to well within field goal range in the final minutes thanks in part to a 40-yard pass interference penalty against Pittsburgh’s Steven Nelson.

Vinatieri, the NFL’s all-time leading scorer, had an extra point blocked in the third quarter and has been dealing with accuracy issues all season. The snap and hold were good, but his kick fluttered left of the upright into the open end of Heinz Field, allowing Pittsburgh to run out the clock on a day the Steelers mustered just 273 total yards.

Hoyer’s first extended playing time since Oct. 15, 2017 — while playing for San Francisco — was a mixed bag. He entered in the second quarter when Brissett went down after an Indianapolis offensive lineman fell on him as he stood in the pocket. Hoyer’s first pass turned into an 11-yard touchdown to Doyle that gave the Colts a 10-3 lead. Hoyer had Indianapolis driving again later in the second quarter when he tried to connect with Doyle again near the goal line.

Fitzpatrick stepped in front of it and ran 96 yards for a touchdown to tie the game, the second-longest pick six in the regular season in franchise history behind Martin Kottler’s 99-yard return against the Chicago Cardinals in 1933, back when the Steelers were known as the Pirates.

Undaunted, Hoyer kept coming. He drove the Colts 75 yards in six plays, the last 14 coming on a strike to Zach Pascal that put Indianapolis back in front 16-10.

The Colts handed the Steelers a gift field goal attempt at the end of the first half that allowed Pittsburgh to close within 16-13. Rudolph hit Vance McDonald with a short pass, and the tight end was gang-tackled at the Indianapolis 48 as time ran out in the half. Colts linebacker Darius Leonard was flagged for unnecessary roughness, pushing the ball to the Indianapolis 33. Boswell was good from 51 yards.