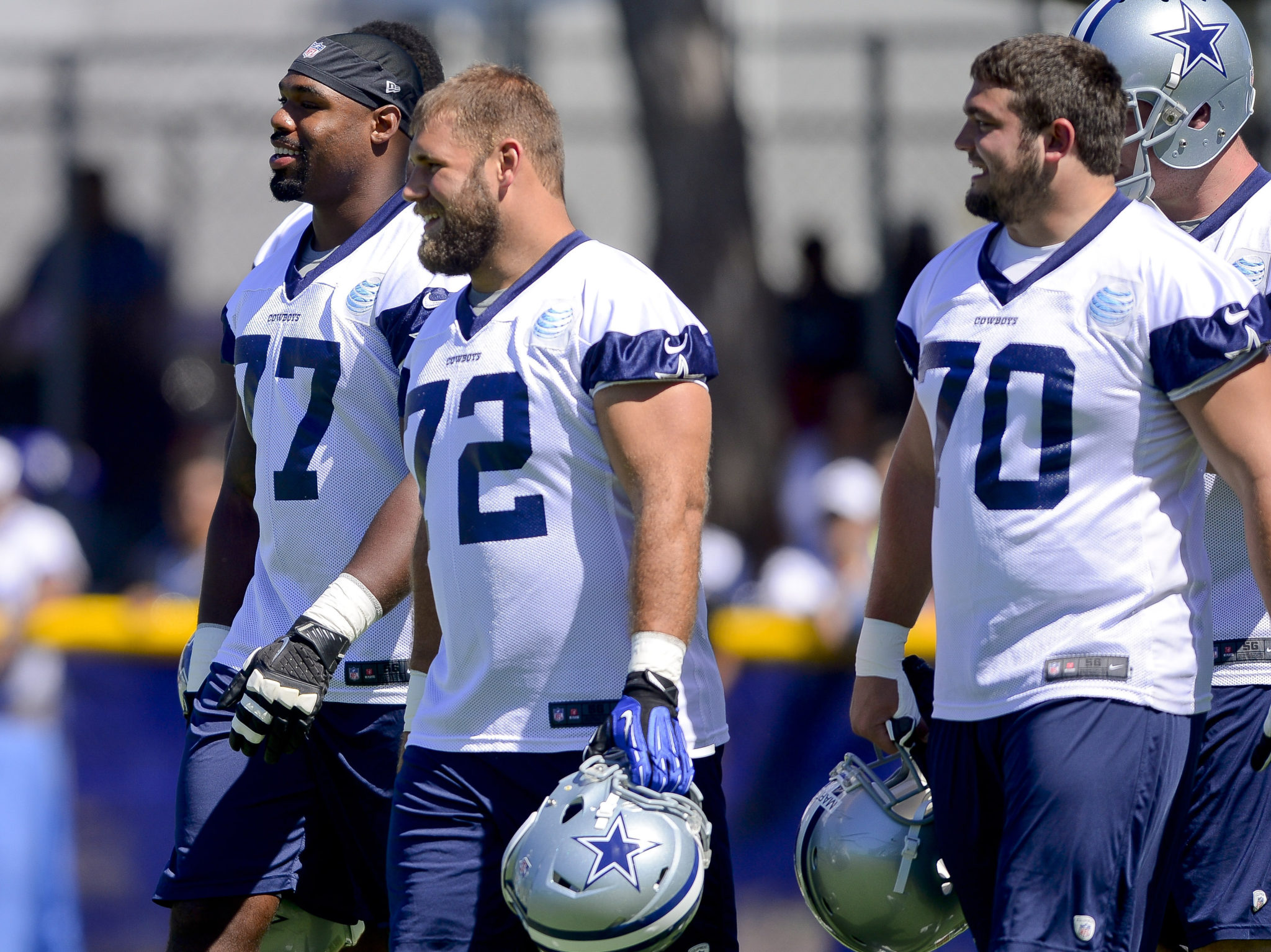 Travis Frederick didn’t fully understand the business of football when the Dallas Cowboys drafted their center six years ago and made him an instant starter.

Eventually, the four-time Pro Bowler saw what Dallas was trying to build by using first-round picks on offensive linemen three times in four drafts after never having taken a blocker that high in 22 years under owner and general manager Jerry Jones.

The Cowboys have become consistent winners behind the line with the NFL’s highest salary cap figure. While Dallas isn’t the only example of a club benefiting from a heavy investment up front, the New England Patriots are several notches higher than Dallas as an elite team with a more frugal approach.


“You’ll never see your skill live up to its potential if you’re not good on the offensive and defensive lines,” Cowboys coach Jason Garrett said. “That’s just something I always believed in.”

After Garrett took over midseason in 2010 with an aging line, the Cowboys’ first pick in the next draft was tackle Tyron Smith ninth overall. Frederick went late in the first round in 2013, and guard Zack Martin in the middle of the opening round a year later.

Dallas hit on all three choices, and therefore had to pay each. That’s why the Cowboys top the list of salary cap numbers for offensive lines at $53 million, according to overthecap.com.

Since adding Martin to complete the core of the Dallas front, the Cowboys have made the playoffs three times in five seasons — including both years that Ezekiel Elliott won rushing titles.

While Dallas hasn’t made the long postseason run that has eluded the franchise since the last of five championships nearly 25 years ago, the two playoff victories in the past five seasons are one more than the Cowboys had the previous 17 years.

The Patriots are on the verge of a 19th straight winning season despite ranking near the bottom of the league in spending on the offensive line at $23.8 million. Protecting Tom Brady has been the most important thing on the way to six Super Bowl titles because the running game has generally been secondary.

Two years ago, New England left tackle Nate Solder was perhaps the most-coveted left tackle in free agency, and the Patriots let him go at age 29 and two years removed from a torn biceps. Solder hasn’t been the same for the New York Giants, who are 7-19 since signing him.

There is only one lineman, right tackle Marcus Cannon, among the top 10 salary cap figures for the Patriots.

Baltimore, with the NFL’s best running quarterback in MVP candidate Lamar Jackson, has the highest-rated line in the NFL, according to Pro Football Focus, while ranking 27th — two spots ahead of the Patriots — in cap spending. Three linemen are on rookie deals, and another is an undrafted free agent.

Oakland coach Jon Gruden has stressed building the offensive line ever since returning to the Raiders before last season. He used a first-round pick to draft left tackle Kolton Miller his first season and took another tackle, Brandon Parker, in the third round.

The Raiders then gave right tackle Trent Brown the richest deal ever for a lineman in free agency last March, signing him to a $66 million, four-year deal. Oakland also added left guard Richie Incognito in free agency and gave center Rodney Hudson a $33.75 million, three-year extension before the start of this season.

The moves have paid off as the Raiders have allowed a league-low 37 quarterback pressures through the first nine weeks, leading to a big rebound season from quarterback Derek Carr for a playoff contender.

“I’m a huge believer in building the offensive line, and you get around that group and watch what’s going on and he is the quintessential glue player,” general manager Mike Mayock said of Hudson. “We thought it was really important as we continue to develop this offensive line.”


While left tackle has long been the highest-paid position because of protecting a QB’s blind side, the value of guards has gone up in recent years.

The Cowboys’ Martin has the highest annual average among guards after signing a six-year, $84 million extension with $40 million guaranteed in 2018. Over the past five years, the average annual salary cap value among the top five right guards has increased 65%.

Tennessee used a first-round pick to get Taylor Lewan in 2014 and made him the highest-paid left tackle at an average of $16 million per season last year.

The Titans have made the playoffs just once in that span, winning a wild-card game in 2017, and Lewan is fourth in the NFL in penalties this season for a 5-5 team outside the postseason picture at the moment.

“It’s crazy. It’s horrible,” Lewan said. “I cannot get penalties. I’m sorry. There’s no need to ask about it because I know I’m an absolute liability when it comes to penalties.”

The burden of expectations comes with the heavy investments, but Frederick doesn’t think that’s why things have paid off for the Cowboys.

“It all really comes down to you doing your job,” Frederick said. “It has nothing to do with the fact that they put three first-round picks into it and that you’re supposed to be a group that’s lived up to some sort of pressure or expectation.”

With the line Garrett advocated for building, the pressure is on a coach in the final year of his contract to take the Cowboys further in the playoffs than they’ve been in a long time.