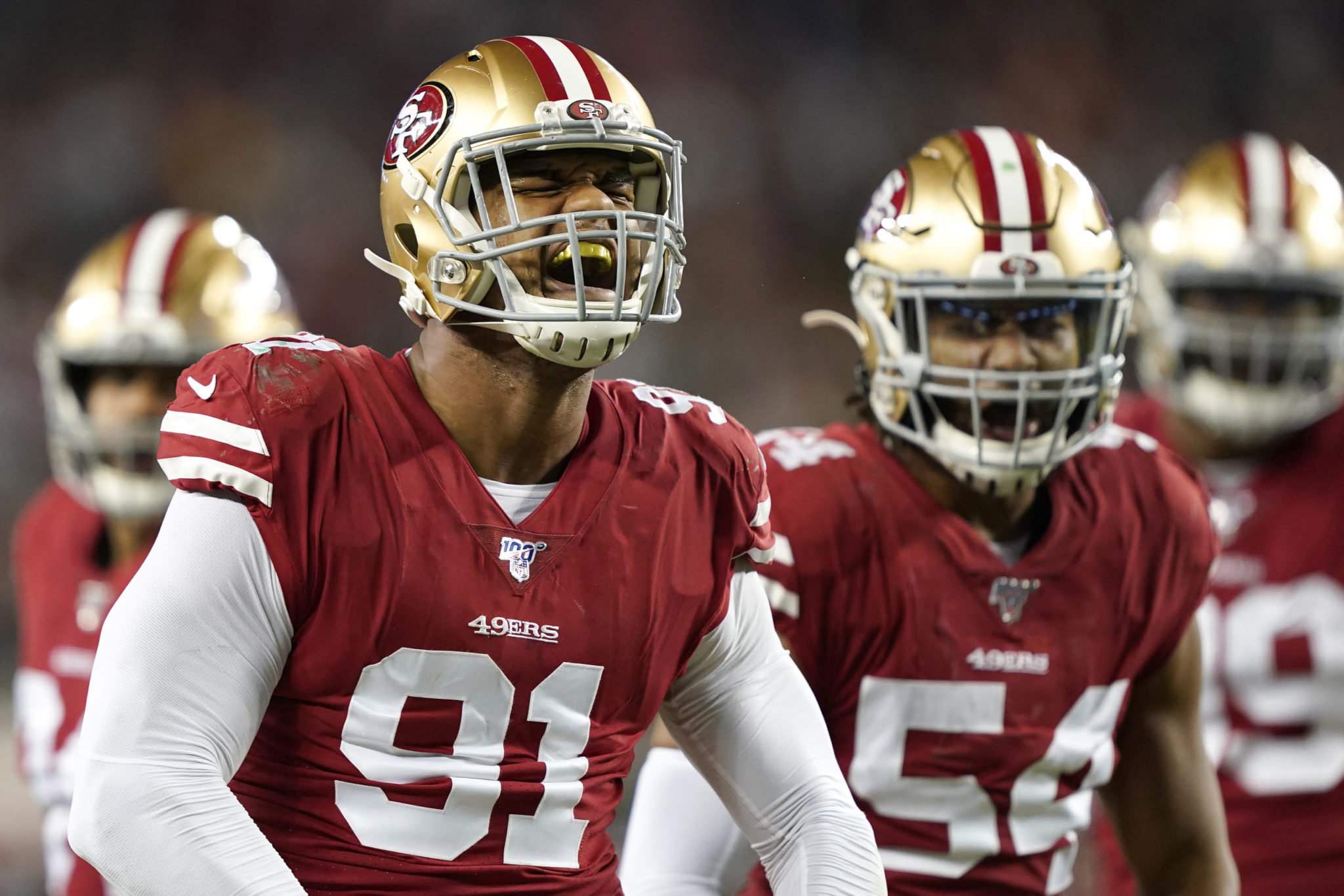 With heavy pressure off the edge and lockdown coverage in the secondary, the San Francisco 49ers dominant defense forced Aaron Rodgers into the least efficient game of his career.

Having similar success against the NFL’s most exciting quarterback will be a far different challenge this week. The 49ers (10-1) travel to Baltimore on Sunday to face Lamar Jackson and the Ravens (9-2).

Jackson is being talked up as an MVP candidate after accounting for 30 touchdowns on the ground and through the air and helping Baltimore average more than 40 points a game over the last five contests.


San Francisco has one of the top defenses in the game this season as evidenced by last week’s 37-8 win over Green Bay when the Niners held Rodgers to a career-low 3.2 yards per attempt.

The 49ers have allowed the fewest yards (248 per game), recorded the most sacks (44) and rank second best in points allowed (14.8) per game. They have been especially strong in the passing game where the 136.9 yards allowed per game are the lowest in the NFL in 37 years.

But if San Francisco has struggled at all this season, it has come against the more mobile quarterbacks, especially during a three-game stretch that featured two games against Arizona rookie Kyler Murray around a matchup against Seattle’s Russell Wilson.

Those are the only games all season when San Francisco allowed more than 20 points. The Niners allowed 26 points per game against three teams compared to 10.6 the rest of the season.

“You always go back and look to what worked, what didn’t, how you can get better,” defensive coordinator Robert Saleh said. “So, you’re always trying to evolve. And then of course, this scheme is much different than those two. They’re completely different schemes. The whole idea of when he’s a passer, to me, stays the same, with respect to your rush lines, but with regards to the run game and how they use him is much different than the way they do Kyler and Russell.”

While Murray and Wilson are passers first who look to extend plays with their legs and scramble for big plays when the opportunity arises, running is a much bigger part of Jackson’s game, whether by designed plays or scrambles.

Jackson is averaging 79.6 yards rushing per game, more than any quarterback has had in any season since the merger. The previous high was 69.1 for Chicago’s Bobby Douglas in 1972.

“He’s just different in that he’s a running back when he has the ball,” coach Kyle Shanahan said. “You know, the other two guys, they can make a lot of plays with their legs and stuff, but eventually, they are going to slide and things like that. This guy, he’s a running back out there, and a quarterback when he’s throwing, but he can run hard. You’ve got to bring him down. He can take the hits and he also can deliver them.”


What makes dealing with the Ravens so difficult is that defenses need to have the speed to keep up with Jackson in the running game and burner Marquise Brown in the passing game.

But sacrificing strength for speed can be detrimental against coordinator Greg Roman’s offense that uses multiple tight ends the second most often in the league this season as part of a power-running game that features Mark Ingram and Gus Edwards, who are both averaging more than 5 yards per carry.

“That’s a lot of the challenge is that they are a downhill, power running football team,” Saleh said. “Then you implement the read-zone stuff that is kind of designed to spread you out and do all that stuff. He’s got a good system going, so it’s going to be a good challenge. They’re a physical bunch. We’ve got to bring it to them.”