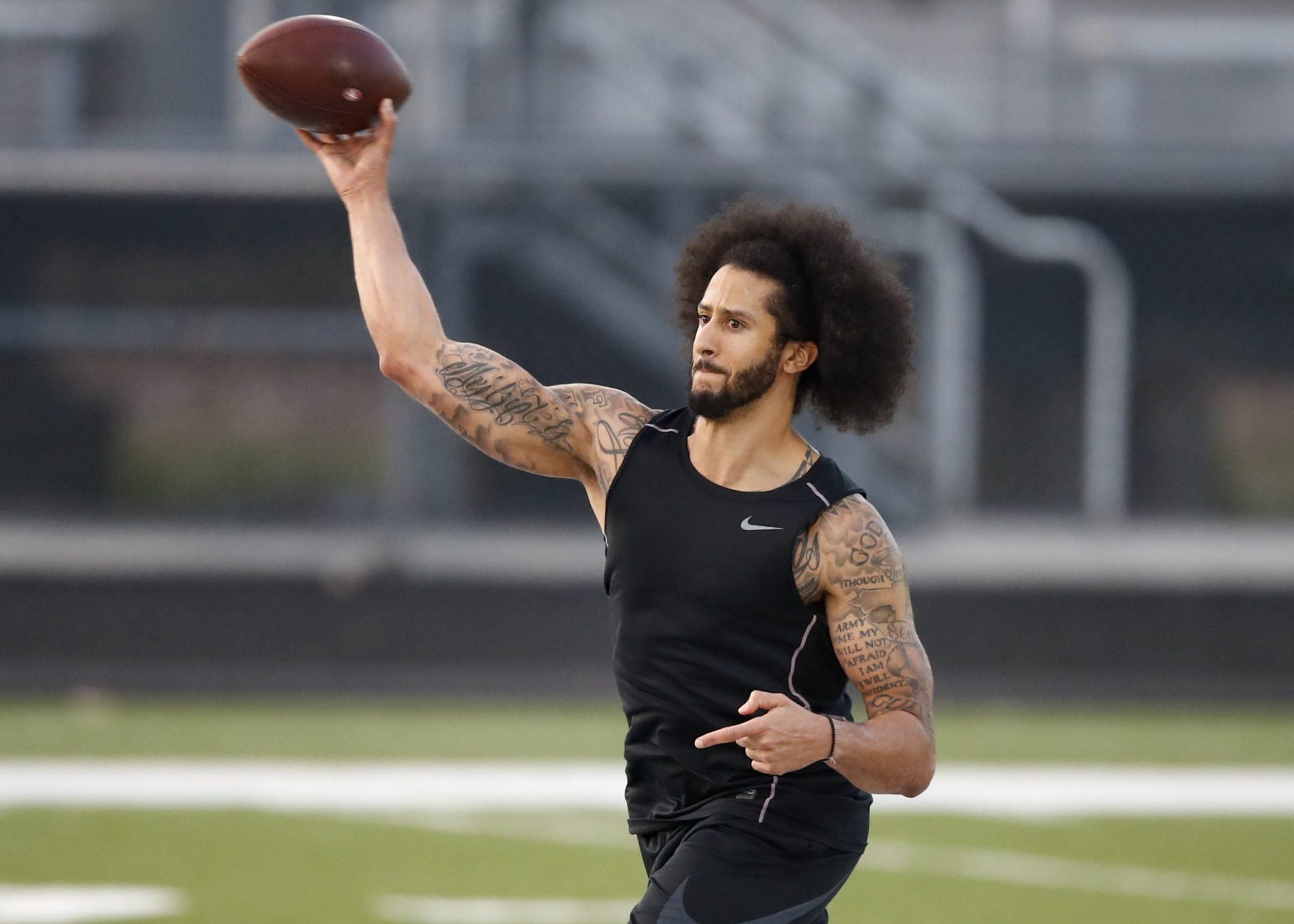 Colin Kaepernick threw passes for about 40 minutes on a high school field, then signed autographs for hundreds of fans who gathered in an end zone to watch his NFL workout that was suddenly moved Saturday, the latest strange twist in the saga for the exiled quarterback.

About six team representatives made it to the new location, including Philadelphia Eagles vice president of football operations Andrew Berry. It appeared the Jets, Redskins and Chiefs also had someone in attendance.

Just 15 minutes before Kaepernick was scheduled to work out for 25 NFL teams at the Atlanta Falcons’ training complex in Flowery Branch, his representatives announced the session had been moved 60 miles away to a high school in Riverdale. The stunning move seemed to catch everyone off-guard and came about an hour before the rescheduled workout was set to begin, putting many in scramble mode.


Kaepernick’s representatives said they called the audible to let the media watch and videotape the workout, adding the shift was prompted “because of recent decisions made by the NFL.”

“From the outset, Mr. Kaepernick requested a legitimate process and from the outset the NFL league office has not provided one,” his representatives said in a statement.

In a statement, the NFL said it was “disappointed that Colin did not appear for his workout.” The league referenced recent negotiations with Kaepernick’s representatives over the workout and citing, among others, media availability and a liability waiver.

“Colin’s decision has no effect on his status in the league. He remains an unrestricted free agent eligible to sign with any club,” the NFL said.

The 32-year-old Kaepernick hasn’t played since the 2016 season with the San Francisco 49ers. He helped start a wave of protests about social and racial injustice that season by kneeling during the national anthem at games.

The NFL in February settled a collusion grievance Kaepernick and former teammate Eric Reid filed against the league. Reid now plays for the Carolina Panthers.

Reid was at Kaepernick’s workout at the new high school site.

Earlier in the afternoon, a number of NFL scouts had already gone inside the Falcons’ indoor training facility when word came Kaepernick’s session was being shifted. It was moved from the sprawling suburbs north of Atlanta to Charles Drew High School in Riverdale — south of the city, near the Hartsfield-Jackson Atlanta International Airport.

Dozens of media had been set up in a fenced-off parking next to the Falcons’ facility. Former NFL head coaches Hue Jackson and Joe Philbin had been set to run the drills.

Kaepernick’s representatives said the NFL “demanded” as a precondition for this workout that he sign an “unusual liability waiver.” The reps said Kaepernick asked that media and an independent film crew be allowed to attend and videotape the original workout, and that the NFL denied the request.

“Based on the prior conduct by the NFL league office, Mr. Kaepernick simply asks for a transparent and open process which is why a new location has been selected for today,” the representatives said.