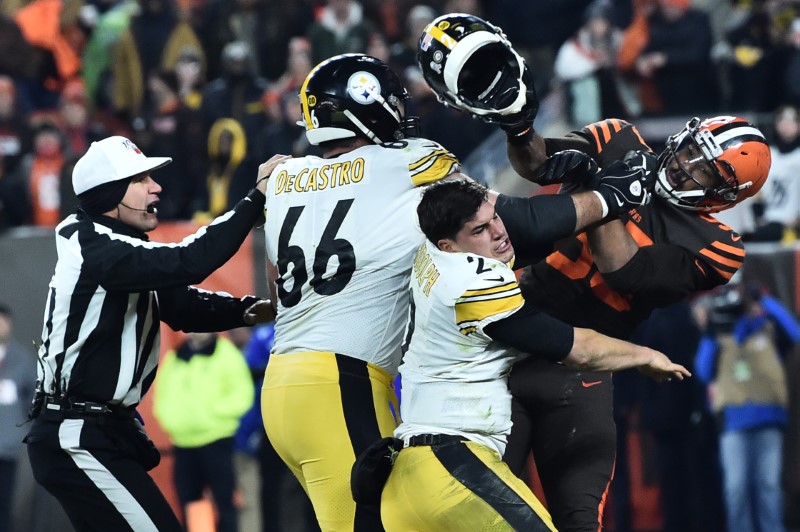 Cleveland Browns defensive end Myles Garrett has been handed a record indefinite suspension for using a helmet to attack another player, the National Football League (NFL) said on Friday.

Garrett, who Cleveland took first overall in the 2017 NFL draft, will miss the rest of the regular season and any playoff games and must meet with the commissioner’s office before a decision on his reinstatement will be taken.

Cleveland has six regular season games remaining, meaning that Garrett’s punishment is the longest suspension handed out by the NFL for a single on-the-field act.

Garrett, one of the league’s top defensive players, was ejected in the closing seconds of Thursday’s game in Cleveland after he ripped the helmet off Pittsburgh Steelers quarterback Mason Rudolph and then struck him in the head with it.

“I lost my cool and what I did was selfish and unacceptable,” Garrett, 23, said in a statement. “I know that we are all responsible for our actions and I can only prove my true character through my actions moving forward.

“I want to apologize to Mason Rudolph, my teammates, our entire organization, our fans and to the NFL. I know I have to be accountable for what happened, learn from my mistake and I fully intend to do so.”


A melee began when Garrett wrestled Rudolph to the ground after the quarterback had thrown the ball. Rudolph grabbed at Garrett’s helmet before Garrett ripped off Rudolph’s helmet.

The NFL said in a statement Garrett “violated unnecessary roughness and unsportsmanlike conduct rules, as well as fighting, removing the helmet of an opponent and using the helmet as a weapon.”

The incident sparked a brawl between both teams, which were each fined $250,000 by the league. The NFL said other players, including those who left the bench to enter the fight area, will be sanctioned in due course.

Pittsburgh’s Maurkice Pouncey, who punched and kicked at Garrett, was suspended three games while Cleveland’s Larry Ogunjobi was banned one game for pushing Rudolph to the ground from behind after his helmet was off.

The three players were all suspended without pay and fined additional amounts. They each have three business days to file an appeal.

The Browns and Steelers organizations expressed disappointment in the events that transpired during Thursday’s nationally televised game.

“There is no place for that in football and that is not reflective of the core values we strive for as an organization,” Browns owners Jimmy and Dee Haslam said in a statement. “We sincerely apologize to Mason Rudolph and the Pittsburgh Steelers.”

“Myles Garrett has been a good team mate and member of our organization and community for the last three years but his actions last night were completely unacceptable. We understand the consequences from the league for his actions.”

Steelers President Art Rooney said it was a shame that the game, which Cleveland won 21-7 to keep their playoff hopes alive, ended in the manner it did.

“The actions of the players involved were not something that should be part of any football game,” said Rooney. “Our players, coaches and everyone in the Steelers organization understand that we must always maintain composure, no matter what happens.”

Prior to Garrett’s suspension, the stiffest ban for a single on-the-field act came in 2006 when former Tennessee Titan Albert Haynesworth was suspended five games after he stomped on the face of a helmetless Dallas Cowboys player.

“There are many risks an NFL QB assumes with every snap taken on the field. Being hit on your uncovered head by a helmet being swung by a 275 lb DE is not one of them. Tonight could have had a catastrophic ending. The matter will be reviewed thoroughly,” Younger said on Twitter.

According to an ESPN report, Younger said no legal options are being ruled out. When reached by Reuters on Friday Younger said his Twitter comment is his only statement at this time.

It is not the first time Garrett has been disciplined by the league as he was fined $42,112 in September for two hits he made on New York Jets quarterback Trevor Siemian.