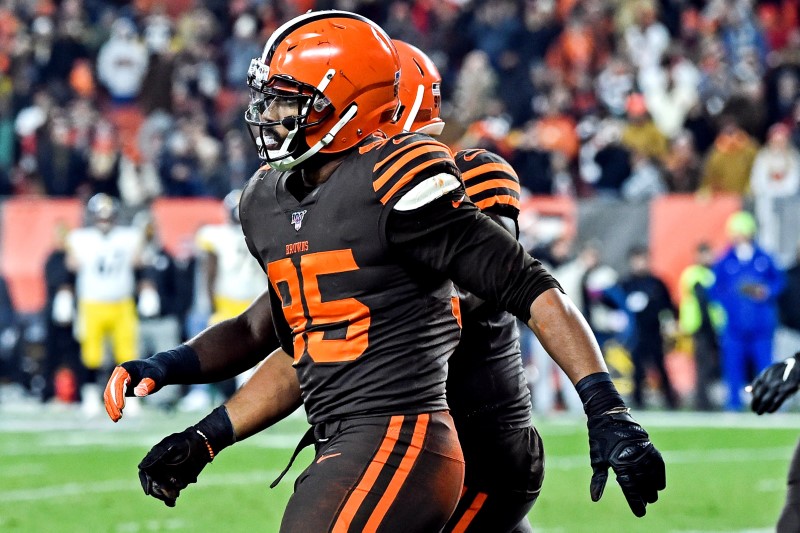 Cleveland Browns defensive end Myles Garrett’s suspension for his role in a brawl with the Pittsburgh Steelers last week was upheld on Thursday, ensuring he will miss at least the rest of the 2019 season.

Appeals officer James Thrash made the ruling, which will keep Garrett out of Cleveland’s final six regular-season games and any postseason games — if the Browns qualify — before having to apply for reinstatement from commissioner Roger Goodell in 2020.

In a statement released Thursday, the league also announced that Steelers center Maurkice Pouncey’s three-game suspension was reduced to two games. Appeals officer Derrick Brooks ruled on Pouncey, who will miss Sunday’s contest at Cincinnati and a Week 13 rematch with the Browns.


In addition to forfeited game checks during their suspensions, Garrett will be fined $45,623, and Pouncey will be fined $35,096. Browns defensive tackle Larry Ogunjobi’s one-game suspension was upheld a day earlier, though his fine was dropped.

The brawl began in the waning seconds of the Browns’ win last week, when Garrett got into a scrap with Steelers quarterback Mason Rudolph, removed the QB’s helmet and struck Rudolph’s unprotected head with it. Pouncey then jumped on Garrett and threw several punches and kicks, and Ogunjobi shoved Rudolph from behind.

ESPN reported earlier Thursday that Garrett said at his appeal hearing that Rudolph used a racial slur prior to the melee. Garrett’s hearing, which was held Wednesday in New York, reportedly lasted less than two hours.

Through the team and his lawyer, Rudolph strongly denied Garrett’s accusation. His media session scheduled for Thursday was canceled.

NFL spokesman Brian McCarthy told Pro Football Talk later Thursday that the league “looked into it and found no such evidence.”


It is not known if on-field microphones caught any exchange between the players. Teams typically have a microphone in the shoulder pads of the center or guards, allowing for audio of the quarterback’s cadence on a broadcast.

Per ESPN’s Jake Trotter, multiple Browns said Thursday that it was the first they had heard about the accusation of a racial slur.

Rudolph is expected to be fined for his involvement in the scuffle. He appeared to grab at Garrett’s helmet and facemask while the two scrapped on the turf.