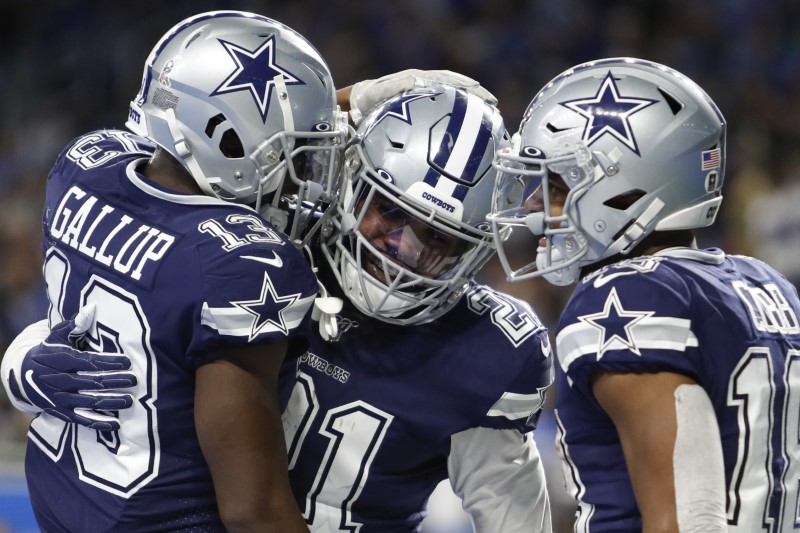 At 4-6, the Browns remain playoff long shots, but they’ve unveiled perhaps the league’s most important schematic wrinkle in the past two weeks.

Since Kareem Hunt returned from suspension, the Browns have totaled only 40 points and averaged 4.93 yards per play (below their season average, 5.55).

And yet, Hunt’s return has revolutionized the offense, inspiring Freddie Kitchens’ “Pony” package (two running backs), which has been the offense’s lifeblood in consecutive wins.

Against the Bills, the Browns ran a whopping 31 plays with both Nick Chubb and Hunt on the field, gaining 219 yards (7.06 average) despite a few execution errors. That included 126 rushing yards on 13 carries, seven of which gained 8-plus yards.


Five days later, Cleveland ran 18 plays in “Pony” personnel against Pittsburgh, gaining 132 yards (7.33 average). Baker Mayfield was 6 of 9 for 91 yards on such plays, including a 41-yard strike to KhaDarel Hodge after leveraging both backs for misdirection.

Hunt is a fascinating player. He’s extremely physical but also an outstanding receiver with great lateral agility, suddenness and acceleration. He already has 13 receptions for 90 yards, even beating Steelers cornerback Cameron Sutton at times, a rarity for a back.

Hunt has done everything in these packages, playing wide, in the slot, fullback and even tight end. He’s lead-blocking (with great effort), jet-sweeping (often as a decoy), catching a screen, or running a route on any given play. His presence, often with motion, helps define the defense and reveal coverages.

Kitchens has clearly invested in this package, running it in 20 (3WRs), 21 (two WRs), 22 (one WR) and even 30 (three RBs, two WRs) personnel. He’s already used eight o 10 different run designs, several variations of jet and star motion, a handful of RPOs and many of the Browns’ base concepts — all tweaked to incorporate both Chubb and Hunt.

Altogether, the Browns have gained 7.16 yards per play on 49 “Pony” snaps, compared to 3.65 on 85 others. That volume is unheard of for two-RB sets, but the efficiency demands more.


Perhaps these ideas will run out, or their effectiveness will wane. More likely though, this package is just getting started. It sprung several leaks in the stout Bills and Steelers defenses. Imagine what it might do against the Dolphins, Bengals and Cardinals down the stretch.

2. Another litmus test for Patriots’ D

Can Dallas revive its run game at New England? There hasn’t been a smoking gun for the struggles the past two weeks (125 yards on 46 carries, 2.7-yard average), but the Cowboys have been particularly poor running from heavy personnel (20 carries for 34 yards, 1.7-yard average).

The answer could be to spread out in 11 personnel, producing space for Ezekiel Elliott rather than relying on tight ends and fullbacks to win blocks. Coordinator Kellen Moore has a host of RPOs in his bag that can leverage numbers in the offense’s favor, with Dak Prescott’s ability to run being another key factor.

In protection, the Cowboys’ linemen should be able to handle the Patriots’ rushers individually, but that’s only part of the battle against Bill Belichick. The group also must be sharp mentally against the Patriots’ litany of stunts and blitzes.


If Prescott has protection — as he has most of the year — the downfield duels should be fascinating. Amari Cooper might be Stephon Gilmore’s toughest test yet, while Michael Gallup and Randall Cobb are tougher covers than most teams’ second and third receivers.

Shanahan and Packers defensive coordinator Mike Pettine threw schematic haymakers at each other, with the Niners winning more battles despite a spotty night from quarterback C.J. Beathard. Shanahan now has a sharper triggerman in Jimmy Garoppolo, whose snappy release has been critical for late-in-the-down playmaking.

Pettine’s personnel decisions will be tested again Sunday night. He largely prefers nickel, dime and even dollar (seven DBs) packages, but the 49ers live primarily in base personnel.

B.J. Goodson has been Martinez’s partner in base personnel this season, impressing as a thumper. Pettine has also worked safety Ibraheim Campbell in as a linebacker in “big” nickel or dime packages. Both will be critical in slowing the 49ers’ expansive run game. Pettine may also lean on “Bear” fronts (three D-linemen covering guards and center), as he did late in last year’s meeting.


The aerial battle should look different. Pettine paired a slew of funky blitzes with Cover-2 looks last year, but he’s toned down the exotic calls this season. That’s likely because Preston Smith and especially Za’Darius Smith have been so disruptive, requiring fewer blitzes to get pressure.

The Philadelphia Eagles’ defense has stiffened with a healthy secondary, but its style is inherently susceptible to the Seattle Seahawks’ favorite downfield concepts.

Eagles coordinator Jim Schwartz’s Cover-3 is a far more aggressive than most. Rather than playing “deeper than the deepest” like a typical center fielder, free safety Rodney McLeod plays flat-footed and aggressive, reading the QB and jumping crossers. Philadelphia counts on its outside cornerbacks to “replace” McLeod in center field when they aren’t occupied by a route.


Schottenheimer will also stress the secondary’s discipline with moving pockets. More than any other team, the Seahawks love to roll Russell Wilson in one direction only to have him throw a route to the opposite side of the field. This ploy is often paired with a corner-post route, inviting the free safety to bite in the wrong direction.

The Los Angeles Rams’ defense has been quietly excellent since the arrival of Jalen Ramsey, with coordinator Wade Phillips favoring more man coverage of late.

One reason Phillips can play more man is because he has a top cover linebacker in Cory Littleton. A lanky speedster, Littleton is tied for second among all linebackers with eight pass breakups this season, and he’s proven equally adept covering running backs or tight ends.