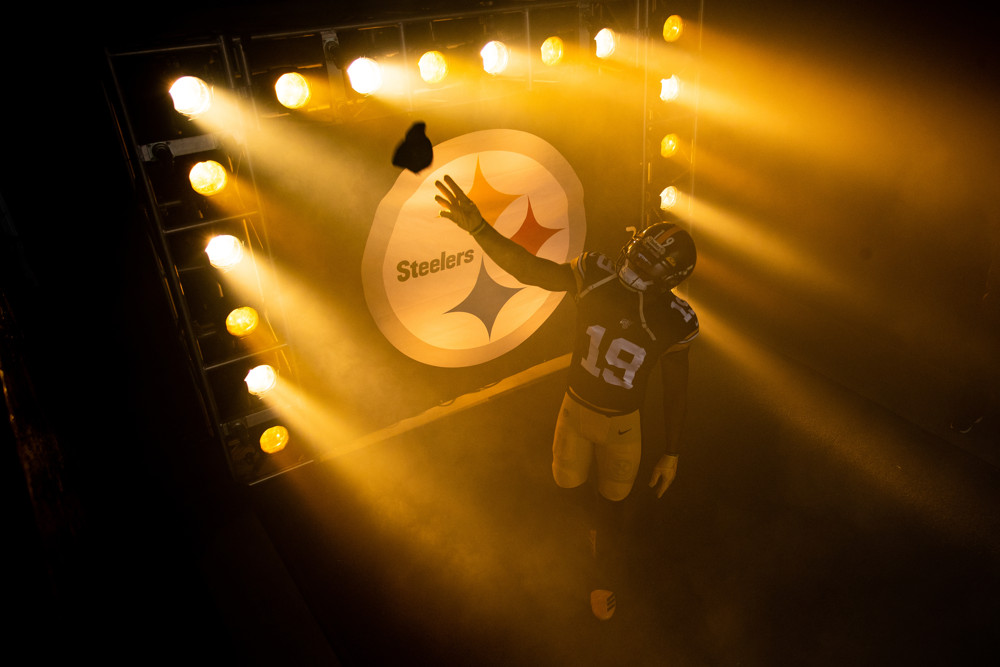 While their chances of winning the final AFC wild-card spot look pretty slim and most of Steeler Nation has reluctantly accepted what they believe will be the inevitable following this past Sunday’s debacle against the New York Jets, the Pittsburgh Steelers have been in a far more improbable spot of gaining a wild-card berth heading into a regular season’s final weekend.

In 1989 — a year the Steelers lost their first four games, including their first two contests by a combined 92-10 — Pittsburgh needed five or six things to happen on the regular season’s final Sunday in order to secure a seemingly improbable wild-card spot.

Worse yet, Pittsburgh lost virtually every two-way tiebreaking wild-card scenario, except when pitted against Miami.

Almost everyone, it seems, was still alive on that final weekend thirty years ago.

Like this year’s team, the Steelers were 8-7 and their only path to the playoffs, as unlikely as it sounded, was to beat Tampa Bay on the road while hoping that Houston (9-6) would lose at home to the Cleveland Browns (8-6-1) in a game that would ultimately decide the AFC Central Division title.

Chuck Noll’s team, which won five of their final six regular seasons games that year, also needed the New York Giants to defeat the Los Angeles Raiders, Indianapolis (8-7) to lose at New Orleans and for Cincinnati (8-7) to lose at Minnesota, where the Vikings only chance of making the NFC playoffs was to defeat the Bengals or hope that Green Bay lost at Dallas.


Despite depending heavily on others, the surging Steelers, who had been given up for dead earlier in the season, remained confident that they would be playing in the postseason despite such a dismal start.  “I think we have a team that belongs in the playoffs,” said Noll.  “You have to earn your way in.”

With, of course, a little help from friends, he might have added.

Buffalo, which was tied for first place with Miami and Indianapolis in the AFC East, but held all of the division tiebreakers, was fighting for a division title that weekend.  Marv Levy’s Bills, who were expected to beat the Jets, especially since quarterback Ken O’Brien was injured, were also in the wild-card hunt in the event they didn’t win their division, but needed something of a mini-miracle in order for the latter to happen — a scenario that required Cincinnati, Indianapolis, Kansas City, the Los Angeles Raiders, Pittsburgh and Seattle to all lose on the final weekend.

The L.A. Raiders were also very much in contention for a wild-card spot.  The Raiders (8-7) were playing the New York Giants, who had already clinched the NFC East, and needed to win along with losses by both Indianapolis and Cleveland.  “Now, it’s a must win,” said head coach Art Shell.  “We’ve got to win, then we’ll have to get help from Houston and New Orleans.  “Then, we’re in.”

Kansas City, whose wild-card chances were seriously damaged in a 20-13 loss to the Chargers the previous week, was also still tenuously in the AFC wild-card hunt.  The Chiefs (7-7-1) had to beat Miami — another team still in contention — and needed quite a few things to happen to earn a playoff spot.  In addition to beating Miami, they had to hope that the Bengals, Browns and Steelers all lost while Buffalo and Indianapolis were victorious.


Making things even more convoluted, the Dolphins, who were still fighting for a division title that final weekend, could still earn a wild-card spot if they didn’t win the AFC East by beating Kansas City coupled with losses by Cleveland, Indianapolis and Pittsburgh.

Even Seattle, then an AFC squad, was still mathematically alive, but the Steve Largent-led Seahawks would have had to beat the Redskins and — completely dependent on others while hanging on by the barest of threads — had to hope that Buffalo, Cincinnati, Kansas City, Oakland and Pittsburgh all went down to defeat.

Needless to say, there was a lot at stake for AFC clubs that final weekend — a year when four of the NFL’s six divisions remained unsettled until Christmas night.

Five of those teams fighting for a playoff spot — Buffalo, Cincinnati, Cleveland, Houston and Indianapolis — had a much easier path than the Steelers.  In fact, four of them controlled their own destiny and didn’t need help from anybody.

Buffalo, for instance, merely needed to defeat the Jets to capture the AFC East crown, which they ultimately did, trouncing New York 37-0.

Houston, however, could still make the playoffs with a loss to the Browns if any of three teams — Buffalo, Cincinnati or Indianapolis — also went down to defeat on that final Sunday.  To complicate things a tad more, the Browns, too, could still have made the postseason even if they lost to Houston, provided the Bengals, Chiefs, Colts, Raiders and Steelers also came up on the short end.

Like Buffalo, Cleveland and Houston, the Colts also controlled their own destiny and merely needed to defeat the Saints and they would be in.

Cincinnati, on the other hand, needed a little help — much less, however, than what the Steelers needed that almost unbelievable and magical weekend.  The Bengals were in as a wild-card as long as they upended the Vikings and either Pittsburgh won or Houston lost — both of which happened.

The same thing was true of the Raiders, who needed to defeat the New York Giants while hoping for losses by Cleveland and Indianapolis.

Much like this year’s injury-plagued team, the Steelers relied heavily on their defense that year — a unit that held their previous five opponents to 64 points, or 12.8 points per game, heading into Tampa Bay — in making their seemingly improbable playoff run.

Their offense, much like this year’s team, left a lot to be desired as Pittsburgh was outgained in total yardage in eleven of their previous twelve games yet the Steelers somehow found a way to win seven of those contests.


Hoping to return to the playoffs for the first time in five years, wide receiver Louis Lipps caught a pair of touchdown passes, including a 79-yard strike, and Rod Woodson set up ten points for Pittsburgh with a game-opening 72-yard kickoff return and a second-quarter interception that he ran back 39 yards to the Tampa Bay 18-yard line as the Steelers defeated the Bucs 31-22 before a crowd of 29,490 braving uncharacteristic 39 degree Florida weather to keep their flickering playoff hopes alive.

Lipps had four receptions for 137 yards in the game — his fifth 100-yard game of the season.

Pittsburgh’s victory automatically eliminated Kansas City from the wild-card race.  Seattle had been eliminated a day earlier in a 29-0 loss to the Redskins.

“It’s been an uphill battle for us all year,” said Coach Noll.  “At the end of the year, you can always look back and wish for a better record, but I’m happy with how these guys finished.

“These guys have done all they can do,” he added.  “Now we just sit back and wait.”

It was worth the wait as everything else magically fell in place.  Everything that had to occur happened in rapid succession that weekend as Cleveland clinched the AFC Central race with a 24-20 win over Houston on a short touchdown run by fullback Kevin Mack, capping a game-winning 58-yard drive, with 39 seconds remaining.  Mack had been activated only three weeks earlier after missing most of the season due to a drug conviction and an injured knee.


The following day, quarterback John Fourcade, a career journeyman who had shattered Archie Manning’s career record at Ole Miss, completed 21 of 28 passes for 291 yards and a pair of touchdowns as the Saints — playing for sheer pride — clobbered the Colts 41-6, eliminating Indianapolis from the playoff picture.  Incredibly, Fourcade had never started an NFL regular-season game until three weeks earlier.

Breaking a halftime deadlock, the New York Giants also came through for the Steelers, dashing the Raiders’ wild-card hopes with a convincing 34-17 win in East Rutherford, N.J.

It wasn’t until Monday — Christmas night — however, that the Steelers, who had been described as a “laughingstock” two weeks into the season, clinched a wild-card spot when the Vikings, fighting for the NFC Central title and a playoff spot themselves, defeated the Bengals 29-21.

Houston, which more or less backed into the playoffs after losing their final two regular season games, had already clinched the AFC’s other wild-card spot by virtue of Indianapolis’ loss to New Orleans on Sunday.


This year’s injury-riddled Steelers, who remarkably won seven out of eight and eight out of ten before stumbling against the Bills and the Jets down the stretch, were never expected to be in the playoff conversation at this juncture after starting 1-4 and losing Ben Roethlisberger to a season-ending elbow injury not even two weeks into the season.

The fact that they are in contention and need just two things to happen on Sunday — a win over the rival Ravens in Baltimore and a Houston victory over the Titans — is remarkable in and of itself.

Neither outcome is likely, of course, but stranger things have happened.  The gold-and-black, after all, have faced much more difficult paths to the playoffs in the past.