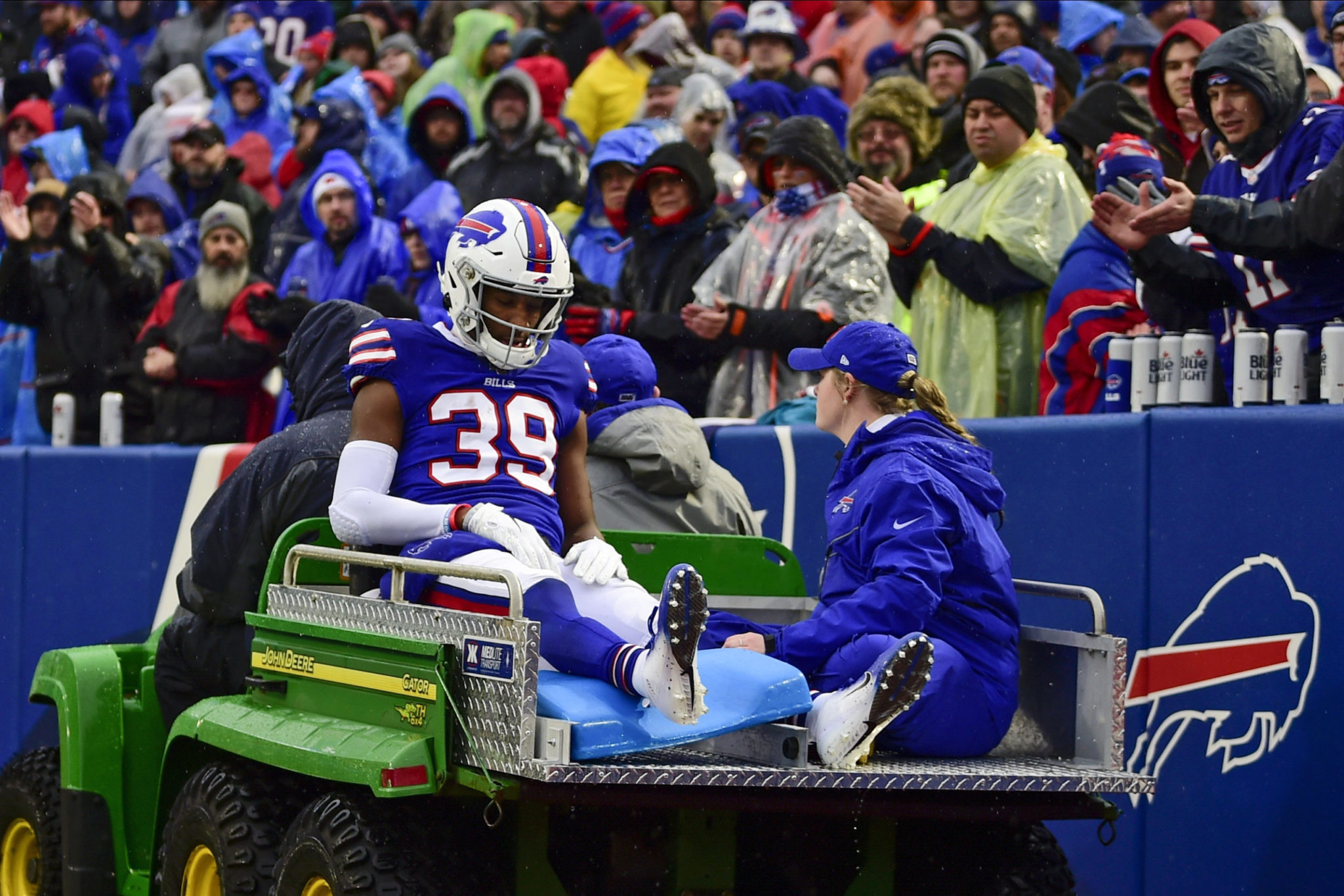 The Kansas City Chiefs will hope for good news about their depleted secondary during their first-round playoff bye week.

Safety Juan Thornhill suffered a knee injury in Kansas City’s victory Sunday over the Los Angeles Chargers, which coupled with New England’s loss to Miami gave the Chiefs the No. 2 seed in the AFC playoffs. Thornhill’s injury appeared serious — he needed the help of two trainers to limp off the field, never putting any weight on his knee.

The Chiefs already were missing cornerback Morris Claiborne to a shoulder injury, and cornerback Bashaud Breeland left the game with an illness.

For the Chargers, defensive back Desmond King left in the first half with an ankle injury.

Other playoff-bound teams were also unable to avoid injuries in their regular-season finales.

The Eagles were already decimated by injuries and saw more players leave the field in their win over the New York Giants, which secured the NFC East title for Philadelphia.


The Eagles lost running back Miles Sanders to an ankle injury and three-time Pro Bowl right guard Brandon Brooks to a shoulder injury in the first half. Brooks had to be carted off the field. Philadelphia cornerback Avonte Maddox also left with an undisclosed injury.

The Giants had a late major injury when center Jon Halapio hurt his left leg. He was carted off. Coach Pat Shurmur said the early diagnosis is a torn Achilles tendon.

Halapio missed most of last season after breaking his right ankle and injuring his lower right leg in September. Also, Giants running back Eli Penny left with a back injury in the first half.

Starting Bills cornerback Levi Wallace was carted off with a right ankle injury in Buffalo’s loss to the New York Jets. He was hurt when his cleat got caught in the turf as he intercepted Sam Darnold’s pass, which caromed off the back of teammate Taron Johnson’s helmet.

Buffalo was so depleted at cornerback that receiver Isaiah McKenzie saw a few snaps on defense in the fourth quarter.

Bills right tackle Ty Nsekhe was also carted off the sideline after hurting his ankle on the opening drive of the third quarter. Nsekhe had just returned to the lineup after missing five games with an ankle injury.

The Bills are the No. 5 seed in the AFC playoffs and will play at AFC South champion Houston next week.

The Minnesota Vikings were locked into the No. 6 seed in the NFC but still lost defensive tackle Armon Watts and offensive tackle Rashod Hill to left leg injuries in their loss to the Chicago Bears.


For Chicago, Pro Bowl kickoff returner Cordarrelle Patterson entered the concussion protocol after taking a pair of end-around runs as a wide receiver in the first quarter. Anthony Miller replaced him on kickoff returns and hurt his shoulder on his first attempt. Tarik Cohen took over after that.

The Green Bay Packers had three players get hurt as they secured a first-round playoff bye with a victory over the Detroit Lions. They were: center Corey Linsley (back), right tackle Bryan Bulaga (concussion) and linebacker B.J. Goodson (neck).

For Detroit, wide receiver Kenny Golladay didn’t return after being evaluated for a concussion following a 42-yard catch in the second quarter. Linebacker Devon Kennard and tight end Isaac Nauta each left with hamstring injuries.

The AFC South champion Houston Texans rested quarterback Deshaun Watson and several other starters against the Tennessee Titans, who won to earn a playoff spot in a game that meant nothing to Houston. Texans cornerback Johnathan Joseph left in the first half after injuring a hamstring, but said after the game he’s OK and expects to play when Houston hosts Buffalo next weekend.

Playoff-bound teams that did not report any new injuries Sunday were the New Orleans Saints, the New England Patriots and the AFC’s top seed, the Baltimore Ravens, who rested numerous starters including quarterback Lamar Jackson.

Dolphins safety Walt Aikens left in the fourth quarter of Miami’s win over New England with an ankle injury.

Panthers rookie quarterback Will Grier left Carolina’s loss to New Orleans in the second quarter with a foot injury, finishing his second NFL start with a 0.0 quarterback rating on 1 of 8 passing for 4 yards. He was replaced by Kyle Allen. The Panthers provided no update on the extent of the injury after the game.

In the Cincinnati Bengals’ win over the Cleveland Browns, Bengals cornerback William Jackson III was sidelined with a shoulder injury.

The Rams’ Cory Littleton suffered a chest injury in the third quarter of Los Angeles’ win over Arizona, ending his standout season a bit early. Rams defensive lineman Michael Brockers then had to be helped off the field to a cart, unable to put weight on his left leg.

Washington Redskins defensive back Maurice Smith was ruled out of their loss to the Dallas Cowboys with a concussion after being taken off the field on a cart in the first quarter.