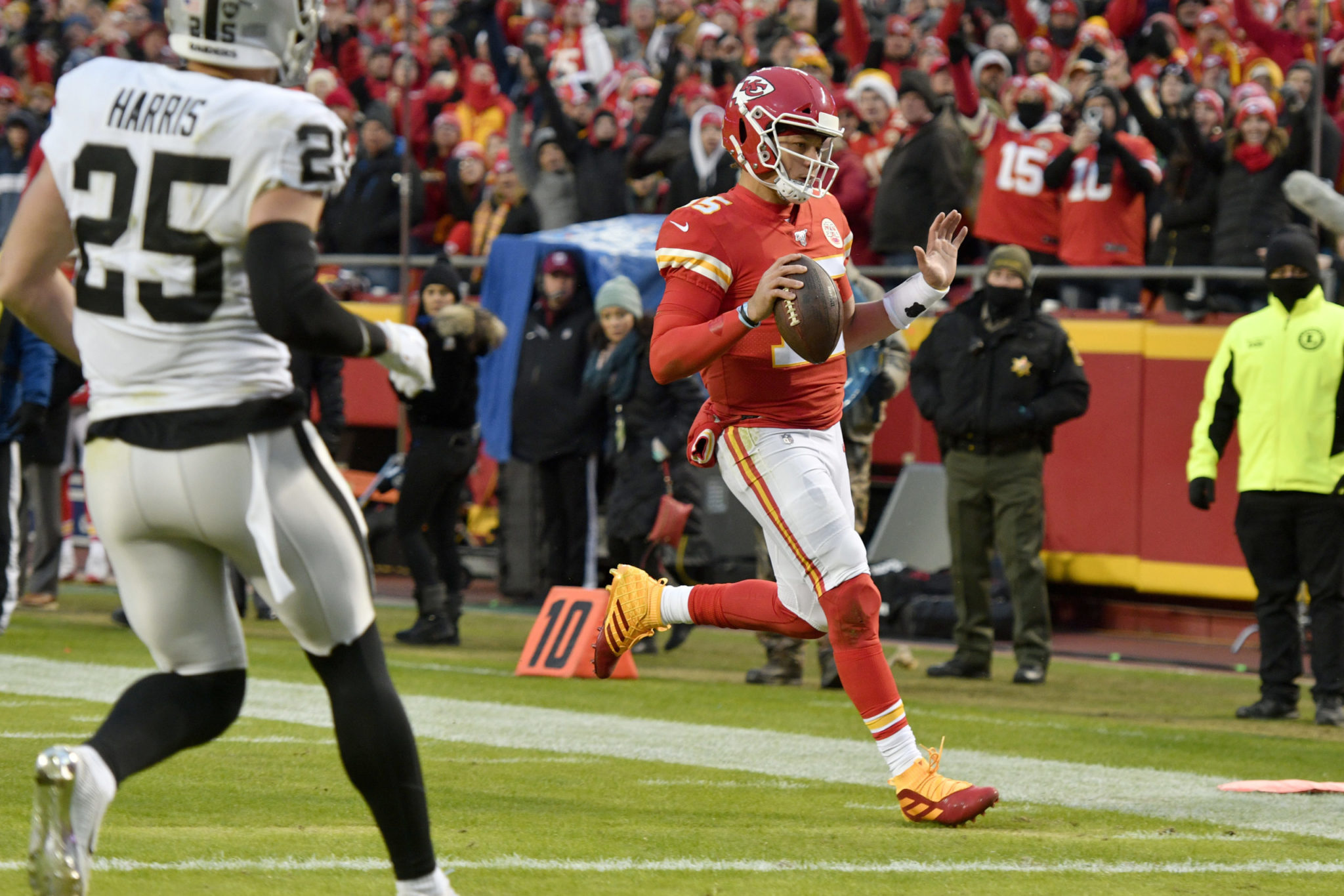 Patrick Mahomes looked up at the scoreboard late in the third quarter and was stunned to see the Kansas City Chiefs had taken a 31-0 lead over the AFC West rival Oakland Raiders.

“I felt like we’d only scored a couple of times,” he said.

That’s because the Chiefs’ high-powered offense didn’t need to do a whole lot Sunday.

Their defense and the inept Raiders took care of the rest.


Mahomes did throw for a touchdown and run for a touchdown, but it was Juan Thornhill’s pick-6 and a long list of blunders by Derek Carr and Co. that really made the difference.

They allowed Kansas City to cruise to a 40-9 victory and into a two-game lead over the Raiders in the division race.

“That’s what we expected all season long, and you’ve seen it week by week the defense getting better,” Mahomes said, “and the offense just played in the flow of the game. We’ve been in every type of game so far and we’ve been finding ways to win them.”

LeSean McCoy and Darwin Thompson also had TD runs for the Chiefs (8-4), who can clinch a fourth straight division title with a win over New England and an Oakland loss to Tennessee next weekend.


Oakland (6-6) sure didn’t play like a team fighting for a piece of the division lead.

Carr dropped to 0-6 at Arrowhead Stadium with another miserable outing, throwing for 222 yards with a touchdown and two interceptions. The Raiders failed to score twice in the red zone, were penalized 12 times for 99 yards, and watched Kansas City put together a 9½-minute drive almost entirely on the ground that soaked up most of the fourth quarter.

When the Raiders finally scored a touchdown in the last minute, the Chiefs blocked the extra point and returned it for two points — one more insult to Oakland in a game full of them.

It was the Raiders’ seventh straight loss in Kansas City, and the continuation of a major late-season spiral. The blowout came on the heels of a 34-3 loss to the Jets last weekend.

“We put ourselves in horrible situations,” Raiders coach Jon Gruden said. “We had turnovers in the kicking game, I think four (offside), a pick-6 and we just never found our rhythm at all.”


Meanwhile, the Chiefs were not penalized once in a game for the first time since Dec. 8, 1974.

“Do that and be productive in the red zone,” Chiefs coach Andy Reid said, “good things happen.”

Both teams struggled to move the ball at times with frosty winds whipping at 40 mph out of the west. Flurries even fell during halftime, adding to the misery for fans huddled in the stands.

As if those dressed in silver and black weren’t depressed enough.

In the first half alone, Carr threw both of his interceptions. The Raiders lost a fumble on a kick return; failed to convert on fourth-and-1; committed seven penalties; and watched Daniel Carlson yank a 44-yard field-goal attempt about 20 yards wide left.

The Chiefs took advantage of all the squandered opportunities.

Mahomes, who perhaps more than anyone benefited from a week off, capped a 47-yard drive in the first quarter with a short TD pass to Darrel Williams. Then, late in the first half, the reigning MVP scrambled to his left and ran untouched 13 yards for another touchdown.

The Chiefs put the game out of reach in the third quarter.

First, they moved swiftly downfield on the opening possession before Harrison Butker drilled a 50-yard field goal into the wind. Then, on their next possession, Mahomes threw a pick in the end zone that was overturned when replay showed wide receiver Demarcus Robinson was held on the play.


The penalty gave Kansas City the ball back and McCoy scored moments later.

Oakland finally ended the Chiefs’ streak of 59 straight points against them when Carlson hit a chip-shot field goal in the fourth quarter. The streak dated to their Week 2 matchup and was a record for a 122-game series that traces its roots to the earliest days of the AFL.

It also ended the Raiders’ streak of 15 drives against Kansas City without a point.

“Every team that makes the playoffs, it’s about what their defense can do. I think this week we were able to refocus,” Chiefs safety Tyrann Mathieu said. “Our coaches did a good job of challenging us. Coming off the bye week, we knew what we needed to work on. I’m just proud of our guys. We haven’t played well at home. This type of performance against a division team is pretty good.”

REID ALL ABOUT IT

Oakland: begins a two-game homestand against the Titans on Sunday.

Kansas City: visits the Patriots in an AFC title game rematch on Sunday.