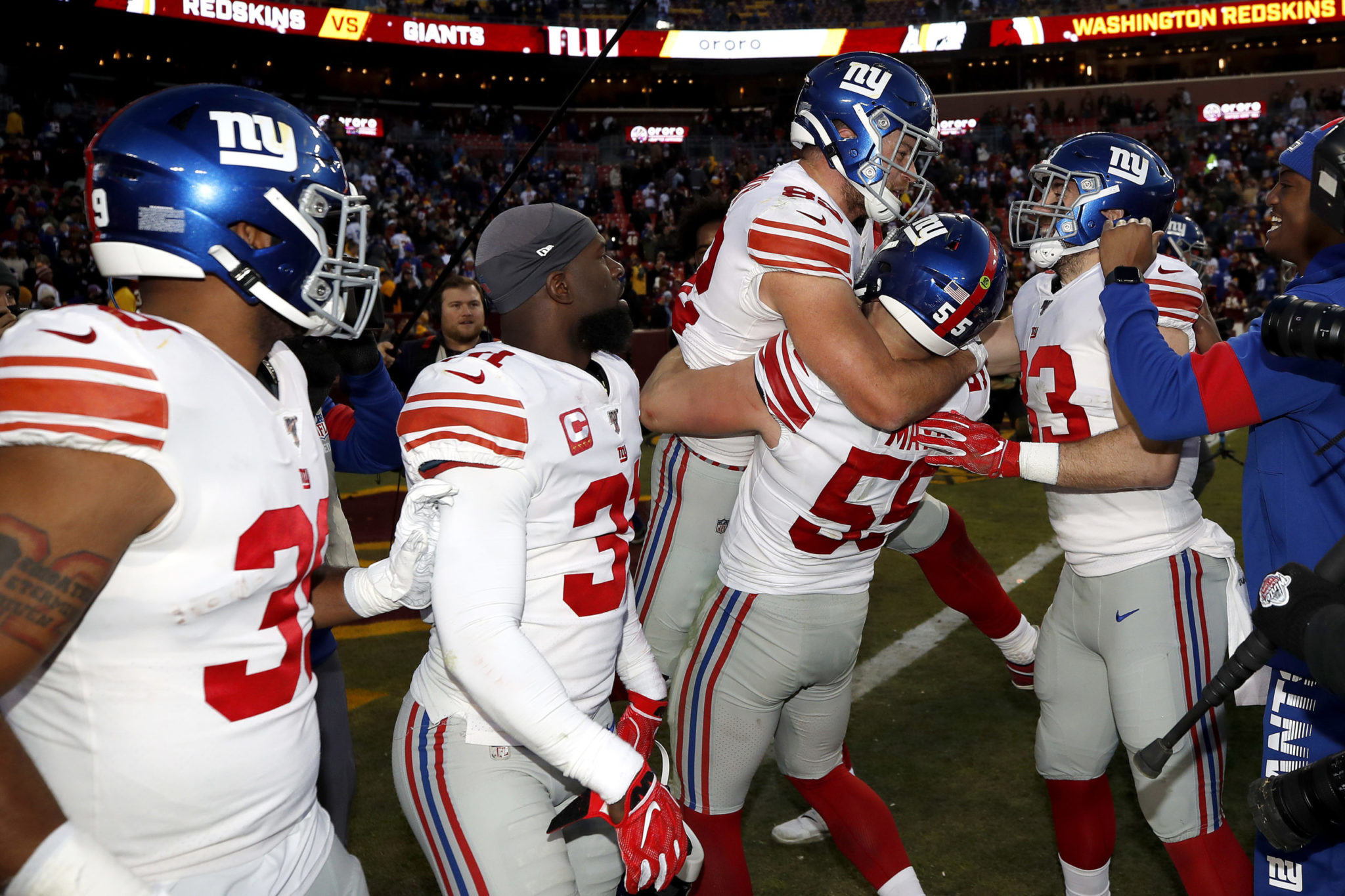 Pat Shurmur mused about scolding Daniel Jones for a fumble, then the New York Giants coach looked down at the score sheet.

“Five touchdowns and certainly the touchdown in overtime,” Shurmur said. “Maybe I won’t holler at him. I’ll just talk to him.”

Jones put together one of the best performances by a rookie quarterback in decades Sunday, throwing for 352 yards and a career-high five touchdown passes to help the Giants beat the Washington Redskins 41-35 in overtime. He joined Matthew Stafford as the only rookie QBs since 1950 to throw for 300-plus yards and five-plus TDs in a game.

The sixth overall pick said he didn’t look at his stat line. Ending a personal eight-game skid with a 3-yard TD pass to Kaden Smith with 4:15 in overtime spoke for itself.

Jones was 28 of 42 in his first action since missing the past two games with a sprained right ankle. He also connected on scores with Sterling Shepard, Saquon Barkley and Cody Latimer.

Barkley was the perfect complement for Jones and tormented a Redskins secondary missing several regulars. He was responsible for 279 total yards: 189 rushing and 90 receiving and a score each way.

“I think that’s kind of what they envisioned when they drafted D.J. and drafted me,” Barkley said. “I think we both have the potential and the talent to play well together and open stuff up for each other.”

The trio of Jones, Barkley and Shepard showed further evidence that whoever is running the Giants (4-11) next season has talented building blocks to work with on offense, along with a high draft pick. Shurmur and general manager Dave Gettleman’s jobs are in jeopardy, though the embattled coach downplayed winning as a way to prove to ownership he deserves to stay.

“Getting a win is important for all of us,” Shurmur said. “We’re not doing it for those reasons. We’re doing it because it’s what we do. How anybody evaluates that, that’s out of our control.”

The Redskins (3-12) moved into the driver’s seat for the No. 2 pick. If the Cincinnati Bengals, who clinched the top pick with their overtime loss at Miami, opt for Heisman Trophy-winning quarterback Joe Burrow, it would give Washington the first opportunity to select Ohio State pass rusher Chase Young.


The Chase Young Bowl was a showcase of prolific playmaking and bad defense. Barkley ran for 108 yards on his first four carries, while Redskins quarterback Dwayne Haskins was 12 of 15 for 133 yards and two TD passes before injuring his left ankle on the first play of the second half.

Redskins head physician Dr. Robin West said she did not clear Haskins to return. Haskins said owner Dan Snyder encouraged him to listen to medical advice and not go back in the game.

Veteran Case Keenum relieved Haskins and threw his first passes since Oct. 24, when he was concussed at Minnesota. He was 16 of 22 for 158 yards and rushed for the tying score with 29 seconds left in the fourth to cap off a 99-yard drive.

Jones led the Giants on an 11-play, 66-yard drive in overtime to salvage the victory.

“You see it as a huge opportunity, and you’re excited for that,” Jones said of OT. “That’s kind of what you look forward to, what you play for is an opportunity to do that — to go down and win the game.”

Barkley came into the day with just one run of 40-plus yards this season. He busted out a 32-yard run on New York’s first possession and turned Redskins safety Montae Nicholson inside out during a 67-yard TD on his fourth carry.

He also had the game’s longest reception at 51 yards.

“That guy’s hard to bring down,” Redskins running back Adrian Peterson said. “He’s a bull out there.”

When Haskins injured his right ankle earlier this month at Green Bay, the 15th overall pick insisted he wasn’t coming out. He wasn’t afforded the opportunity to show the same toughness Sunday after a sack by Giants linebacker Markus Golden had him hobbling off the field favoring his left ankle before being carted off.

When he scored early in the fourth quarter, Peterson recorded his 111th career rushing touchdown. That broke a tie with Walter Payton and put Peterson in sole possession of fourth on the NFL’s career list.

Giants: RT Mike Remmers left in the first half with a concussion. … Shurmur said LB Alec Ogletree woke up with a sore back and was only going to play in the case of emergency.

Redskins: McLaurin was injured while making a catch with 47 seconds left in the fourth quarter. He was evaluated for head and shoulder injuries. … Lost RT Morgan Moses to a knee injury in the third quarter shortly after Haskins was knocked out of the game. … S Montae Nicholson injured his neck in overtime. … Played without cornerbacks Quinton Dunbar and Fabian Moreau, who were out with hamstring injuries.

Giants: Host the Philadelphia Eagles next Sunday in what could be Pat Shurmur’s last game as coach.