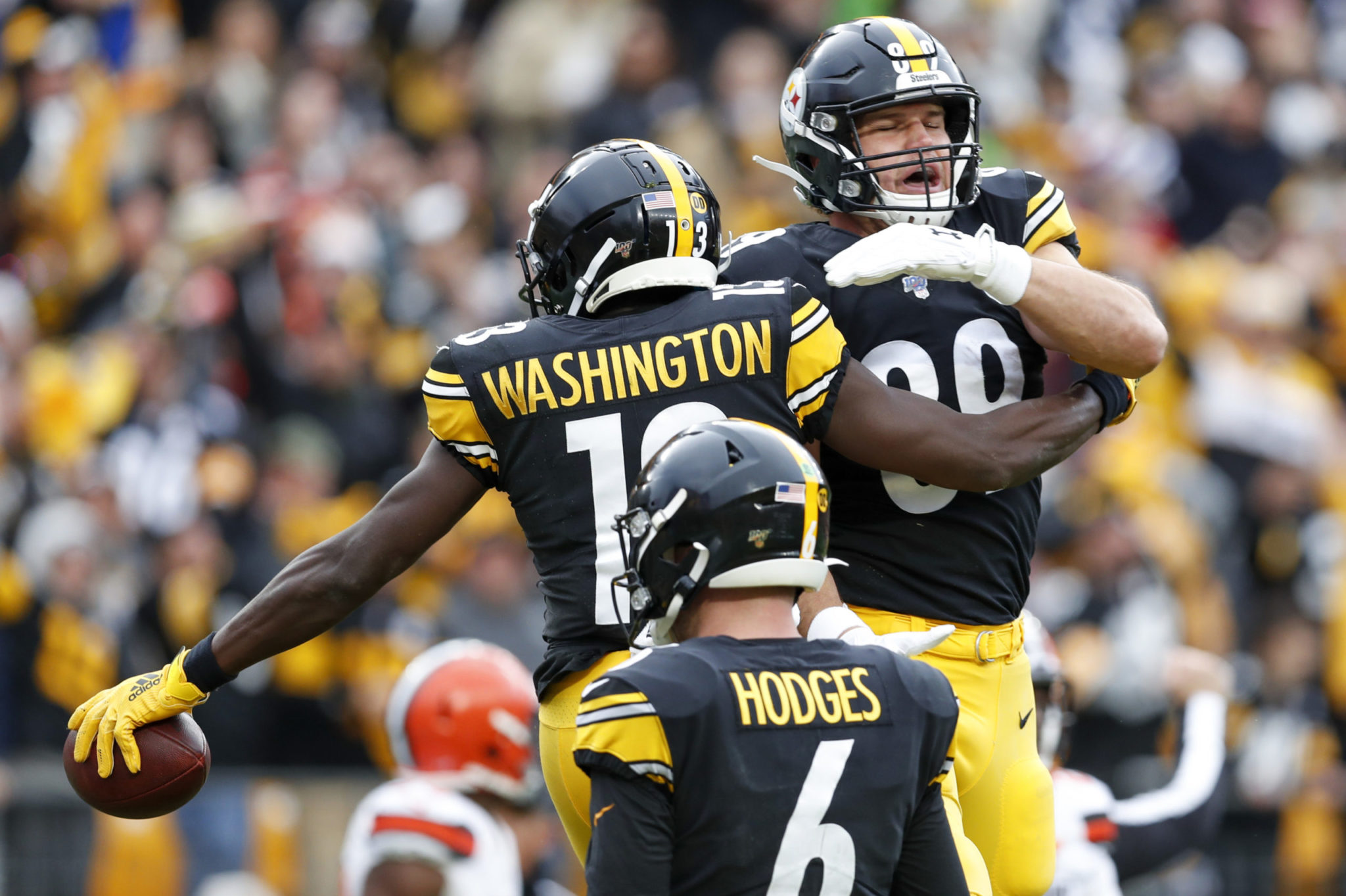 No fighting. No helmet swinging. Barely any trash talking.

The Pittsburgh Steelers and Cleveland Browns kept things civil in their highly anticipated rematch, which ended the way they always seem to end at Heinz Field: the Steelers walking off in triumph 20-13, leaving the Browns to ponder how another one got away.

Devlin “Duck” Hodges threw for 212 yards with a touchdown and an interception in his second career start. Rookie Benny Snell ran for 63 yards and his first NFL touchdown, and the banged-up Steelers exacted revenge for their whipping at the hands of the Browns two weeks ago with a 20-13 victory on Sunday.

Pittsburgh (7-5) boosted its postseason chances by rallying from 10 points down thanks in large part to Hodges, a rookie undrafted free agent who happens to be a champion duck caller in his down time. He was aided by the emergence of wide receiver James Washington, who caught four passes for 111 yards and a juggling 30-yard score late in the first half.


The Browns (5-7) saw their three-game winning streak come to a crashing halt when they failed to handle a Pittsburgh offense riddled with injuries and inexperience at the skill positions. Baker Mayfield completed 18 of 32 passes for 196 yards with a touchdown and an interception; he played the entire second half with his right hand in a protective glove after smacking it against the face mask of Pittsburgh linebacker Bud Dupree.

Nick Chubb ran for 58 yards and Kareem Hunt added 65 total yards and a touchdown reception. But Cleveland failed to pull even with the Steelers in the standings and sweep the season series from its rival for the first time in 31 years.

The teams’ first meeting on Nov. 14 ended with an ugly altercation between Cleveland defensive end Myles Garrett and Pittsburgh quarterback Mason Rudolph that ended with Garrett hitting Rudolph in the head with Rudolph’s helmet. The ensuing fallout — which included Garrett being suspended indefinitely; Rudolph fending off Garrett’s allegation that he used a racial slur shortly before things got out of hand; suspensions for Browns defensive end Larry Ogunjobi and Steelers center Maurkice Pouncey; and more than $700,000 in fines.

That reignited a rivalry that’s been dominated by the Steelers since Cleveland returned to the NFL a generation ago.

Just in case it needed a little more stoking, Browns rookie head coach Freddie Kitchens was spotted wearing a “Pittsburgh started it” T-shirt on Friday night. Several Steelers responded with some inauspicious wardrobe choices while waking into work on Sunday.

Pittsburgh’s response on the field was even more emphatic.


The Steelers spotted Cleveland the game’s first 10 points. The spark Hodges provided in relief of Rudolph in the second half last week against Cincinnati appeared to have evaporated thanks in large part to conservative play calling.

On Cleveland’s ensuing possession, Mayfield’s right hand hit Dupree’s facemask. He grabbed it in pain and jogged to the sideline, replaced by Garrett Gilbert. Though he returned to start the second half, he wasn’t the same. Neither were the Browns.

Browns: CB Greedy Williams left in the second half with a shoulder injury. CB Robert Jackson exited in the first quarter with an ankle injury and did not return.

Steelers: travel to Arizona next Sunday.