The man who has been the face of the New York Giants since 2004 is probably going to make his final appearance for them this weekend. 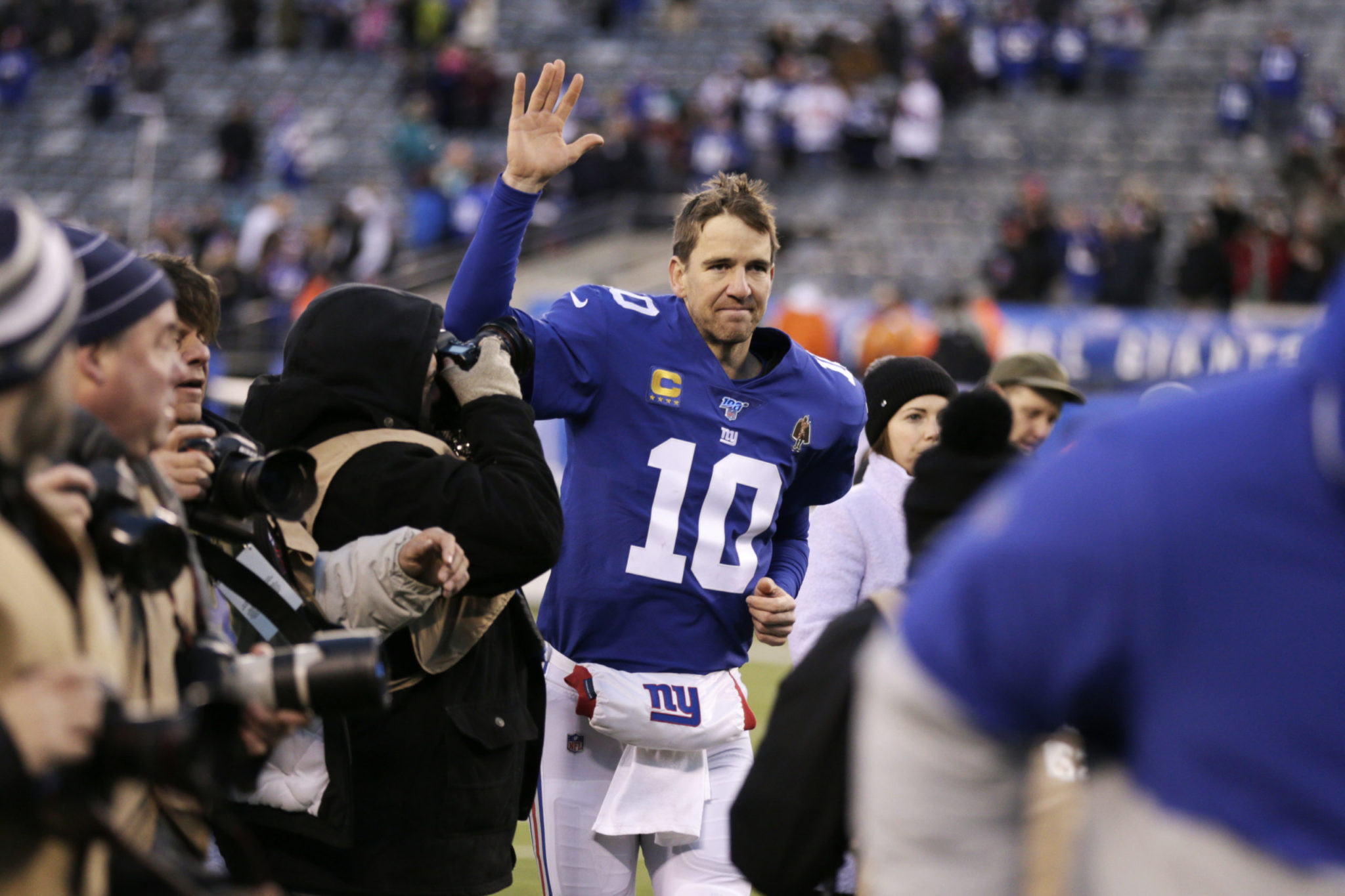 Eli Manning’s 16-year career with New York, in which he helped restore the Giants as a title force in the NFL and led them to two Super Bowl victories, likely will come to an end Sunday. The Giants will try to spoil the Philadelphia Eagles’ bid to win the NFC East.

If it is the end, Manning will leave with almost every Giants passing record; two NFL championships; two Super Bowl MVPs; a streak of 210 consecutive starts between 2004-17; a Walter Payton NFL Man of the Year Award; and the respect of his teammates.

No doubt the last eight years have been tough. New York has made the playoffs once since winning the championship for the 2011 season, and that’s taken a toll on his tenure and his prospects for selection to the Pro Football Hall of Fame.


That’s just the stuff on the surface. To his teammates, friends and coaches, Manning will always be the player’s player, a classy, giving guy, a family man and a football intellect who wanted nothing more than to help his teammates win games.

What’s little known is Manning the prankster, the quiet imp who found a way to get his teammates to laugh.

The pranks are legendary. The No. 1 overall draft pick in 2004 — by San Diego before a quick trade to the Giants — would borrow a teammate’s cell phone and change the language. He would put a dye in the socks of his offensive linemen that would turn their toes blue for weeks.

Former center Shaun O’Hara made the mistake of getting into a disagreement with his quarterback and found his car coated with petroleum jelly and baby powder. Try to get that off.

Make no mistake, Manning isn’t going out the way he would like. First-round pick Daniel Jones will be the starting quarterback Sunday in a game that may decide the division title.

Manning will be standing on the sideline watching, like he has most of the season. He lost his starting role after the second game, although he did write a heart-warming final chapter at home in leading the Giants to a 36-20 win over the Miami Dolphins two weeks ago.

Though disappointed, Manning never hesitated to help Jones, the No. 6 overall choice in the draft.


Veteran receiver Golden Tate III has been amazed by how Manning went out of his way to help the 22-year-old who took away his job.

“With everything that has gone on with him and D.J. he stayed consistent to who he is, still the witty, funny guy, jokester,” Tate said. “He has remained upbeat and we all noticed that and appreciated it. I can’t say I would’ve handled the situation the way he did, with the New York media and being that guy for so long until all the sudden it’s not.”

Manning, who earned $23.2 million in the final year of his contact, has not disclosed his future plans. It’s obvious he does not want to be a backup. With the right team and a good offensive line, he can still make plays.

“He is really special for a lot of the reasons that won’t ever go down on a stat sheet, in my opinion,” said offensive coordinator Mike Shula, who seemed on the verge of tears talking about Manning. “The kind of guy he is, the way he handles things, watching him how he is with you all, with his teammates, with coaches, handling the situation earlier this year. It’s just unbelievable. I’ll never forget it.”

Manning wasn’t shy about saying he did not want to be drafted by the Chargers in 2004. That opened the door for Giants general manager Ernie Accorsi to acquire the Ole Miss quarterback and younger brother of then-Indianapolis Colts star Peyton Manning. It gave the Giants a franchise quarterback for years and years, something they had not had since Phil Simms in the 1980s and early ’90s.

New coach Tom Coughlin waited nine games before benching future Hall of Famer Kurt Warner and making Manning his starter. As a rookie, Manning went 1-6 after taking over on a team that finished 6-10 after going 4-12 the year before. But it laid the groundwork for the Giants to win the NFC East the following season.

The Giants won their third Super Bowl in franchise history in 2007, when Manning hit Plaxico Burress on a 13-yard TD pass with 35 seconds remaining to knock off the previously undefeated New England Patriots 17-14. The touchdown was set up by David Tyree’s famous helmet catch after Manning eluded a rush.


The second title came in ’11 when Manning led another late drive to knock off Tom Brady and the Patriots again. Ahmad Bradshaw scored on a 6-yard run with 57 seconds to play to cap an 88-yard drive that was ignited by a 38-yard pass to Mario Manningham. He made an over-the-shoulder catch and barely stayed in bounds right in front of Bill Belichick.

Special teams coordinator Thomas McGaughey joined the Giants in 2007, left in 2010 and returned to the organization last year when Pat Shurmur was hired as coach. He said Manning was the same guy when he returned. He was first in the building each morning, eating breakfast around 6:15 a.m. and then doing whatever had to done while helping out where ever needed.

“He’s going to be definitely missed around here,” McGaughey said. “He’s a legend in his own right. I’ve got to thank him before he gets out of here for giving me a ring, because he did a heck of a job in that ’07 season. All of the memories and just being around E all of time, especially back then when I first got here. Just watching him grow as a quarterback, and now just to come back and to see him as the old man in the building, just the old grizzly veteran , who is a guy that just loves ball. He just loves ball.”

Jon Halapio remembers when he made the transition from guard to center in 2018 and Manning reached out to him.

“He helped me tremendously just from the mindset of what he is thinking and what he sees, helped me out mentally,” Halapio said. “Besides that he has been an awesome teammate and friend off the field. If this is his last one, it is going to be a sad day. “