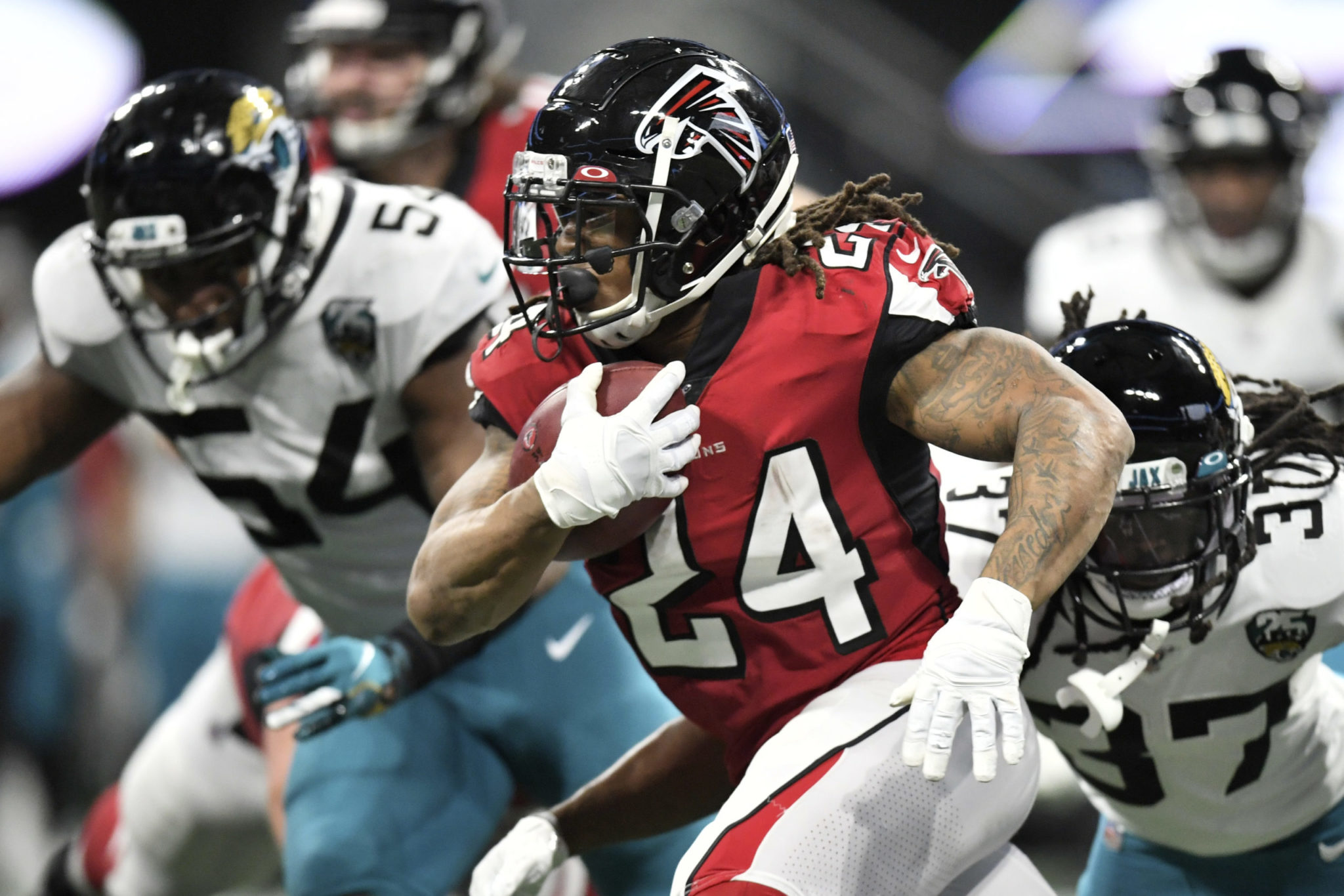 If this was Dan Quinn’s final game in Atlanta as the Falcons coach, at least he went out in style.

Devonta Freeman scored two touchdowns before Jacksonville took a snap, and that was enough to send the Falcons past the woeful Jaguars 24-12 Sunday in a match-up between teams long since eliminated from the NFL playoff race.

Matt Ryan threw for 384 yards and Julio Jones had his biggest game of the year, hauling in 10 catches for 166 yards.

Before thousands of empty seats at Mercedes-Benz Stadium, the Falcons (6-9) won their third straight game while holding the Jaguars (5-10) to 288 yards in the home finale.

“We wanted to close out our season at home for our fans and certainly represent the way we could,” Quinn said.

Quinn’s future has been the subject of feverish speculation in Atlanta. In a season of high expectations, the Falcons got off to a 1-7 start and are headed to the second straight losing record.

The only solace for Quinn is another strong finish. In 2018, the Falcons closed with three straight wins. Now, they’ve got another three-game run that is largely meaningless in the grand scheme of the season.

It may not be enough to save Quinn’s job after five years as the Falcons coach, even though he guided the franchise to only its second Super Bowl appearance during the 2016 season.

“It’s been a tale of two halves,” Ryan said. “The first half (of the season) is not what we wanted. But in this league, the margin of error is small. The difference between being in the mix with a handful games going different in the first half is not much. But you have to be on right side of it.”

Jacksonville came out flat in its first game since the firing of top executive Tom Coughlin, who was let go on Wednesday after several questionable roster moves and a scathing critique from the players’ union over his draconian disciplinary methods.

Coach Doug Marrone is also on the hot seat.

The Jaguars have lost six of their last seven games and 20 of 27 since a 3-1 start to the 2018 season, which came on the heels of a surprising run to the AFC championship game.

The Falcons took the opening kickoff and drove 82 yards in six plays, capped by Freeman’s 17-yard touchdown run. He took a quick flip from Ryan and scampered to the end zone without being touched.

On the ensuing kickoff, Michael Walker was stripped of the ball by Keith Smith. Brian Hill fell on the fumble at the Jaguars 25, sending Atlanta’s offense back on the field with barely enough time to catch its breath.

Four plays later, Ryan hooked up with Freeman out of the backfield on an 8-yard scoring pass.

Even with Ryan being picked off twice, Jacksonville couldn’t muster much of an offensive threat behind Minshew, who was 13 of 31 for 181 yards.

Quadree Ollison tacked on a 3-yard touchdown run early in the fourth quarter to stretch Atlanta’s lead to 24-6.

It also was his 55th 100-yard receiving game, leaving him just two behind Marvin Harrison on the career list in that category.

“There’s no better teammate,” Ryan said. “He’s one of the best to ever do it in this sport.”

Beasley had just 1.5 sacks through the first eight games, but he now has 6.5 in the last seven.

He had one of three Atlanta sacks against Minshew, with Pro Bowl selection Grady Jarrett also getting one.

“His use of hands has certainly improved,” Quinn said of Beasley. “Those are the kind of plays we need him to make. He and Grady were especially active today.”

Hill and Ryan Allen kept Jacksonville in a hole much of the game.

Hill downed one of Allen’s punts at the Jaguars 1, and another at the 2.

“That’s a big deal,” Quinn said. “That’s one of Ryan’s strengths. He’s able to place the ball down there inside the 10. We knew field position against this team would be critical.”

Falcons safety Ricardo Allen was shaken up late in the game, but no serious injuries were reported..

Jaguars: Close the season at home against the AFC South rival Colts (7-8), looking to avenge a 33-13 loss at Indianapolis in the teams’ first meeting.