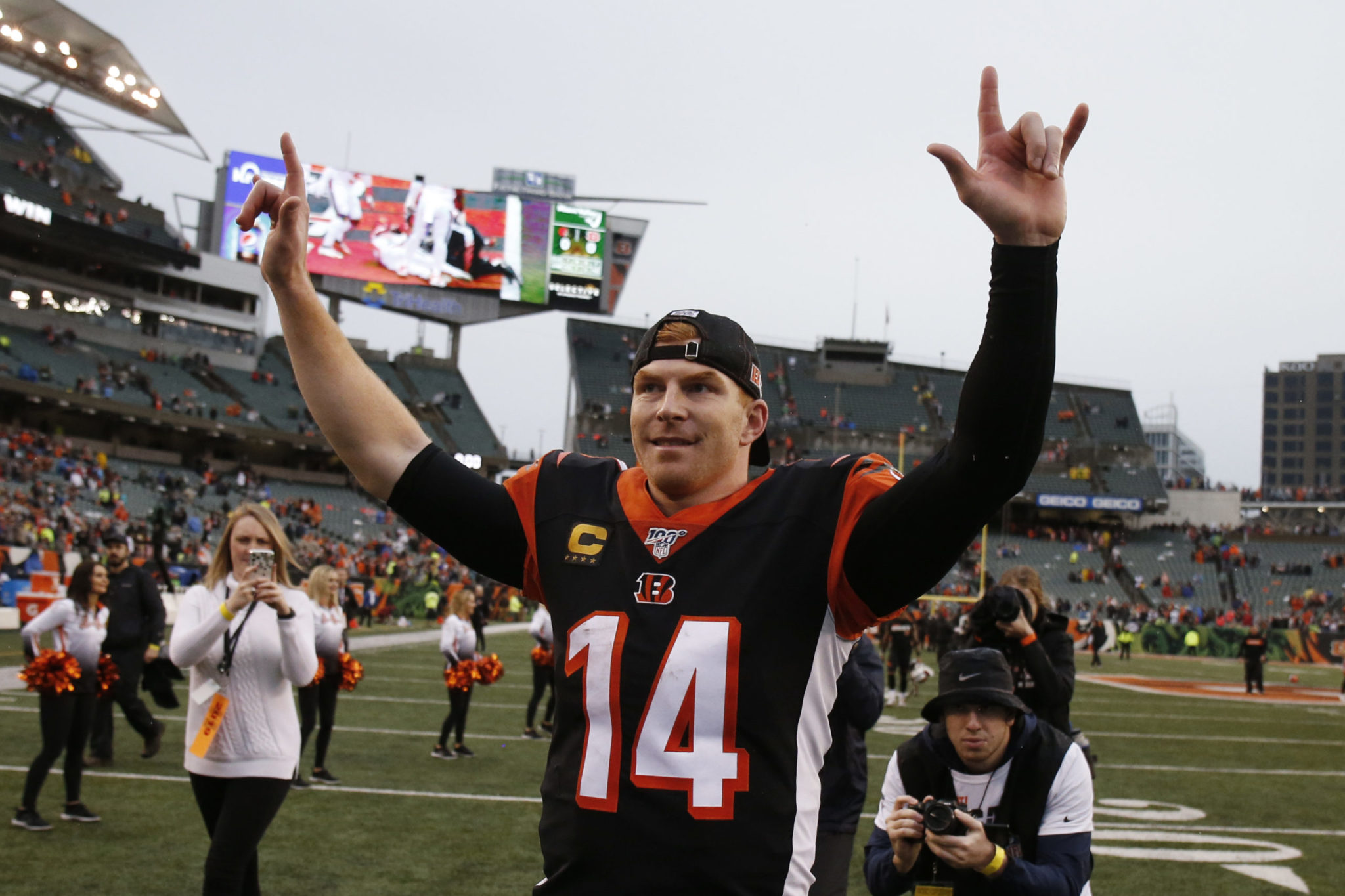 Andy Dalton took the snap and went to his knee, finishing a double-digit victory that might suffice as his farewell to Cincinnati.

On the Browns sideline, Freddie Kitchens hugged Baker Mayfield at the end of a season so disappointing the neither one knows if the head coach will get another chance.

From the top of Ohio to the bottom, it was misery squared on a gray, rainy afternoon. And now, it’s time to figure out who’s going to be around for the next try to get it right.

Dalton threw for a touchdown and ran for another Sunday in his farewell as Cincinnati’s franchise quarterback. A Joe Burrow banner in the upper deck reminded him what comes next as the Bengals wrapped up one of their most miserable seasons with a 33-23 victory.

Dalton wants to start somewhere next year, so this might have been his finale in tiger stripes.


“If that’s the case, it was good to end it taking a knee,” the ninth-year veteran said.

The Bengals (2-14) matched the worst record in their 52-year history. They’ll pick first in the draft for the first time since 2003, when they also were coming off a 2-14 finish and chose franchise quarterback Carson Palmer.

They ended a streak of 10 straight losses to AFC North opponents with Dalton leading the way.

“A true leader,” said first-year coach Zac Taylor, who benched Dalton for three games at midseason. “He’s kept us afloat. You need your quarterback to lead by example.”

Cleveland (6-10) was a chic Super Bowl pick with Mayfield coming off a sensational rookie season and Odell Beckham Jr. adding star quality to the offense. Instead, the Browns significantly regressed under their first-year head coach, raising questions about whether Kitchens will get a second chance.

“I haven’t been told anything different,” Kitchens said. “They expect me to do my job, and I’m going to show up tomorrow and do my job. They have not given me any indication of anything else.”

The intrastate rivals moved on with an uneven game that epitomized their seasons.

Dalton knew it was likely his final start for the Bengals after nine seasons without a playoff victory. A day earlier, Burrow threw seven touchdown passes in LSU’s rout of Oklahoma, and the Bengals can take the Heisman Trophy winner if they wish.

Dalton threw a 15-yard touchdown pass and scrambled 5 yards for another score in the Bengals’ highest-scoring first half of the season for a 20-16 lead. He finished 16 of 28 for 190 yards.


“There’s been a lot of support for me and my family from this city, not just for what we did on the field but off it,” Dalton said. “This city has meant a lot to my family.”

The Browns hitched their hopes to Mayfield, who was inconsistent behind an offensive line that struggled to protect him. He threw three interceptions and was sacked a season-high six times Sunday.

Mayfield threw touchdown passes of 46 yards to Damion Ratley, 56 yards to Jarvis Landry, and 20 yards to Beckham. He also threw a pair of interceptions to Darius Phillips, one of which set up a Bengals touchdown, and finished with 21 for the season.

The biggest question for Cleveland is whether to keep Kitchens, who had never been a head coach before this season. He was elevated from running backs coach to offensive coordinator last season after Hue Jackson was fired.

“Of course it’s a big challenge,” Kitchens said. “There’s a lot of firsts. I’m not making any excuses at all, but I think I learned during the course of the year so I can be a better version of myself moving forward. That’s the only thing you can do.”

Mayfield took steps back, throwing five fewer touchdowns and seven more interceptions than in his rookie season. Mayfield said after the game that the Browns need more consistency and leadership, and he’s going to work on providing both.

Cleveland’s Nick Chubb ran for 41 yards as he tried to nail down the NFL rushing title. Chubb finished the season with 1,509 yards, the most by a Brown since Jim Brown had 1,544 in 1965. … For the first time, the Browns had two receivers (Beckham, Jarvis Landry) and a running back each top 1,000 yards in a season. … Cincinnati’s Joe Mixon ran for a career-high 162 yards and topped 1,000 for the second straight season. Tyler Boyd topped 1,000 yards receiving for the second year in a row. … The Bengals ended a streak of three straight Browns victories in the intrastate series. Cincinnati leads the series overall 51-42.

The Bengals averaged 47,178 fans at Paul Brown Stadium this season, their lowest since it opened in 2000.

Browns: In 2020, Cleveland will try to end the NFL’s longest active streak of failing to reach the playoffs — 17 straight years.

Bengals: In 2020, Cincinnati will try to end its 29-year streak without a playoff win, the fifth-longest in NFL history.