Jackson vs. Allen: Showdown of NFL’s next generation quarterbacks 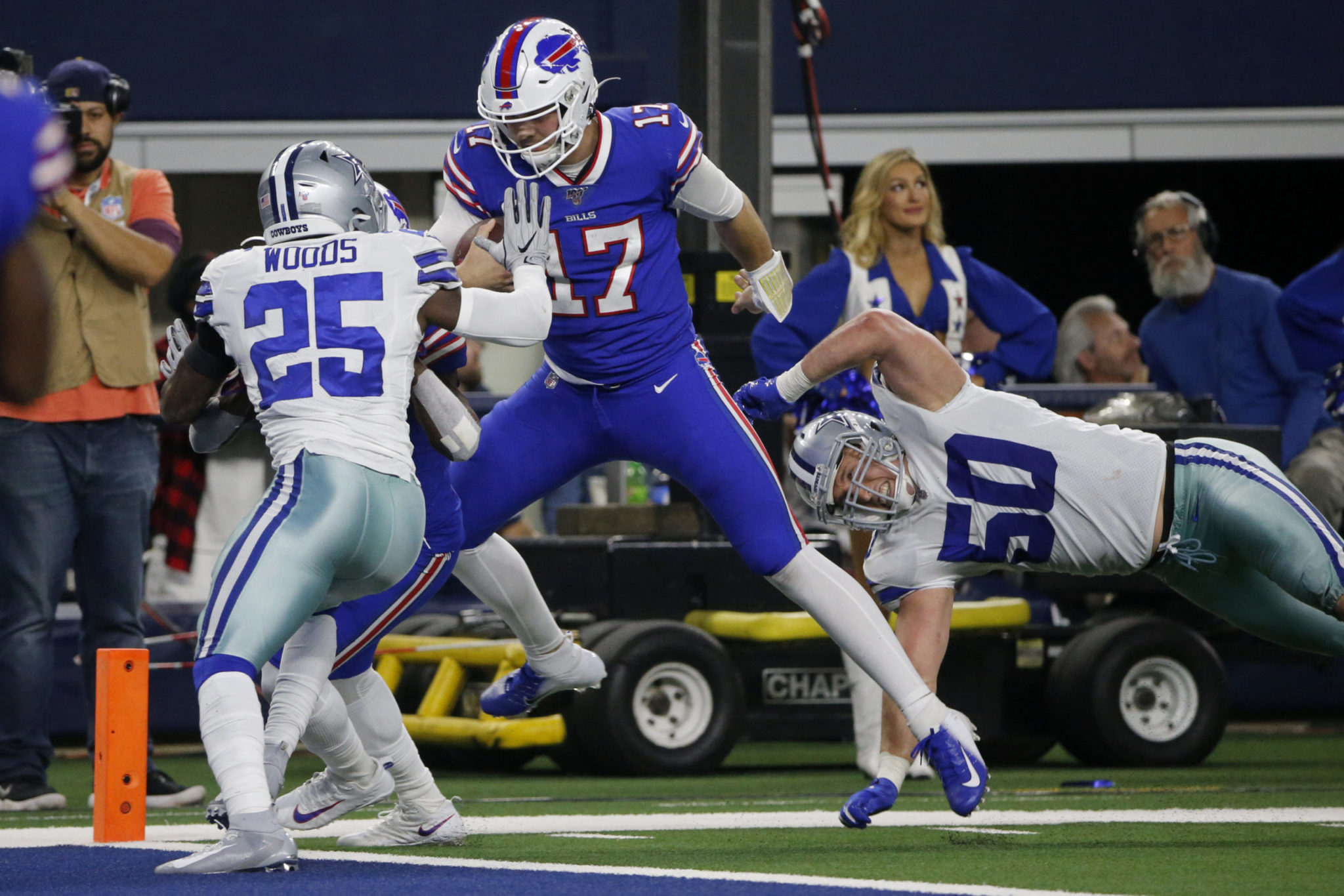 It’s easy to forgive Ravens coach John Harbaugh for forgetting this weekend’s showdown of two of the AFC’s more dynamic quarterbacks won’t be the first meeting between Baltimore’s Lamar Jackson and the Buffalo Bills’ Josh Allen.

The score was so lopsided and the 15 months which have passed feel more like a decade for Harbaugh to have missed the significance of the moment in Baltimore’s 2018 season-opening 47-3 romp over Buffalo. That’s when Allen, first, and then Jackson — two members of the highly touted 2018 first-round quarterback draft class — made their respective NFL debuts 81 seconds of game clock apart in the third quarter.

“That’s a pretty cool thing to think about. I certainly didn’t think about it then in the moment, and not until you mentioned it right here, actually,” Harbaugh said during a conference call with Buffalo-area reporters Wednesday. “That’s a really cool thought to see how far they’ve both come.”


The two won’t be playing second fiddle to anyone Sunday in a much-anticipated meeting of AFC playoff contenders, who owe much of their success to the sudden emergence of their second-year quarterbacks. The Ravens (10-2) have are on a franchise-best eight-game winning streak, while the Bills (9-3) have matched their best record through 12 games in 23 years.

“I think you’re seeing the next generation of quarterbacks,” Harbaugh said in assessing the dual-threat similarities Jackson and Allen possess.

Jackson, who made his playoff debut a year ago, and Allen are steps ahead of higher-profile members of their quarterback draft class, which included Baker Mayfield, selected first by Cleveland, and Sam Darnold, taken third by the New York Jets. Then there’s Josh Rosen, selected 10th by Arizona, who’s already on his second team after being traded to Miami, where he’s spent much of the season backing up Ryan Fitzpatrick.

Jackson, selected 32nd overall, is a MVP candidate three years removed from winning the Heisman Trophy at Louisville. He’s overseeing an offense that’s scored an NFL-leading 49 touchdowns and in position to become the first to finish a season averaging more than 200 yards rushing and 200 yards passing.

Allen, whom the Bills traded up five spots to select seventh overall, has taken a little longer to develop while becoming accustomed to an offense that opened this season with nine new starters. He’s found his groove during a three-game winning streak capped with what was considered Allen’s national coming out party in a 26-15 win at Dallas on Thanksgiving.

Having cleaned up his early season turnover issues, Allen has 13 touchdowns passing and five rushing against three turnovers (two interceptions) in his past eight.

“It seems like so long ago, I can’t describe it,” Allen said of his career debut in which he finished 6 of 15 for 74 yards and oversaw a 12-play, 46-yard drive capped by a field goal. “We were down by a lot. But I still remember going out there and just trying to make plays for my team. And really, nothing’s really changed in that aspect.”


Allen, who hurdled Vikings linebacker Anthony Barr in a 27-6 win at Minnesota last year, hasn’t shied away from contact. His fearlessness was once again on display at Dallas last week, when Allen fumbled the snap, scooped up the loose ball and somehow plowed through the line for a 2-yard gain to convert a fourth-and-1 at the Cowboys 30.

It’s a quality Bills receiver John Brown first noticed in Allen when Brown was playing for the Ravens a year ago.

“He was still playing like they still had a chance to win,” said Brown of Allen, who entered the game with Buffalo down 40-0. “The confidence and stuff, and I’m like, `Wow.’ I was really surprised by that.”

Jackson has turned in his share of highlight-reel performances in having earned four AFC offensive player of the week honors already this season.

Bills defensive coordinator Leslie Frazier referred to Jackson as being “a Houdini” for his ability to hide the ball and keep defenses guessing in running a Ravens offense that leans heavily on run-pass-option plays.

Following a 20-17 win over San Francisco last week, Jackson became the NFL’s first quarterback to top 950 yards rushing and 2,500 passing. With 977 yards rushing, he’s 63 yards from breaking Michael Vick’s single-season record for the most by a quarterback.

“It would be pretty cool, but you know, I’m focused on winning regardless,” Jackson said of surpassing his boyhood idol.

Jackson also isn’t interested in being drawn into comparisons with his fellow second-year quarterbacks.

Jackson does have a fan in Allen.

The Bills quarterback recalled being in high school in California in 2015, when he first saw a video featuring Jackson toying with defenders — he wagged his finger at one, and then stopped short in his tracks to elude another — while scrambling for a touchdown during his senior high school season in Florida.

Though Jackson has a much-higher profile, Allen noted both have had to overcome challenges in reaching the NFL.

Jackson faced constant questions over whether his running style would translate to the college and pro levels. Allen, meanwhile, was under-recruited and eventually had to attend a junior college before finally getting a scholarship offer from Wyoming.

“Being a guy who’s kind of had that situation where guys want to doubt you, and to go see what (Jackson’s) been doing, just proving everybody wrong has been awesome to watch,” Allen said.

Sunday, the two will be on a level playing field as starters.

“It’s kind of surreal to now be in the position that I’m in,” Allen said, thinking back to his debut at Baltimore. “I feel night and day as far as football perspective, knowledge of the game, knowledge of my own offense. But that was one of those moments I got to learn from. That was really cool.”