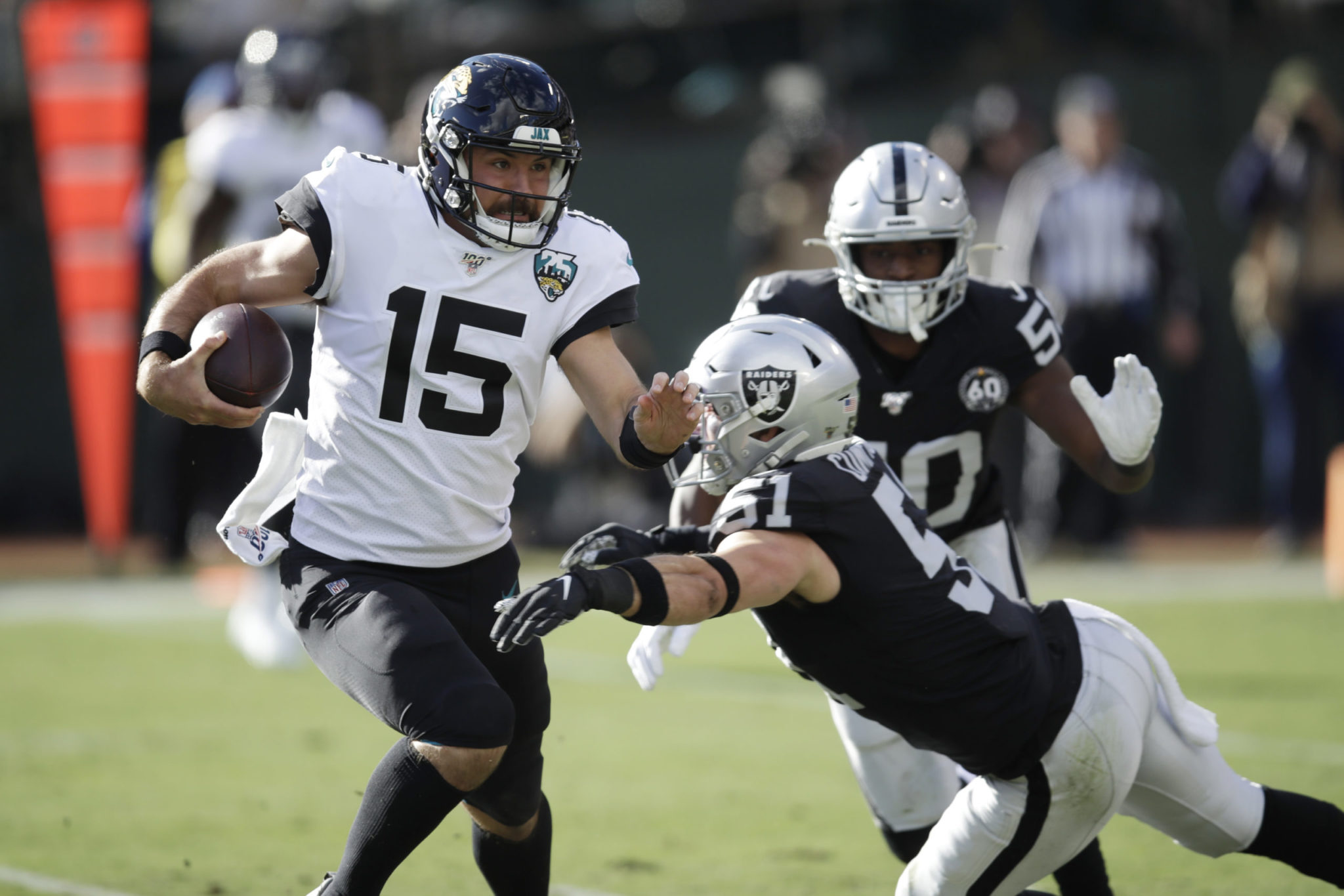 Gardner Minshew threw two TD passes to Chris Conley in the final 5:15 of the game and the Jacksonville Jaguars spoiled the final scheduled game at the Oakland Coliseum by beating the Raiders 20-16 on Sunday.

The Raiders (7-7) broke out to a 16-3 lead and appeared comfortably ahead before falling apart in the closing minutes to put a damper on an already somber day in Oakland.

The Raiders tried to run out the clock and got a pair of first-down runs from Josh Jacobs and another from Derek Carr. But Carr was ruled out of bounds with 2:05 to play after trying to slide down inbound, sparing the Jaguars from using a timeout.


Oakland then got a delay of game in the confusion and Tyrell Williams dropped a third-down pass. Daniel Carlson then missed a 50-yard field goal only to get another chance after Parry Nickerson was called for running into the kicker.

Carlson missed again from 45 yards and the Jaguars took over at the 35 with 1:44 to go. Minshew moved them down the field and connected with Conley on the 4-yard score with 31 seconds left.

The Raiders moved the ball to the Jacksonville 40, but Carr’s two desperation throws in the closing seconds fell incomplete and the Jaguars held on for the win.

Some frustrated fans threw debris on the field but most just sat quietly in the stands after the last of 327 games played at the Coliseum as the “Autumn Wind” played. Several Raiders, including Carr, walked to the Black Hole to thank the fans, many of whom booed as Carr ran off the field for the final time.

It was a day with plenty of emotions from the fans who have been part of the Black Hole for years and the former players who came back to pay their final respects to Oakland. The pregame environment was mostly celebratory with fans soaking it all in at the tailgates.

Security guards surrounded the field beginning late in the third quarter in hopes of preventing fans from rushing on the field and the biggest issue came early in the fourth quarter when referee Bradley Rogers politely asked fans not to shine lasers on the field.


The game had little meaning on the standings as the Jaguars came in on a five-game losing streak and the Raiders had dropped three in a row, all by at least 21 points.

The Raiders broke out to a 16-3 lead thanks to a 40-yard TD pass from Carr to Tyrell Williams on the first drive and three field goals by Carlson. But Oakland didn’t score again.

The Raiders showed a highlight video of their history at a halftime ceremony. Dozens of former Raiders players including Hall of Famers like Marcus Allen and Fred Biletnikoff were honored on the field with Charles Woodson addressing the crowd at the Coliseum.

Woodson said the players came back to root on the team and to thank the Oakland fans who have supported the team through the years.

He then led the crowd in a resounding chant of “Rai-ders! Rai-ders!?

Raiders: RB Josh Jacobs played despite being limited by a shoulder injury.