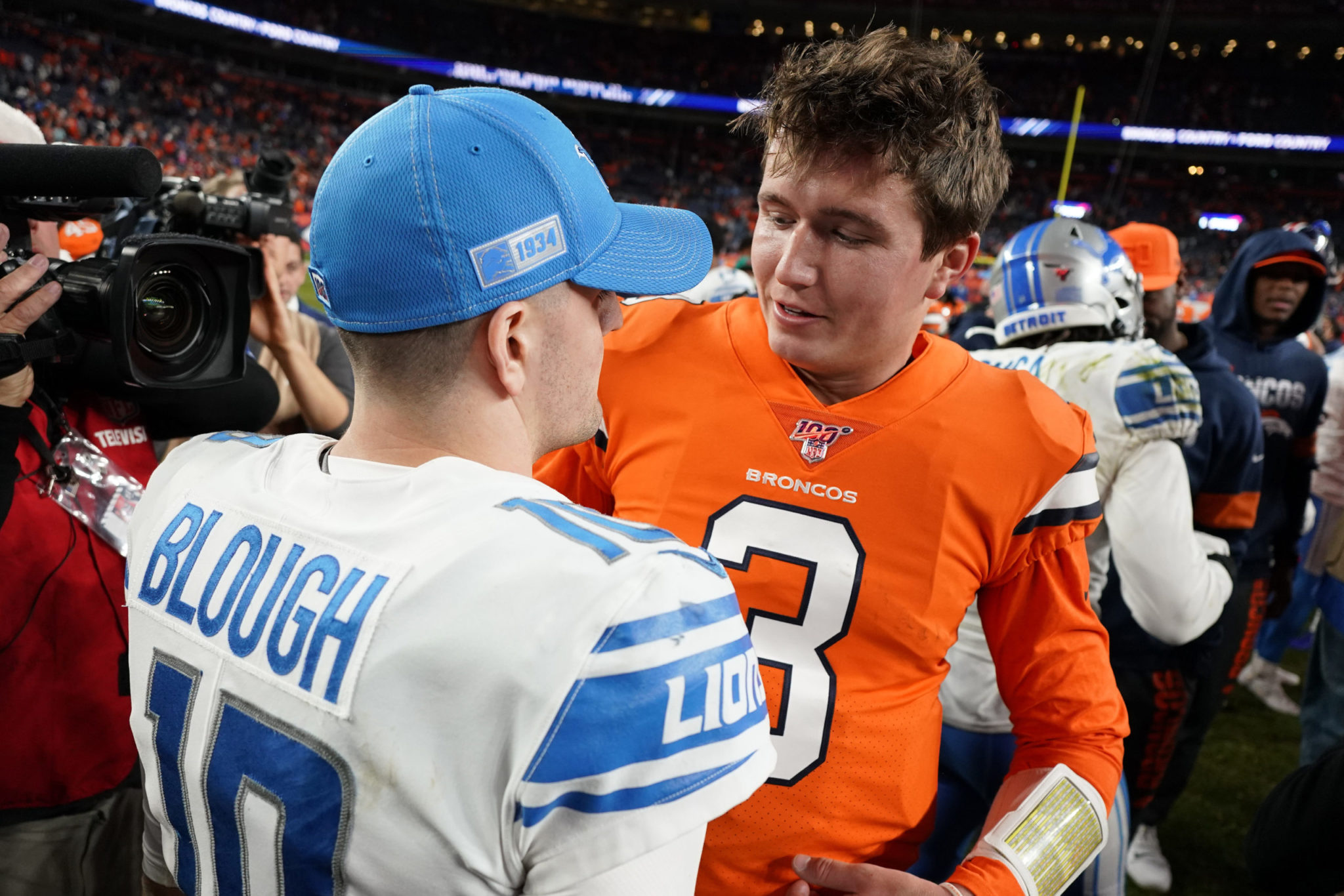 By his own critique, Drew Lock’s celebratory shuffle dance was shaky at best.

His fancy footwork on the field, though, was anything but jittery. The rookie quarterback stood out even above those hard-to-miss, all-orange uniforms worn by the Denver Broncos.

Lock threw a shovel pass to DaeSean Hamilton to put Denver ahead, Phillip Lindsay sealed the game with a late TD scamper and the Broncos extended the Detroit Lions’ skid to eight straight with a 27-17 win Sunday.

Lock was under the weather, too. He had a sore throat, achy chest and a headache all week. This performance provided the perfect remedy.

Trading the snow for much balmier conditions, Lock efficiently led the offense to a comeback win. He finished 25 of 33 for 192 yards in improving to 3-1 as the Broncos starter. His only loss was last weekend in Kansas City when the field was covered in snow.


No need to worry about blizzard-like conditions this time.

Denver had to rely on a patch-work offensive line with Dalton Riser leaving due to the flu and Elijah Wilkinson hurting his ankle. They already were without Ron Leary and Ja’Wuan James.

“We’re not proud of our record. But we are proud of this team,” Broncos coach Vic Fangio said. “A one-for-all, all-for-one mentality.”

The Lions (3-11-1) got a punt return for a score from Jamal Agnew along with sporadic play from rookie QB David Blough, who was under constant pressure and sacked four times. Detroit hasn’t won in two months.

“Go back and watch the tape and try to learn and improve and capitalize on the mistakes that you made that could have swung the game the other way,” Blough explained. “We’ve just got to make those plays when it matters.”

On the ensuing drive, Denver reached deep into its play book to pick up a fourth-and-1 near midfield. Fullback Andrew Beck took the ball from Lock on a sweep and then tossed it to a trailing Lindsay, who picked up the first down. Beck was credited with a 6-yard pass completion.


Later on, Lock completed a flip pass to Hamilton for a 3-yard score and the Broncos wouldn’t trail again. Lindsay gave them some insurance with a 27-yard TD scamper as he finished with 109 yards rushing.

Simply part of a new Broncos mind-set — take some risks.

“What is there to hold back? Why hold back?” Lock said. “We can’t make it to the playoffs. Have some momentum going into the offseason.”

The Broncos appreciate the swagger of Lock. He’s even game to show off his dance moves. Lock said he “nailed it” in the locker room, but not so much when he took his dance production to a bigger stage.

That can be overlooked since he was in perfect step on the field.

“He’s calm, cool, collected and he understands what he needs to work on and what he’s good at,” said Lindsay, who’s 42 yards away from his second straight 1,000-yard season. “He’s a game changer.”

Denver safety Trey Marshall made his first start with Kareem Jackson suspended over a DUI case. Marshall was involved in a big play in the fourth when Golladay broke free deep. It looked as if Marshall knocked the ball away, but replays showed Golladay couldn’t secure it.

Agnew weaved his way through the teeth of the Broncos coverage unit and then avoided diving punter Colby Wadman for a 64-yard score in the second quarter. His TD gave Detroit a 10-0 lead.

“I caught it and just let my feet do the rest,” Agnew said.

Kicker Matt Prater moved past a big name on Detroit’s career scoring list with his 26-yard field goal in the first quarter. He surpassed Hall of Famer Barry Sanders for the third-most points.

Social media was buzzing over the brace Lock wore on his left knee. He donned a similar brace in his other starts, but this version happened to stick out more set against Denver’s bright uniforms.

Kerryon Johnson returned for the first time in two months and finished with 10 carries for 42 yards. He’s been on injured reserve with a knee injury.

“It was fun,” Johnson said. “I was making the correct reads for the most part and it just felt really good.”

Lions: Linebacker Jahlani Tavai left with a shoulder injury. Coach Matt Patricia said he will be evaluated in Detroit.

Broncos: Finish the season at home against Oakland on Sunday.

Pat Graham is an Associated Press sports writer based in Denver. He is also a Baseball Hall of Fame voter. Follow him on Twitter @pgraham34