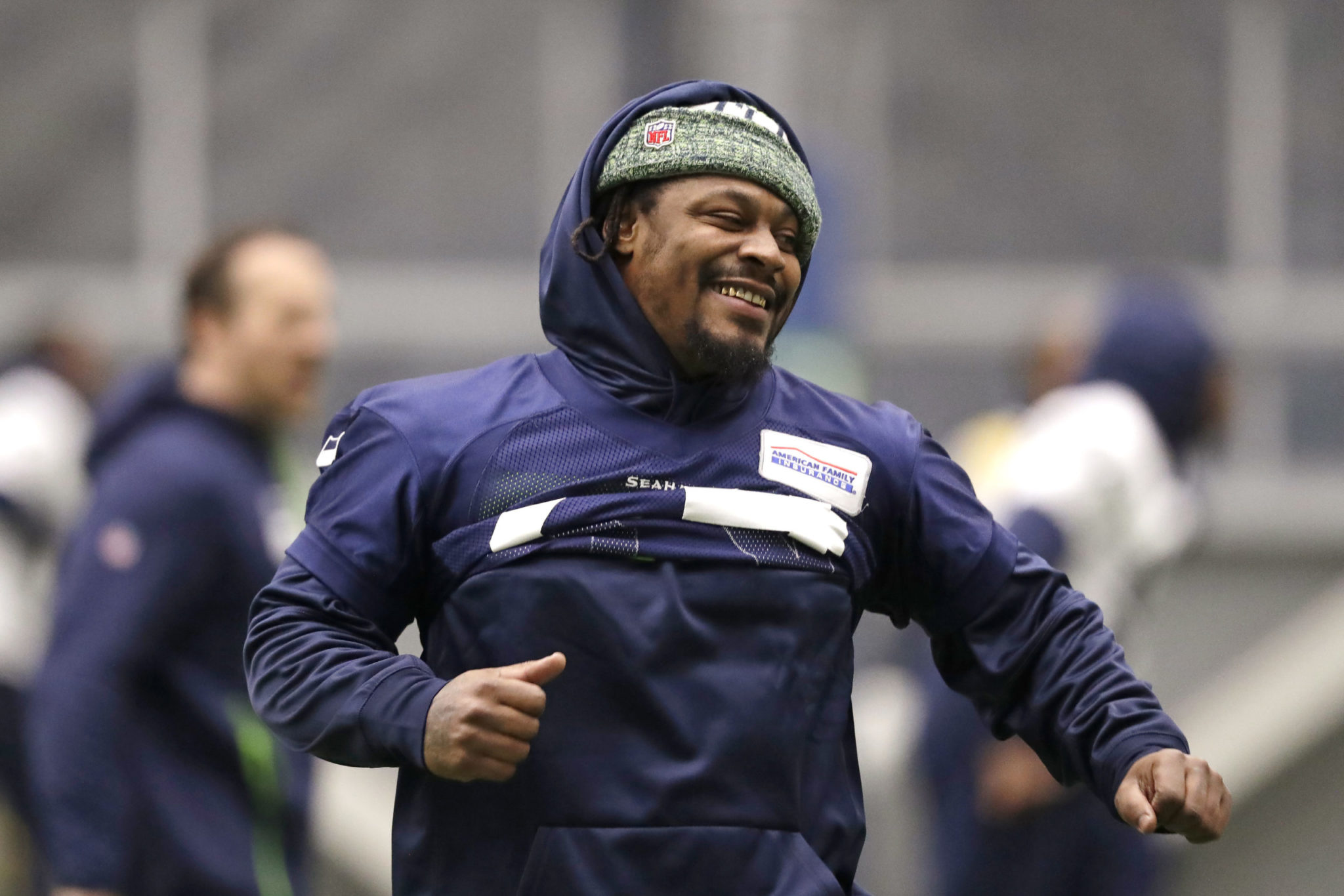 When Marshawn Lynch played his last game for Seattle in January 2016, a playoff loss to Carolina, the idea of him ever wearing a Seahawks uniform again seemed preposterous.

Yet here was Lynch on Tuesday going through his first practice with Seattle in nearly four years, and potentially tasked with playing a major role on Sunday against San Francisco with the NFC West title on the line.

When it comes to NFL reunions, this is as unlikely as it gets. Not just Lynch back on a football field after more than a year away, but back in Seattle.

“What I needed to hear from him is where his heart is. Is he in it and does he want to go for it, which he totally does,” Seattle coach Pete Carroll said. “He’s worked to prove that. I don’t doubt him one bit about that. He’s very sincere about how he presents himself to this game and it’s very important to him to be at his best and do well, and he’s going to do everything he can to make that happen.”


The arrival of Lynch was a spark of energy inside a Seattle locker room that was left reeling after Sunday’s 27-13 loss to Arizona. Not only were the Seahawks run over by the Cardinals, they lost their most direct path to the No. 1 seed in the NFC playoffs and their top two running backs to injury.

Lynch may end up being great in Seattle’s backfield. He may end up looking like a 33-year-old who hasn’t played in more than a year. But the idea of “Beast Mode” carrying the ball once again in a Seattle uniform galvanized not only the fan base, but a locker room of players who mostly haven’t had Lynch as a teammate.

Linebacker K.J. Wright, one of the few holdovers from Lynch’s last season, said some of the younger players seemed a bit in awe of Lynch being back in Seattle’s locker room.

“Only one person can pull this off and that’s No. 24,” Wright said. “Back in the building, it feels good. When I heard the news I was like, ‘Perfect.’ He’s just the ultimate teammate, cool dude, just ballin’. I’m glad to have him back.”

Seattle made official the signings of Lynch and Robert Turbin — the same backfield combo it used from 2012-14 — on Tuesday. The Seahawks placed injured running backs Chris Carson (hip) and C.J. Prosise (arm) on injured reserve to open up the roster spots.

Lynch made a surprise media appearance after practice for all of 9 seconds, saying, “Happy holidays. Merry New Year. You all have a great day. It’s a great feeling to be back.”

But he did expand on his decision in a video posted on his Beast Mode Productions YouTube channel that was shot a few days ago. It was clear in the video that there had been discussions of a return to Seattle before news broke on Monday.

It’s also clear that Lynch initially thought he was coming back to be the complement to Carson. Now he may be asked to take Carson’s role.

Lynch also said he had some “unfinished business,” in reference to Seattle’s Super Bowl loss to New England.

What’s uncertain is what Lynch can provide Seattle’s offense. The scheme is similar to the last time he was with the Seahawks, but the team has a different offensive coordinator and different offensive line coach. None of the linemen who will block for Lynch on Sunday were around the last time he had a carry for the Seahawks — a divisional round playoff loss to Carolina on Jan. 17, 2016.

“What he brings and what he offers, he brings a lot to the table,” Carroll said. “He’s as physical a player as I’ve ever been around, as great a competitor as I’ve ever been around and when you get to add somebody like that to your team it only helps and enhances kind of the mentality that we already cherish anyway. We’ll find out how he can play and how he does. It’s been a little while off.”