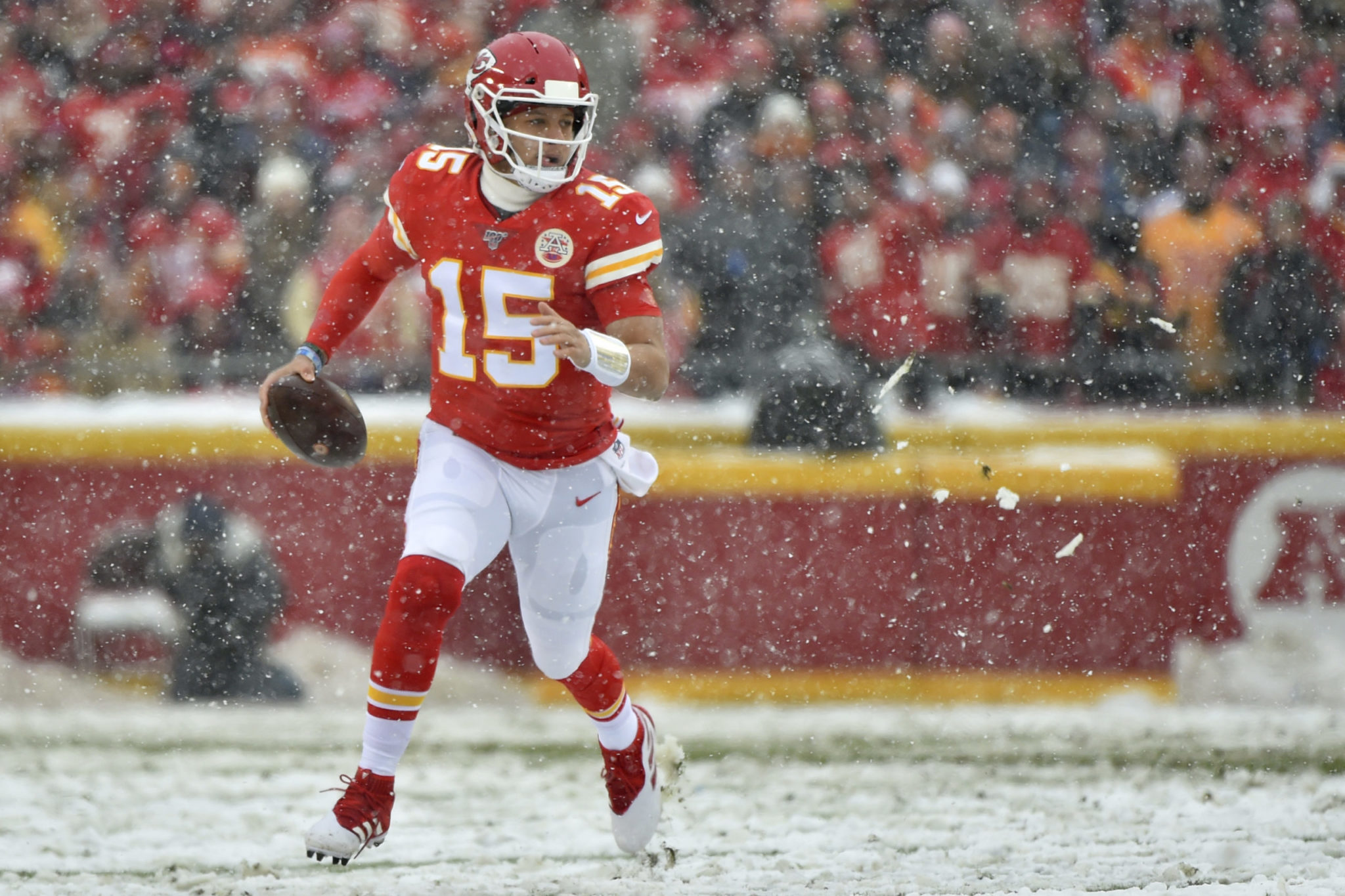 Patrick Mahomes leaned his head back with a smile stretching ear to ear, gazing up toward the sky as snow swirled around him, the young quarterback lost in the surreal atmosphere of the giant Arrowhead Stadium snowglobe.

Such pure joy, and the game hadn’t even started yet.

In wintry conditions that should have made it hard to throw the ball and even more difficult to catch it, the reigning league MVP showed once more why he is among the best quarterbacks in the league. Mahomes completed 27 of 34 passes for 340 yards and two touchdowns against the Denver Broncos — the second-best completion percentage of his young career — and led the Chiefs to a 23-3 victory Sunday to remain in the hunt for a first-round playoff bye.

“It’s pretty unbelievable, man. He was winging it,” said Chiefs tight end Travis Kelce, who was on the receiving end of 11 passes for 142 yards. “Those weren’t just balls like shotputs that you normally see in the snow or a really bad rain game. He was out there letting it fly, and he’s a special guy. I’ve never seen anyone throw it like that in the snow, that’s for sure.”


Making it more incredible is that Mahomes has very little experience in the snow.

He grew up playing youth and prep football in Texas, and he starred in college at Texas Tech. He’s more accustomed to playing in 100-degree heat than 10-degree wind chills. Mahomes played in a couple of frigid games late last season, including a playoff loss to New England, but nothing that compared to the scene Sunday.

The snow began before the sun came up. It slowed briefly around kickoff, then picked up again during the second half, at times obscuring the view of Kauffman Stadium about a quarter mile across the parking lot from Arrowhead.

“I was impressed, too!” said Chiefs running back Darwin Thompson, when asked about his quarterback’s performance. “We can do it in any weather, any time, on the concrete in front of Walgreens. Where do you want it? We can play ball whenever. Patrick Mahomes, he’s a future Hall of Famer. Travis Kelce and them boys, you see them out there catching the ball? On the other side, they weren’t doing it like we were, and I’m like, ‘We really out here playing in the snow?’”

Not just playing but thriving.

The Chiefs scored on their first four possessions — albeit three field goals — and kept the Broncos out of the end zone entirely. Mahomes was a big reason for the success, hitting eight different targets and finding Tyreek Hill for two scores.

The first was a long heave that hit the speedster in stride, the ball placed so perfectly that Hill kept running right through the end zone and up the tunnel beneath the stadium. The second showed the ability of Mahomes to throw every kind of pass imaginable, a short out-route that allowed Hill to waltz into the end zone from five yards out.

“With Patrick being able to throw the ball all over the field,” Hill added, “and with my route-running, I feel like it’s just timing. Obviously we practice it during the week. But it’s just the connection and bond that me and Patrick have.”

It’s a bond that Mahomes seems to have with everyone on the team.

His performance against Denver wasn’t flawless, of course. On one pass play, he rolled to his right and was under heavy pressure when he winged a pass into double coverage in the corner of the end zone. The Broncos picked it off, not only foiling a promising drive but one that should have ended at worst with a field goal.

Given the conditions, though, what Mahomes showed off Sunday only added to his growing fame.

“You understand how important these games are,” Mahomes said, “and even though we kind of have the AFC West clinched now, you understand they are still important games. You want to make sure you keep pressing on and keep getting better every single week. We knew the Broncos were playing really good football coming in and so we just attacked it with the mindset that we were going to go out day by day and keep this process moving.

“We had a good day and we get to go to Chicago next week and play a good football team.”