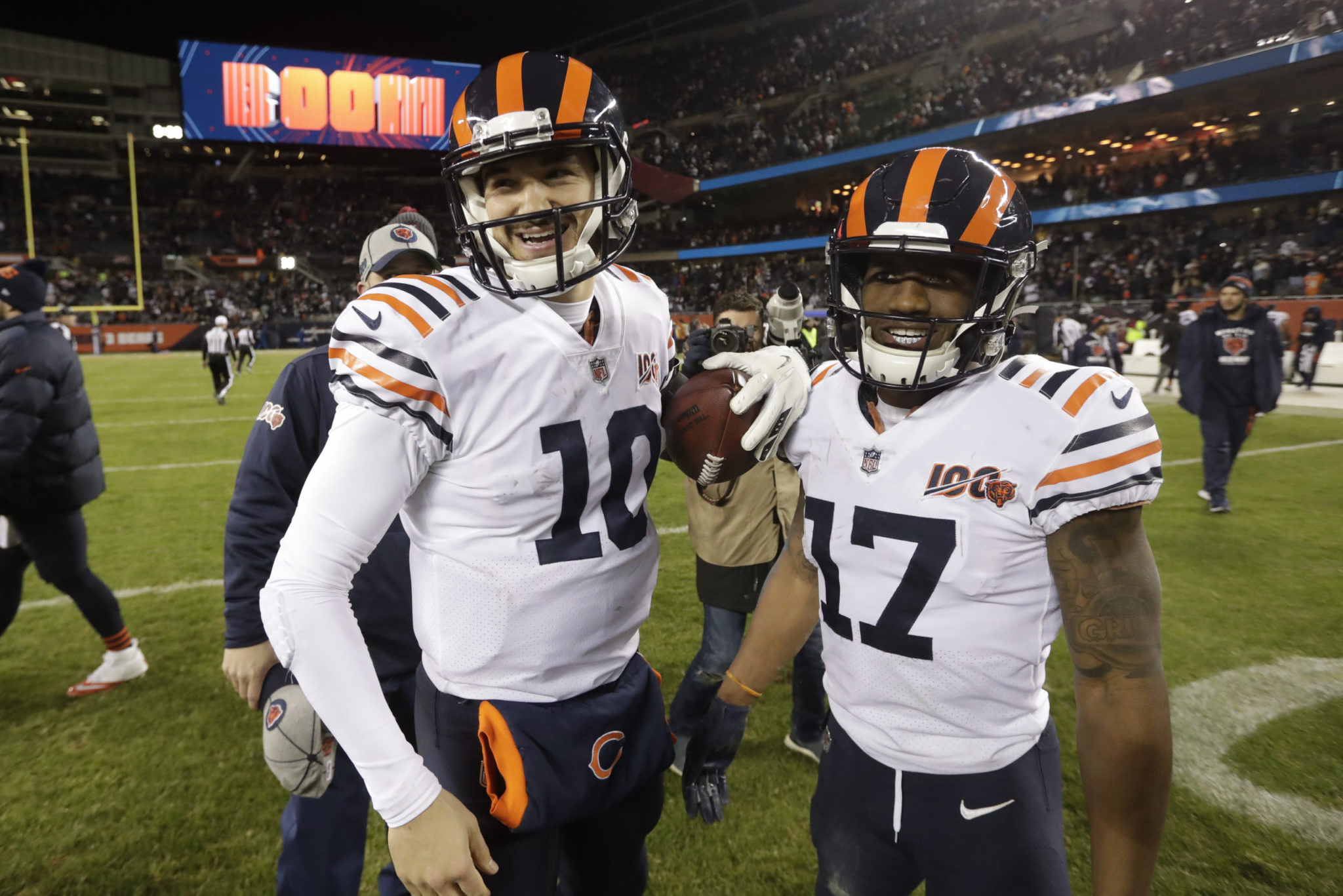 Mitchell Trubisky and the Chicago Bears appear to be hitting their stride, even if it might be too late to salvage their season.

Trubisky threw three touchdown passes and ran for a score in Chicago’s 31-24 victory over Dak Prescott and the slumping Dallas Cowboys on Thursday night.

In a matchup between disappointing teams that made the playoffs last season, the Bears (7-6) came away with their fourth win in five games after dropping four in a row. The Cowboys (6-7) have lost seven of 10 since a 3-0 start.

“I think it shows we’re resilient,” Trubisky said. “We stick together. We believe in each other even when nobody else believes in us. It’s a special group in that locker room. We just want to keep this feeling going.”


Trubisky shook off an early interception near the goal line to complete 23 of 31 passes for 244 yards. He matched a season high for touchdown throws and set one with 63 yards rushing. That included a 23-yard scoring dash early in the fourth quarter to make it 31-14.

On defense, Khalil Mack had a sack but l inebacker Roquan Smith left the game with a pectoral injury on the opening drive, with coach Matt Nagy saying it “doesn’t look real good for him.” Still, the Bears took out the NFC East leaders after beating the struggling Detroit Lions twice and New York Giants in recent weeks.

“Most teams at some point in time will hit some type of adversity,” Nagy said. “We went through that four-game stretch. It was difficult in a lot of different ways. … Everybody’s seeing what type of people we have on this football team. No one’s flinched. We’ve pulled together. We’ve become even tighter.”

Facing a top-10 defense for the third week in a row, the Cowboys once again couldn’t get their high-powered offense going.

“I can’t put a finger on it,” said Prescott, the NFL’s passing leader. “I wish I could right now. If I could we wouldn’t be in this situation, we would be getting over this and out of this slump, but that’s the most frustrating part, we have the skill level, we have the players, we have the chemistry at times, But we’re not playing together as a team, complementary enough when we need to, and we need to figure it out.”

Michael Gallup had 109 yards receiving. Amari Cooper caught six passes for 83 yards and a touchdown, but the Cowboys lost their third straight. They lead Philadelphia by a half-game in the division.

“I know we have the right pieces in place, right players, right talent. Just about doing it instead of talking about it,” Cooper said.

Kept out of the end zone in a 13-9 loss at New England two weeks ago and then held to two touchdowns in falling 26-15 to Buffalo on Thanksgiving, the Cowboys went 75 yards for a score on the game’s opening possession. Elliott lunged in from the 2 to cap a 17-play drive.

Jourdan Lewis then intercepted Trubisky’s pass with a neat play near the left pylon, dragging his left foot. He was initially ruled out of bounds, but the call was overturned by a replay review.

But it was all Bears after that.

Chicago tied it early in the second quarter when Trubisky hit Robinson with a 5-yard pass and took a 10-7 lead on a 36-yard field goal by Eddy Piñeiro. Dallas’ Brett Maher then missed a 42-yarder wide right. Chicago added to the lead in the closing seconds of the half with Trubisky’s 8-yard pass to Robinson, and Miller’s 14-yarder in the third made it 24-7.

“I think we stayed ahead of the chains, we scored early, we were able to get the run game going,” Robinson said. “All aspects of our offense were working today. We were able to keep them off balance.”

Maher is 20 for 30 on field goals this season after going 1 of 2. The 10 misses are more than any other NFL kicker has had in a season the past four years.

Bears: WR Javon Wims (knee) walked off gingerly in the closing seconds of the first half after an awkward landing as he tried to make a leaping catch in the end zone. … CB Prince Amukamara (hamstring) was inactive after being listed as doubtful. … WR Taylor Gabriel (concussion), TE Ben Braunecker (concussion) and RT Bobby Massie (ankle) all missed their second straight game.

Andrew Seligman writes about sports for The Associated Press.