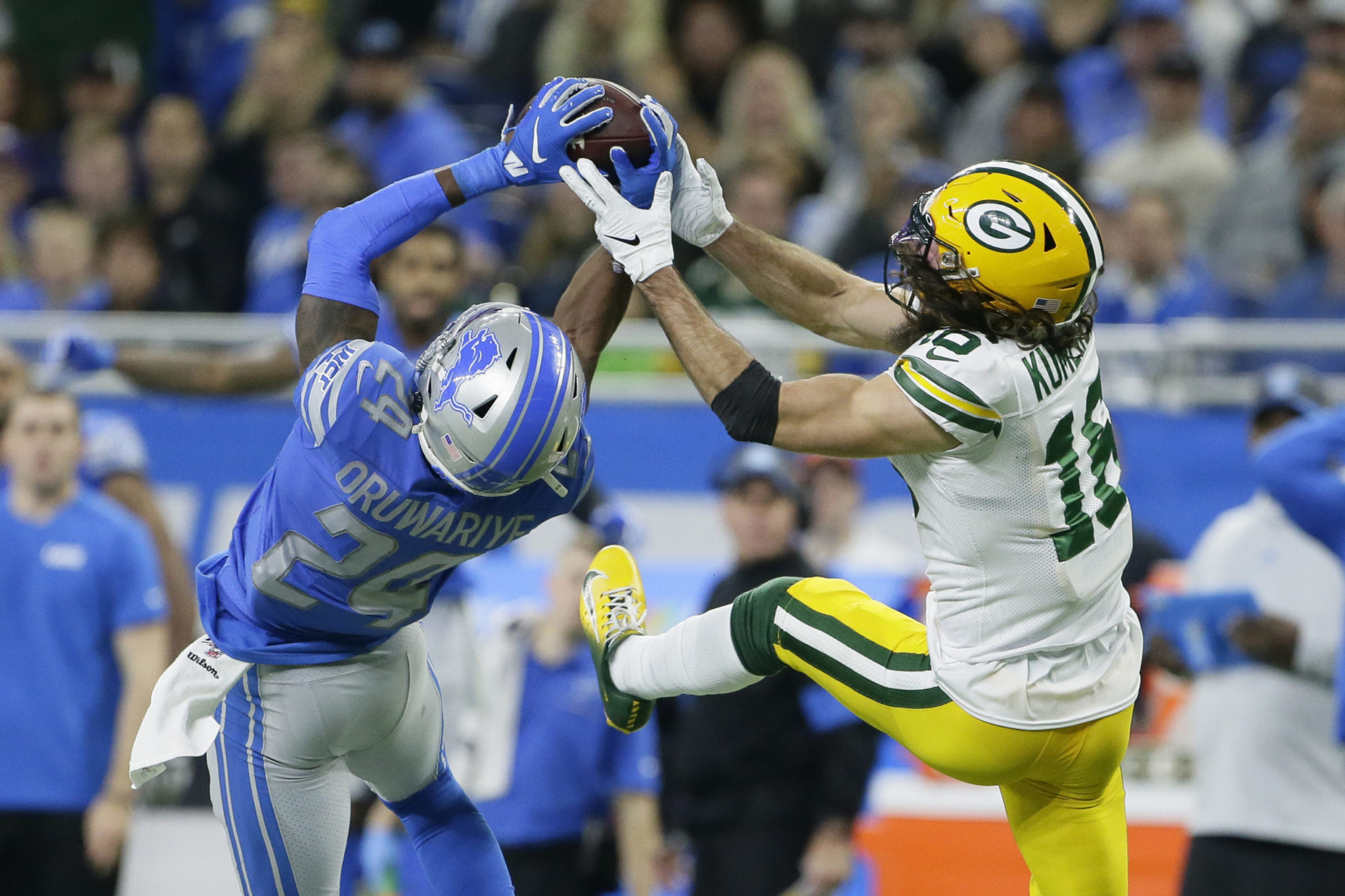 Aaron Rodgers was on the money when Green Bay needed him most, overcoming one of his worst games this season.

Rodgers threw a short and accurate pass to Aaron Jones, whose 31-yard reception set up Mason Crosby’s 33-yard field goal as time expired to lift the Packers to a 23-20 win over the Detroit Lions that earned them a first-round bye.

“We’re going to be a tough team to deal with in the playoffs,” Rodgers said.

The Packers (13-3) fell behind the last-place Lions by two touchdowns in the second quarter and didn’t lead until Crosby made his second game-winning kick against Detroit this season.


Green Bay won a fifth straight game despite Rodgers struggling for much of the afternoon. Rodgers was 27 of 55 for 323 yards with two touchdowns and an interception. He connected on less than half of his attempts for the second time this season and finished with his second-lowest rating of the year.

“Too many missed throws,” Rodgers acknowledged after throwing the most passes he has in 2019, tying the third-highest total of his career. “I felt good about the throws. That’s the crazy thing. We were just a little bit off at times.

“When we had to make a play, we made the play.”

Detroit did not, following a season-long trend.

“This game was in some ways a microcosm of our season,” guard Graham Glasgow said. “We started out well and we were running the ball, but when it came to the second half and finishing the game, we didn’t pull it out.”

David Blough was 12 of 29 for 122 yards with an interception — and a 19-yard touchdown reception — filling in for Matthew Stafford, who had a season-ending back injury.

Despite playing only for pride, the Lions looked as if they were more motivated to win early in the game against a team with a lot at stake.

And with nothing to lose, Detroit scored on a trick play midway through the first quarter. Blough handed off to receiver Danny Amendola, who threw back across the field to the rookie quarterback for a TD.

Kerryon Johnson converted a fourth down with a 1-yard TD run late in the first half, giving Detroit a 14-0 that stunned everyone not on their sideline.

“I know to a lot of people there wasn’t much on the line, but to us there is every single week,” coach Matt Patrica said. “We’re going to go out and we’re going to compete.”

Crosby and Matt Prater made field goals over the last 20 seconds of the first half, leaving the Lions with a 17-3 lead.

Rodgers started to make more accurate passes in the second half, such as 20-yard TD pass to Davante Adams and a 28-yard pass to Allen Lazard with 5:19 left for another score.

The Packers pulled into a 20-all tie after linebacker Blake Martinez had a sack and interception on consecutive snaps.

Jones, who overcame having his hand stepped on, finished with 100 yards rushing on 25 carries and had 43 yards receiving. Adams had seven receptions for 93 yards and a score.

There was a long moment of silence before the game for receiver Marvin Jones’ 6-month old son, who recently died. Jones, who was on the sideline with his family during the national anthem, went on injured reserve earlier this month.

Lions: WR Kenny Golladay didn’t return after being evaluated for a concussion following a 42-yard catch in the second quarter. LB Devon Kennard and TE Isaac Nauta each left the game with hamstring injuries. LT Rick Wagner (knee) was inactive.

Packers: Playing in the postseason for the first time since 2016, Green Bay will have at least a bye before hosting a game. “It gives us a great chance to do a lot of self-scout,” LaFleur said. “It gives our guys a chance to heal up. That was an exhausting game and we lost a couple guys.”

Lions: The franchise decided earlier this month general manager Bob Quinn and Patricia will get another season to lead the team, answering what was the biggest question for the offseason.