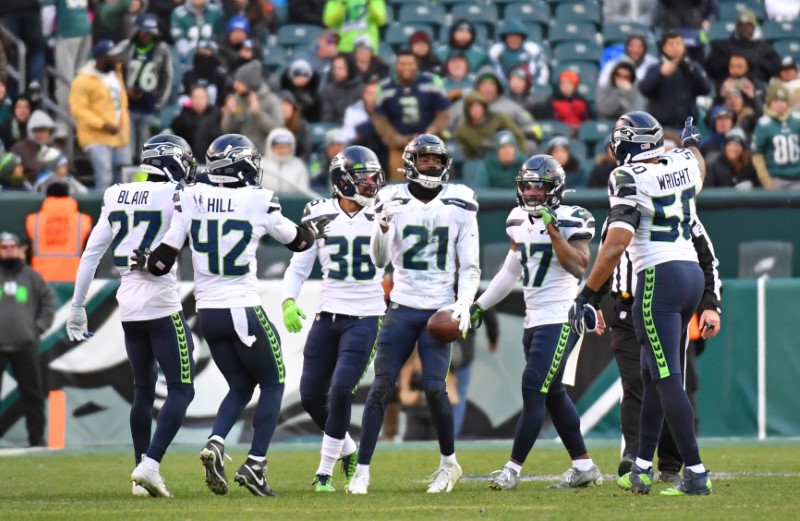 The Seattle Seahawks know exactly what is at stake when they hit the road to face the Los Angeles Rams on Sunday night: Win and they are in the playoffs.

That is the most obvious carrot dangling. There is more, of course, like keeping their spot atop the NFC West along with the San Francisco 49ers.

The Seahawks and 49ers are each 10-2 and on a potential Week 17 collision course in Seattle with the division title on the line.

The Seahawks are riding a five-game winning streak after a 37-30 victory Monday night against the Minnesota Vikings. And that victory to forge a tie atop the NFC West came hours after the 49ers had lost for the second time on the season, showing that Seattle knows how to step up to the occasion.

“We know we have another terrific opponent,” Seahawks coach Pete Carroll said. “It just seems like one after another after another. We just keep getting challenged by it. The teams keep bringing special players and schemes and histories of winning and all that stuff that just makes this a great run and a great challenge.


Seahawks quarterback Russell Wilson was efficient Monday with 240 yards passing and a pair of touchdowns, with an interception that he batted back to the Vikings for a pick-six. The Seattle running game did plenty of damage with 218 yards on the ground, including 102 from Chris Carson and another 74 from Rashaad Penny. Both backs scored a TD.

The Rams (7-5) are coming off an impressive victory of their own to keep their playoff hopes alive, defeating the Arizona Cardinals 34-7 on Sunday. The Rams are on the outside looking in at the NFC playoff picture, one game behind the Minnesota Vikings (8-4) for the second wild-card spot.

Quarterback Jared Goff threw for 424 yards and two TD strikes against the Cardinals as the Rams rebounded from an embarrassing 45-6 home defeat to the Baltimore Ravens. But the Rams’ offensive showing did come against Arizona’s NFL-worst passing defense.

The turnaround of note for the Rams on Sunday was on defense as the Rams gave up 198 yards of total offense and held Cardinals rookie quarterback Kyler Murray to 163 yards and an interception, with two other interceptions nullified by Rams penalties.

Another reason the Rams will head into Sunday’s game with confidence is their near victory over the Seahawks at Seattle on Oct. 3. The Rams lost 30-29 when reliable kicker Greg Zuerlein missed a go-ahead 44-yard field goal with 11 seconds remaining.

Goff threw 395 yards and a touchdown in that game, while Wilson threw for 268 yards and four TDs. The Rams remember it well.

“I had him like four times and I didn’t get him down,” Rams linebacker Dante Fowler said of the first meeting with Wilson and the Seahawks, per the Los Angeles Times. “So we got to do a better job of just getting him down when we can, and not let him extend those big plays, because when he gets out of the pocket he’s so dangerous.”


Rams tight end Gerald Everett (knee) still was not back at practice Wednesday after missing the game against the Cardinals. Tackle Rob Havenstein (knee) was limited but could see action for the first time since Nov. 10 at Pittsburgh.