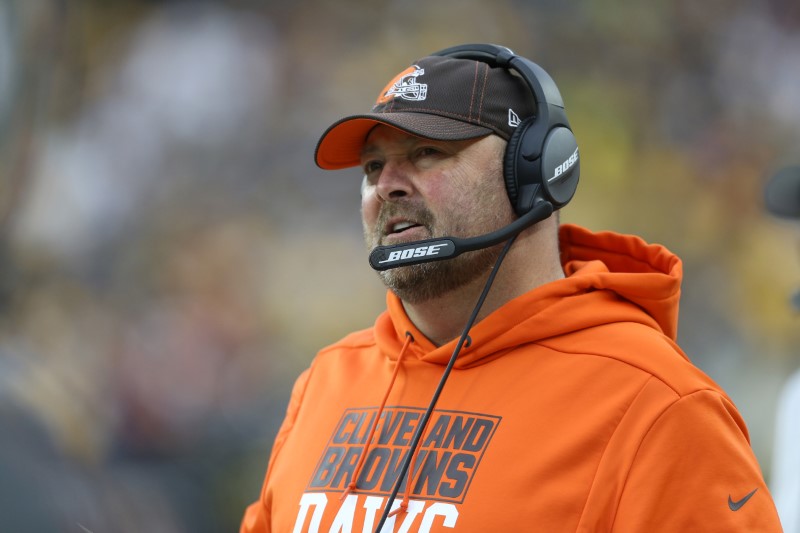 Two days after a photo of Cleveland Browns coach Freddie Kitchens wearing a brown T-shirt with the phrase “Pittsburgh started it” emblazoned in orange made the rounds on social media, some Pittsburgh Steelers players showed up for Sunday’s game with a message of their own.

Defensive tackle and team captain Cameron Heyward was among players sporting a “Free Pouncey” shirt as they headed into Heinz Field on Sunday morning.

Both shirts are referencing the fight between the teams on Nov. 14 that resulted in an indefinite suspension for Browns defensive end Myles Garrett. Pittsburgh’s Maurkice Pouncey was suspended three games — later reduced to two on appeal — for his part in the brawl.


While some Steelers players wearing the shirt opted to cover their faces with hoodies or masks, Heyward made no effort to mask his identity.

After the game, which the Steelers won 20-14, Pittsburgh players had pointed criticism for Kitchens and his decision to wear the shirt.

Right guard David DeCastro said it was “pretty stupid” of Kitchens to wear the shirt.

ESPN’s Adam Schefter reported that a Browns spokesperson said Kitchens’ children gave him the shirt “as a joke.” He wore it when he joined his family in seeing the Mister Rogers biopic, “A Beautiful Day in the Neighborhood.” While he wore a jacket over the shirt, his jacket was unzipped far enough for moviegoers to see the shirt. Friday was Kitchens’ 45th birthday.


The Browns told Schefter that Kitchens hadn’t planned for it to be seen and “understands it’s not a good look.”

Asked after the game about wearing the shirt, Kitchens said he’d do so again.

“I wore a T-shirt,” Kitchens told reporters. “I wore a jacket with it. My daughters wanted me to wear the shirt. I’d wear it again. I put on a jacket, I covered it up, I took a picture, that was simple as that. A T-shirt didn’t cause us to give up 40-yard passes. We were ready to play. That’s the only thing people need to be concerned about. We were ready to play.”

Fred Rogers, the subject of the movie, was a beloved resident of Pittsburgh, and a Steelers source told Schefter that Kitchens’ choice of apparel could be viewed as another act of disrespect toward the city.

The fight between the teams broke out at the end of the game, and Garrett ripped the helmet off the head of Steelers quarterback Mason Rudolph and swung it at him. In all, 33 players and both teams were fined a total of $732,422.