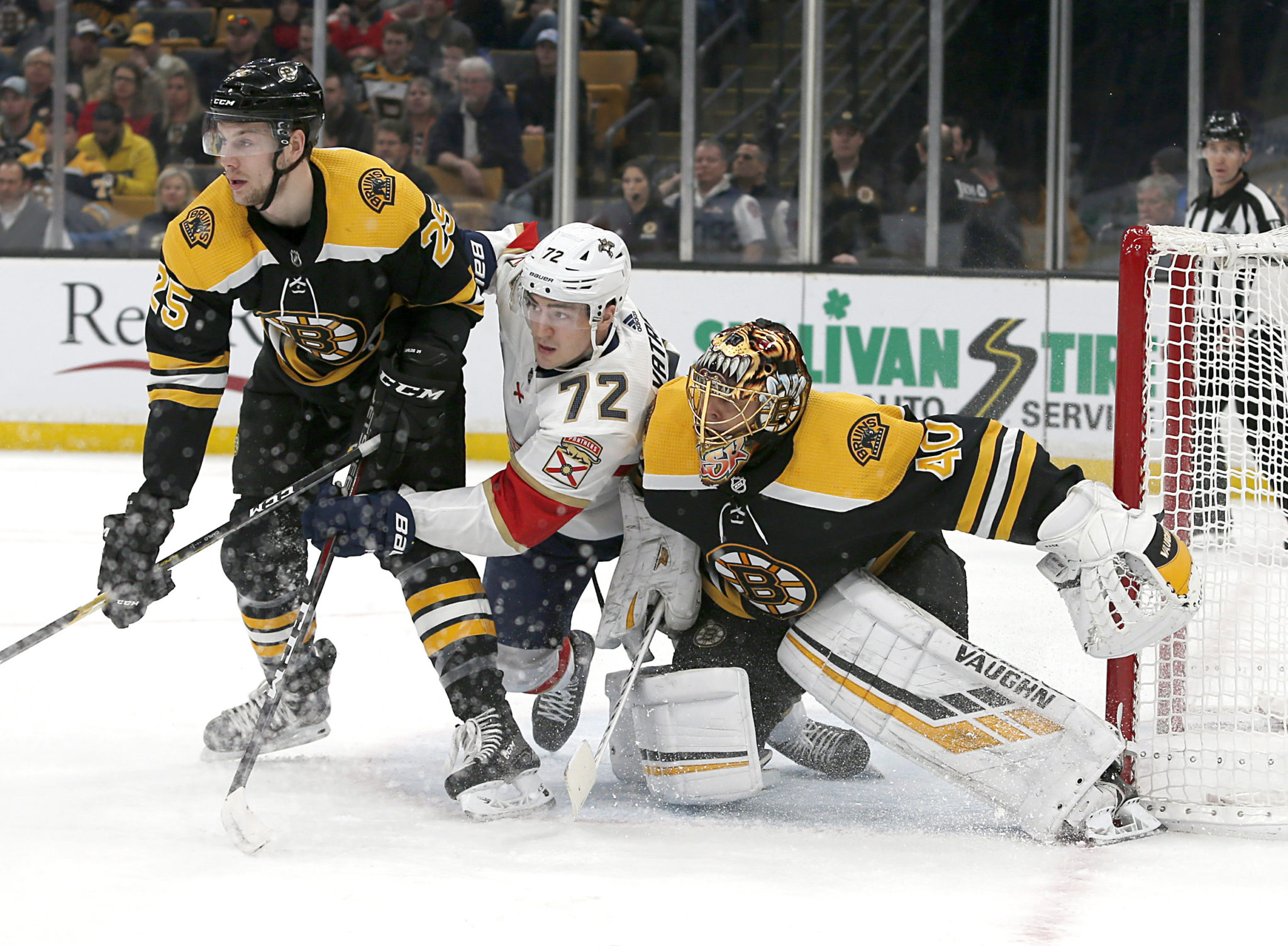 BOSTON — Patrice Bergeron scored twice, including the winner with 7.2 seconds remaining as the Boston Bruins scored twice in the final minute to beat the Florida Panthers 4-3 Thursday night, pushing their points streak to 18 games.

Brad Marchand won a battle in the corner and shuffled the puck to Bergeron, who fired a wrist shot from the left circle past screened Panthers goalie Roberto Luongo to cap the Bruins’ improbable comeback.

David Krejci and Matt Grzelcyk also scored for the Bruins, who are 14-0-4 during their points streak. It matched its second-longest points streak in team history after a similar run last season and 15-0-3 mark in the 1940-41 season. Tuukka Rask made 22 saves to extend his personal points streak to 18 games (15-0-3).

Jonathan Huberdeau scored twice and Aleksander Barkov also had a goal for the Panthers, who lost their sixth straight (0-2-4). Luongo finished with 24 saves.

Boston fell behind 3-2 with 9:08 remaining when Huberdeau charged into the Bruins’ zone and skated around Zdeno Chara before executing a nifty spin move in the right circle and slinging the puck past Rask for his second goal of the night.

Grzelcyk pulled Boston even on his one-timer near the blue line with 36.5 seconds to play before Bergeron won it.

The Panthers grabbed a 2-0 lead with a pair of power-play goals early in the second.

Less than 30 seconds after Brandon Carlo was whistled for tripping, Barkov tipped in Keith Yandle’s straightaway shot after Huberdeau corralled the puck along the boards and set him up to make it 1-0 at 2:48. It was Barkov’s 29th goal, moving him one behind team leader Mike Hoffman.

Huberdeau batted a puck out of midair in the slot for Florida’s second tally nearly four minutes later and 30 seconds into Chara’s delay of game penalty. The goal was upheld after a brief review for high-sticking.

Krejci polished off a give-and-go for Boston with 9:31 left in the second. The Bruins’ alternate captain struggled to get a handle on Danton Heinen’s return feed through the slot, but still got enough on the shot to beat a sprawling Luongo.

Boston capitalized on a Panthers giveaway for a short-handed goal as Bergeron scored on a wrister behind the left circle with 11:10 remaining to tie it at 2.

NOTES: Florida beat Boston 5-0 at home in their first meeting this season Dec. 4. … With two points, Barkov joined Olli Jokinen and Pavel Bure as the only players in Panthers history to record consecutive 70-point seasons. … Yandle played in his 782nd consecutive game, tops among active players. … Bruins LW Jake DeBrusk was scratched with a lower-body injury, forcing the team to recall C Karson Kuhlman from Providence of the AHL on an emergency basis. DeBrusk assisted on Krejci’s OT winner Tuesday against Carolina. … Boston C Sean Kuraly returned after missing two games with a concussion. … Bruins LW Marcus Johansson will be re-evaluated in a week after being hospitalized with a lung contusion he suffered against the Hurricanes. … Florida concludes its 15th back-to-back of the season Friday against Minnesota. The Panthers are 7-3-4 in the second game of back-to-backs in 2018-19.