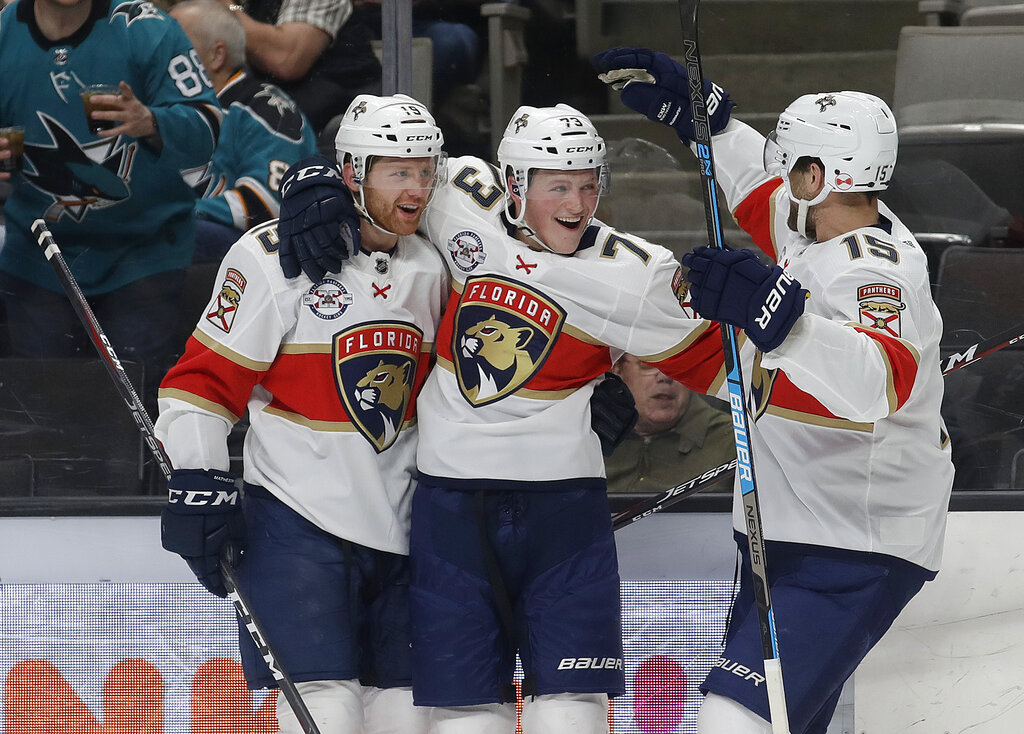 SAN JOSE, California — Martin Jones could come up with only so many saves against the NHL’s second-ranked power play before the Florida Panthers finally broke through.

Mike Hoffman scored a tiebreaking goal after San Jose was penalized for too many men on the ice late in the second period, and the Panthers denied the Sharks a chance to clinch a playoff berth with a 4-2 victory Thursday night.

“You give any team that many power plays, they’ll probably score one eventually,” Hoffman said. “We were able to get one.”

Hoffman also set up Frank Vatrano’s insurance goal in the third to send the Panthers to their third straight win following a six-game skid. Jamie McGinn and Dryden Hunt also scored for the Panthers, and rookie Sam Montembeault made 26 saves to win his first career road start.

Florida moved within seven points of Columbus for the final Eastern Conference playoff spot but has just 12 games left to make up that margin.

“We’re not out of it yet. We know it’s a long way to get there but we’re concentrating on winning every game,” coach Bob Boughner said. “We’re not giving up to the end. We’re going to fight. It’s too bad we’re in this position, obviously first half of the season, that’s why. Since January we’ve been a good hockey team and we’ll try to continue to do that.”

Melker Karlsson and Kevin Labanc scored for the Sharks, who had their six-game winning streak snapped. San Jose looked tired playing for the third time in four nights and missed an opportunity to become the first team in the Western Conference to clinch a postseason slot.

More importantly, the Sharks failed to increase their one-point lead over second-place Calgary in the Pacific Division race. The Flames have one game in hand.

“Way too many penalties tonight,” Logan Couture said. “They have a good power play and they made us pay. And we were sloppy on the PK, too. We didn’t look good. We looked slow. The energy level I’m sure looked low and we have to find a way to play better than that.”

Jones made 23 saves in San Jose’s second regulation loss at home since Dec. 20.

The Panthers took control of the game in the second period when they scored twice for a 3-2 lead. They tied it early in the period when Riley Sheahan won a faceoff just outside the offensive zone to Troy Brouwer, who fed Hunt for his second goal in two games after scoring none through the first 32 of his career.

Florida kept up the pressure from there but Jones managed to turn away several chances with the Sharks short-handed for more than three minutes after a double-minor to Couture.

But the Panthers then capitalized on a bad line change late in the period that led to a penalty for too many men on the ice. Keith Yandle passed the puck to Hoffman, who beat Jones with a slap shot from the top of the circle for his 32nd goal of the season.

Hoffman was a member of the Sharks for a few hours back in June when he was acquired by San Jose in a deal from Ottawa before being almost immediately shipped to the Panthers in a move that helped create the salary cap room that eventually brought Erik Karlsson to San Jose. Fans even displayed a mock retired Sharks banner for Hoffman.

“I appreciate the respect from the fans there,” Hoffman said. “I’ll try to reach out and contact the fan to get that from him.”

Vatrano’s goal midway through the third gave the Panthers a cushion and capped his happy 25th birthday.

NOTES: Florida has won seven of eight in San Jose. … Sharks D Radim Simek will need surgery to repair a torn ACL and MCL in his right knee. … San Jose forward Evander Kane remains sidelined for personal reasons. He said Thursday that he and his wife recently lost a child during pregnancy.