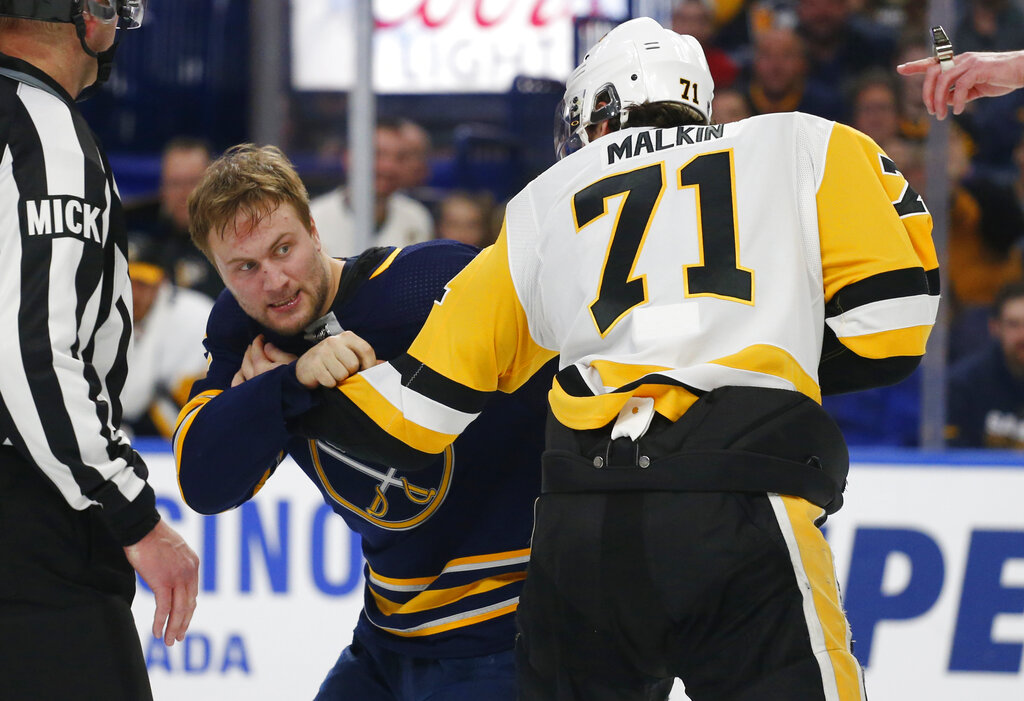 BUFFALO, N.Y. — With Sidney Crosby at the very top of his game, the Pittsburgh Penguins are peaking at the right time.

Crosby contributed two assists and Phil Kessel had a goal and an assist to lead the Penguins to a 5-0 win over the Buffalo Sabres on Thursday night. Pittsburgh had three goals on the power play, dominating with the man advantage.

Brian Dumoulin, Patric Hornqvist, Nick Bjugstad and Jake Guentzel also scored for the Penguins, who have won six of seven and sit third in the Metropolitan Division.

Crosby helped open the scoring with a highlight-reel pass 6:40 into the second period. With Guentzel stationed in front of the Buffalo net, Guentzel fed Crosby inside the right circle. Crosby then fired cross-ice to Kessel inside the left circle, and he had an open net for his 24th goal of the season.

Crosby has 19 points in his last 10 games and he continued his dominant play against the Sabres. For his career, the star center has 61 points (20 goals, 41 assists) in 39 games versus Buffalo.

“I find myself saying the same thing — he’s just such a great player, he’s such an accomplished player,” Pittsburgh coach Mike Sullivan said. “This is his favorite time of year and he’s shown an ability to elevate his game when the stakes are the highest, and he plays his best on the biggest stage and he’s done it time and time again. It doesn’t surprise me that he’s at the top of his game.

“He’s such a big part of this team and the success that it’s had over the years and we rely on him so much.”

Casey DeSmith, making his first start since Feb. 21, made 26 saves for his fourth career shutout.

“The team’s been playing awesome, obviously, and then they didn’t do anything different tonight,” DeSmith said. “They were great again. It was definitely a team shutout, team win.”

On the other end of the spectrum, the Sabres reached yet another low in what has become another trying campaign. Buffalo matched a franchise record with three consecutive shutout losses. It happened for the first time last season during a three-game stretch that concluded with a 4-0 loss to Pittsburgh. The Sabres lost 2-0 at home to Dallas on Tuesday following a 3-0 defeat in Colorado on Saturday.

“Any time that you put on an NHL sweater, you put on the Sabres sweater, you better play with some pride. Otherwise you shouldn’t … be here,” said Sabres forward Kyle Okposo, punctuating his frustration with a profanity. “I don’t believe that we’ve lost that. And if guys have, they shouldn’t be here. I don’t know what else to say.”

“We have our opportunities to tie the game up, get it within one on power plays, and that’s just where we’re at right now as a team,” Buffalo coach Phil Housley said. “We’re squeezing it.”

Dumoulin made it 2-0 with 4:53 remaining in the second. Evgeni Malkin neatly curled behind the Buffalo net before spotting Dumoulin creeping up ice. His wrist shot beat Hutton to the glove side.

“Just a great pass by Geno,” Dumoulin said. “He found me coming down to the slot. He’s such a great player, put it in my wheelhouse.”

Another power-play goal gave Pittsburgh a 3-0 lead before the end of the second. A deflected pass from Kessel found Hornqvist in front, and the veteran buried a backhand for his 17th goal of the season.

“I think when we’re playing our best hockey it’s really hard to stop us out there. We move the puck really quick,” Hornqvist said of Pittsburgh’s power play. “When those kind of players get that kind of time, that’s when they can do that and right now it’s clicking for us.”

Bjugstad made it 4-0 following a bad turnover by Sabres defenseman Matt Hunwick midway through the third period.

Penguins: Home against Philadelphia on Sunday.

Sabres: At the Carolina Hurricanes on Saturday.