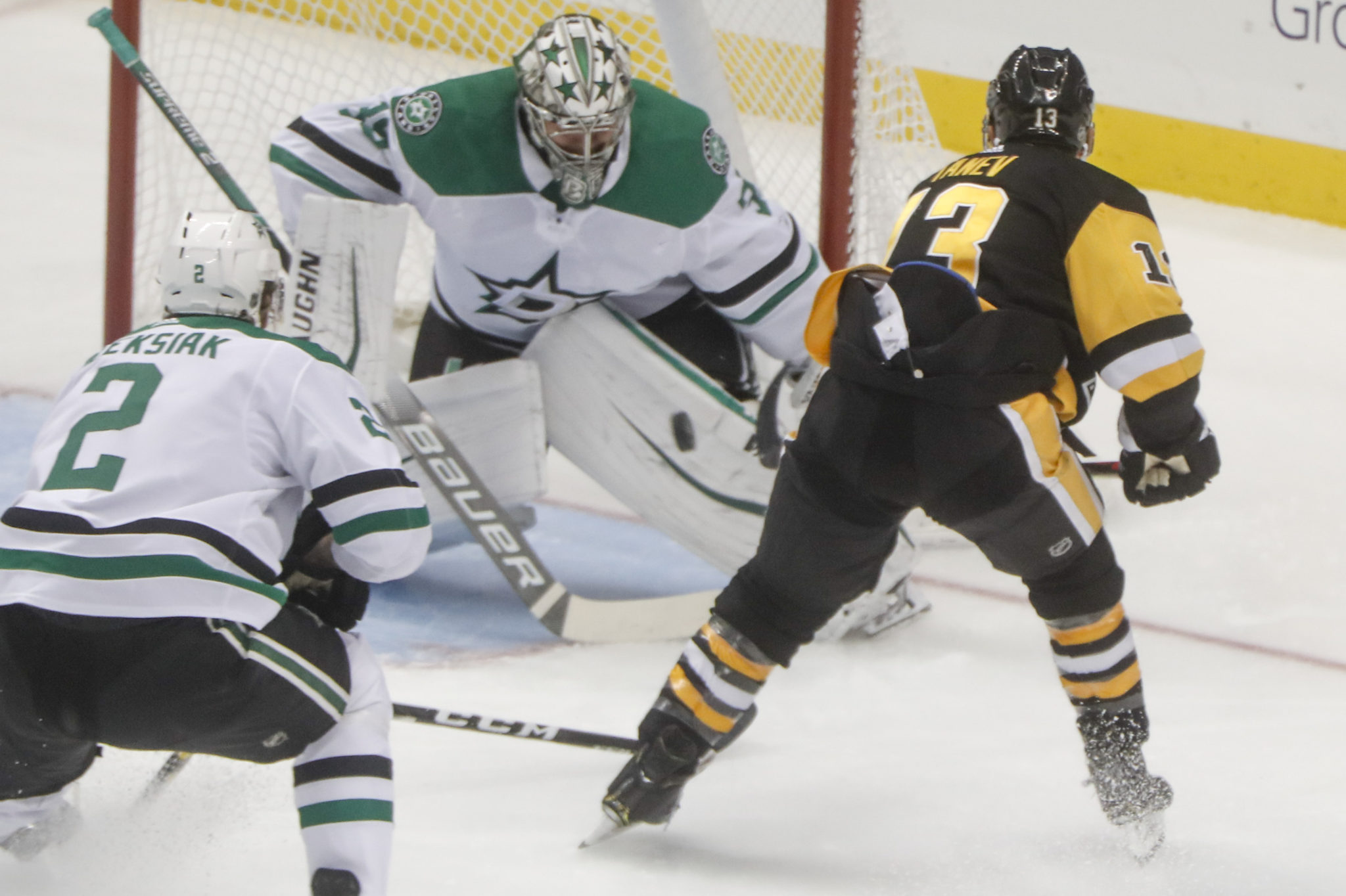 The Pittsburgh Penguins spent the offseason talking about the need to build a new identity, one predicated less on flash and more on fundamentals. The early returns are promising, no matter who happens to be on the bench on a given night.

Kris Letang scored twice in the third period, including a beautiful flip from in close after dangling past a pair of sprawled Dallas Stars, to lead the undermanned Penguins to a 4-2 victory on Friday that extended their winning streak to five. Patric Hornqvist and Jared McCann also scored for Pittsburgh and Matt Murray stopped 22 shots as the Penguins stayed hot even without a handful of forwards, including star center Evgeni Malkin.

Pittsburgh has done it by relying on solid goaltending and avoiding the kind of sloppy mistakes that hurt last season’s team at times, most notably during a four-game sweep at the hands of the New York Islanders in the opening round of the playoffs. The absence of Malkin, Alex Galchenyuk, Bryan Rust and Nick Bjugstad has limited the team’s offensive firepower. Yet the Penguins have made up for it by playing responsibly.

“This is the identity that we envisioned when we put this group of players together,” Pittsburgh coach Mike Sullivan said. “It’s a north-south game. It’s a speed game. It’s puck support in all three zones and it’s attention to detail. … Regardless of who is in the lineup, if we play this way, we feel like we can play with anyone.”


Matt Murray made 22 saves behind a defense that kept the struggling Stars in check for long stretches. A pair of point-blank stops on Seguin in the second period kept Pittsburgh within a goal and when the Penguins got rolling late, the Stars simply couldn’t keep up.

Roope Hintz scored his fifth goal for Dallas, and John Klingberg’s first of the season — a shot through a screen — beat Murray with 7:59 remaining to get Dallas within one, but the Stars dropped to 1-7-1, with six of the losses coming by two goals or less. Anton Khudobin stopped 29 shots but was once again undone by a lack of support.

“It is better, but at the same time, I think we’re not angry enough,” Khudobin said. “That’s what I think. I think we played the first two periods really good. We outhit them. Maybe we didn’t outshoot them, but we outhit them. Played pretty good hockey. Something went wrong. That second goal, my goal, definitely. What else can you say? We just got another L. I don’t know. We just have to keep going and do something?”

Letang’s go-ahead goal was a reminder of his sublime skill. He collected a loose puck near the top of the left circle, deked past Joe Pavelski, then dropped Tyler Seguin with another fake before sneaking it by Khudobin 6:34 into the third to give Pittsburgh the lead.

“It’s just instinct when you get that close to the net and try to pick the right time to shoot or make a play,” said Letang, who added an empty-netter in the final seconds to give him four goals in games after collecting just 16 all of last season. “I wasn’t expecting the other one (Seguin) to go down, but it just happened that way.”


Hornqvist doubled the advantage with 9:40 to go when he stood in the slot and deflected a point shot by Dominik Simon for his third goal. Klingberg’s goal gave the Stars some hope, but Dallas again struggled to find the net. The Stars hit three posts on the night and are now 1 for 25 on the power play after failing to record a single shot during their lone chance with the man advantage on Friday.

Hintz gave the Stars the lead 5:10 into the second period when he took a feed from Jamie Benn at center ice, streaked past Pittsburgh’s Brandon Tanev and Jack Johnson and beat Murray between the legs. The goal provided Dallas with brief jolt but the Stars couldn’t sustain it.

Dallas coach Jim Montgomery said his team’s malaise has been difficult to shake.

“Ultimately, if there’s a puck between you and I, I’d bite your leg off to get it,” Montgomery said. “That’s the attitude you have to have. Anton had that competitive spirit tonight that we need to permeate throughout our lineup.”

Stars: Wrap up a four-game trip on Saturday in Philadelphia. The teams split their two meetings last year, each winning on home ice.

Penguins: Host former teammate Marc-Andre Fleury and the Vegas Golden Knights on Saturday. Fleury is 2-1 with a 3.02 goals-against average versus the team he helped win Stanley Cups in 2009, 2016 and 2017.