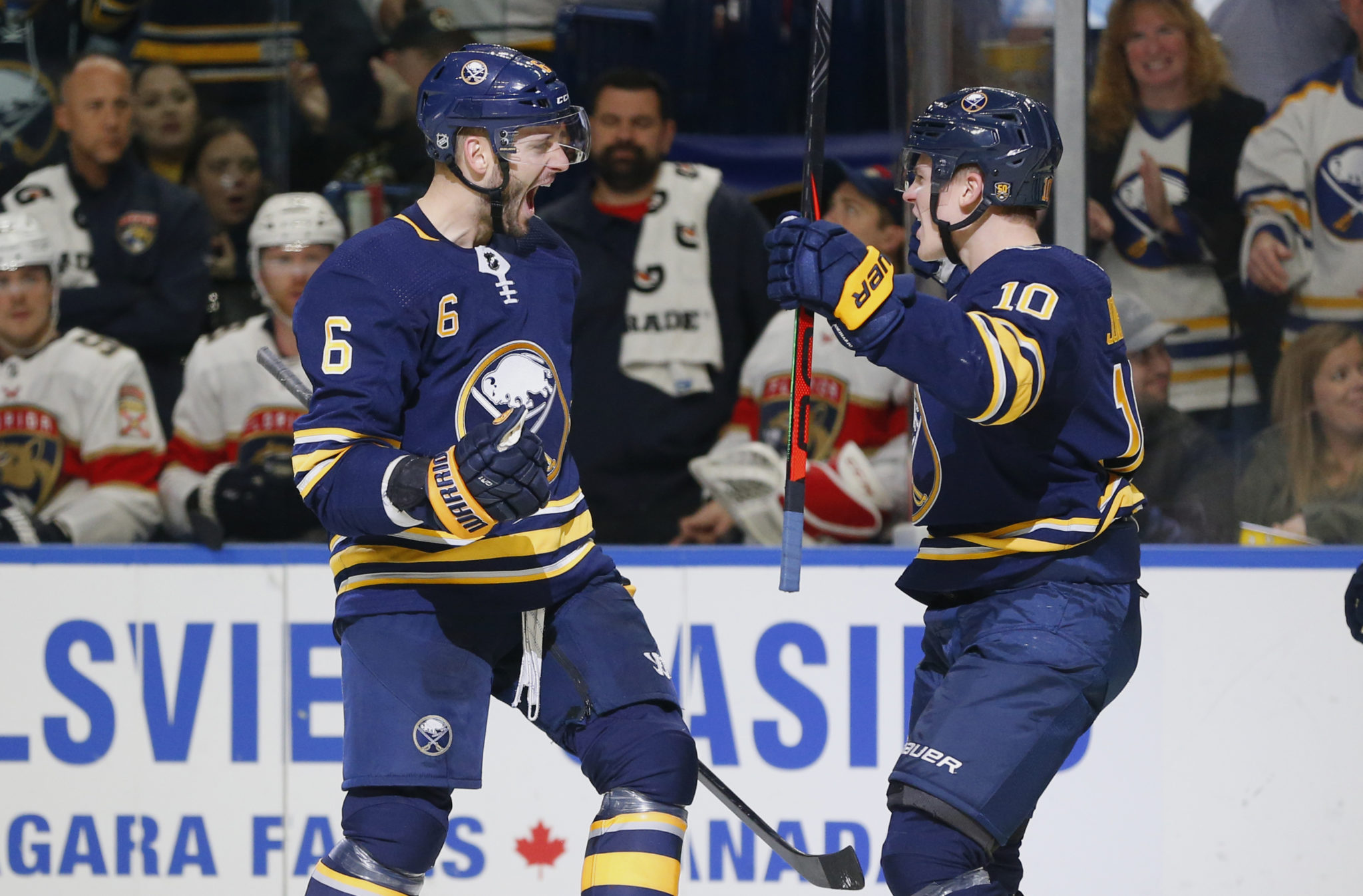 On a night the Buffalo Sabres’ top scorers were held in check, Kyle Okposo and his line of grinders came to the rescue.

Okposo set up both goals in regulation before Jack Eichel and Casey Mittelstadt scored in the shootout to help Buffalo match its best start to a season in 10 years with a 3-2 win over the Florida Panthers on Friday night.

“I’ve never seen a bench cheer so much for another line having success,” coach Ralph Krueger said of how his so-called energy line scored goals 2:33 apart spanning the second intermission to stake Buffalo to a 2-0 lead. “To see all that hard work, the grinding they’ve been doing the first five games paying off was so big tonight.”

It might have been even more satisfying had the Sabres not squandered a two-goal, third-period lead for a second consecutive game. Buffalo blew a 4-2 lead in an eventual 5-4 overtime win over Montreal on Wednesday.


“We just sat back a little bit,” said Okposo, who had the primary assists on goals scored by Johan Larsson and defenseman Marco Scandella. “We just have to find a way to continue to play our game and continue to stay aggressive.”

Zemgus Girgensons also had two assists on a night Buffalo’s potent power play finished 0 for 4. Linus Ullmark finished with 41 saves, with two more in the shootout.

Buffalo improved to 4-0-1 and opened with three straight home wins for the first time since 2008-09.

Mike Hoffman forced overtime by scoring with 11 seconds left. Left open in the right circle, he waited patiently before snapping a shot over Ullmark’s left shoulder. Evgenii Dadonov had a goal and assist, and Jonathan Huberdeau had two assists for Florida (1-2-1).

Much of the credit goes to goalie Sergei Bobrovsky, who made 30 saves, including several in the final 1:45 of overtime.

First he lunged up to get a piece of Eichel’s shot on a breakaway. Then, Bobrovsky kicked out his left pad to stop Mittelstadt, who was set up at the right post.

“It’s a huge point for us,” Bobrovsky said. “Obviously, we could clean up some things, but I thought the boys stepped up and showed character.”

Bobrovsky was coming off a 6-3 loss to Carolina on Tuesday, when he was yanked after allowing four goals on 14 shots through the first period.


Eichel scored on Buffalo’s first shootout attempt by banking in a shot off the right post. After Florida’s Vincent Trocheck and Aleksander Barkov failed on their attempts, Mittelstadt sealed the victory by backhanding a shot inside the crossbar.

Ullmark was impressed by how the Sabres didn’t let up after surrendering the lead.

“We never hesitated. We stayed calm on the bench. No one got upset or anything like that,” he said.

And he blamed himself for allowing Hoffman’s goal, which came with Bobrovsky pulled for an extra attacker.

“I should’ve had that. He’s known to go top glove,” said Ullmark, who stopped 40 shots in a 4-3 overtime loss at Columbus on Monday night. “It’s my job to stop the puck.”

Larsson opened the scoring with 31 seconds left in the second period just as Hoffman finished serving a cross-checking penalty.

Okposo drove up the right wing and drew two defenders while entering the Panthers’ zone. Okposo then slipped a pass to an open Larsson, who roofed a shot in and then went soaring over Bobrovsky, who was a split-second late in getting across with 31 seconds left in the second period.


Scandella put Buffalo up 2-0 by jumping into the play and converting Okposo’s pass into the left circle by scoring 2:02 into the third period.

The Sabres had several point streaks come to an end, including defenseman Rasmus Dahlin’s four-gamer, in which he had a goal and six assists, and rookie forward Victor Olofsson, who combined for four goals and an assist in his first four games.

NOTES: Buffalo entered the day with 18 goals scored in first four games, the most over that same span since scoring 19 in 2007-08. … Panthers remain the NHL’s only team to not have scored a goal in the first period this season. … Panthers C Denis Malgin returned to the lineup after sitting out two games and replaced Henrik Borgstrom.