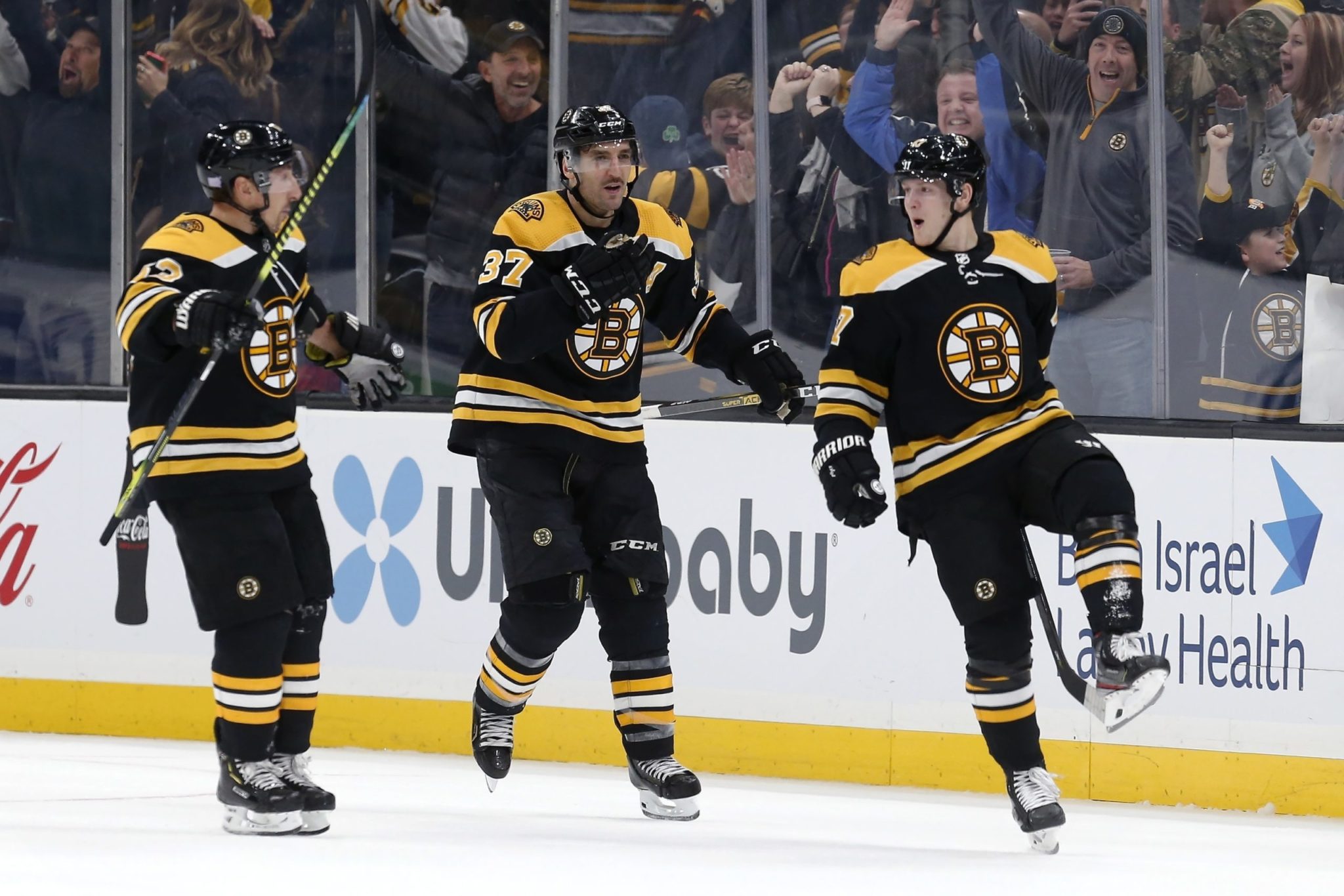 It was only fitting the Boston Bruins got their first overtime win of the season after a comeback like that.

Torey Krug scored 2:41 into OT after David Krejci had two goals in the final two minutes of regulation, rallying the Bruins to a 5-4 win over the Minnesota Wild on Saturday night.

The Bruins were 0-5 in extra time this season, losing once in OT and four times in the shootout.

“Might as well go down swinging if you’re going to a shootout,” Krug said, joking. “That’s not our thought process, but looking at it you might as well think that way. We were in attack mode a little bit more.”


Jake DeBrusk and Brad Marchand also scored to help Boston pick up at least a point for the seventh straight game (4-0-3). Tuukka Rask finished with 32 saves in place of backup Jaroslav Halak, who was scheduled to start.

“We fought through,” Marchand said. “It’s not always going to be pretty. You’re not going to have your best every night, but we’re finding ways to win games.”

Rask stopped Jason Zucker on a breakaway with about three minutes to play in regulation and made a stop with the toe of his skate nearly doing the splits off a deflected shot in OT before Krug’s game-winner.

“We had our chances to put the game away,” Zucker said. “I’ve got to score on that. That’s three goals up.”

Victor Rask, Eric Staal, Kevin Fiala and Zucker scored for the Wild, who were on the verge of sending Boston to its first regulation loss at home this season but fell to 3-0-2 in their last five games. Alex Stalock had 34 saves.

The Bruins remained the only NHL team yet to lose in regulation at home (9-0-4).

“Sometimes coaches take it a little harder than players. I’ll get over it tomorrow,” Wild coach Bruce Boudreau said. “We played a team that’s played 12 games in their building and hadn’t had a regulation loss. Arguably the best team in the league and we played them shot-for-shot, hit-for-hit until the last five minutes. Once they got that feeling it was hard to stop them.”

Krug cut between a pair of Minnesota players and slipped a shot between Stalock’s pads for the winner.

“In overtime, I don’t know what we were thinking,” Boudreau said.


Trailing 4-2, Boston started its improbable comeback when Krejci scored his first with Tuukka Rask off for an extra skater with 1:55 to play. Then, with Luke Kunin off for tripping and Rask pulled again, Krejci one-timed Patrice Bergeron’s pass by Stalock from the left circle with 1:07 left in regulation.

Trailing 1-0, Boston tied it when DeBrusk, cutting across in front of the crease, tipped Zdeno Chara’s shot into the net at 4:14 of the second.

Minnesota moved back ahead exactly two minutes later on Victor Rask’s second of the season. Skating in hard for the rebound of Jared Spurgeon’s shot from the point, the puck went into the net off the center’s right skate as he collided with Boston defenseman Steven Kampfer.

With Chara off on a double minor for high sticking, Staal chopped a rebound into the net from the edge of the crease, making it 3-1.

Marchand shoveled a short shot by Stalock with 3.1 seconds left in the second.

Fiala was credited with a goal when the puck went into the net off Boston defenseman Krug’s stick, making it 4-2 at 5:19 of the third.

Minnesota opened the scoring at 8:53 of the first when Zucker, positioned just outside the crease, scored on a backhander off the rebound of Brad Hunt’s shot from the right point 7 seconds into a power play.

As Boston defenseman Charlie McAvoy’s penalty expired later into the period, he jumped onto the ice and joined in to make a 2-on-none break with Marchand, who fed the puck over, but Stalock came across the crease to rob him. McAvoy, still looking for his first goal this season, also charged in for a loose puck early in the third but fired it over the net on a shot that would have tied it.