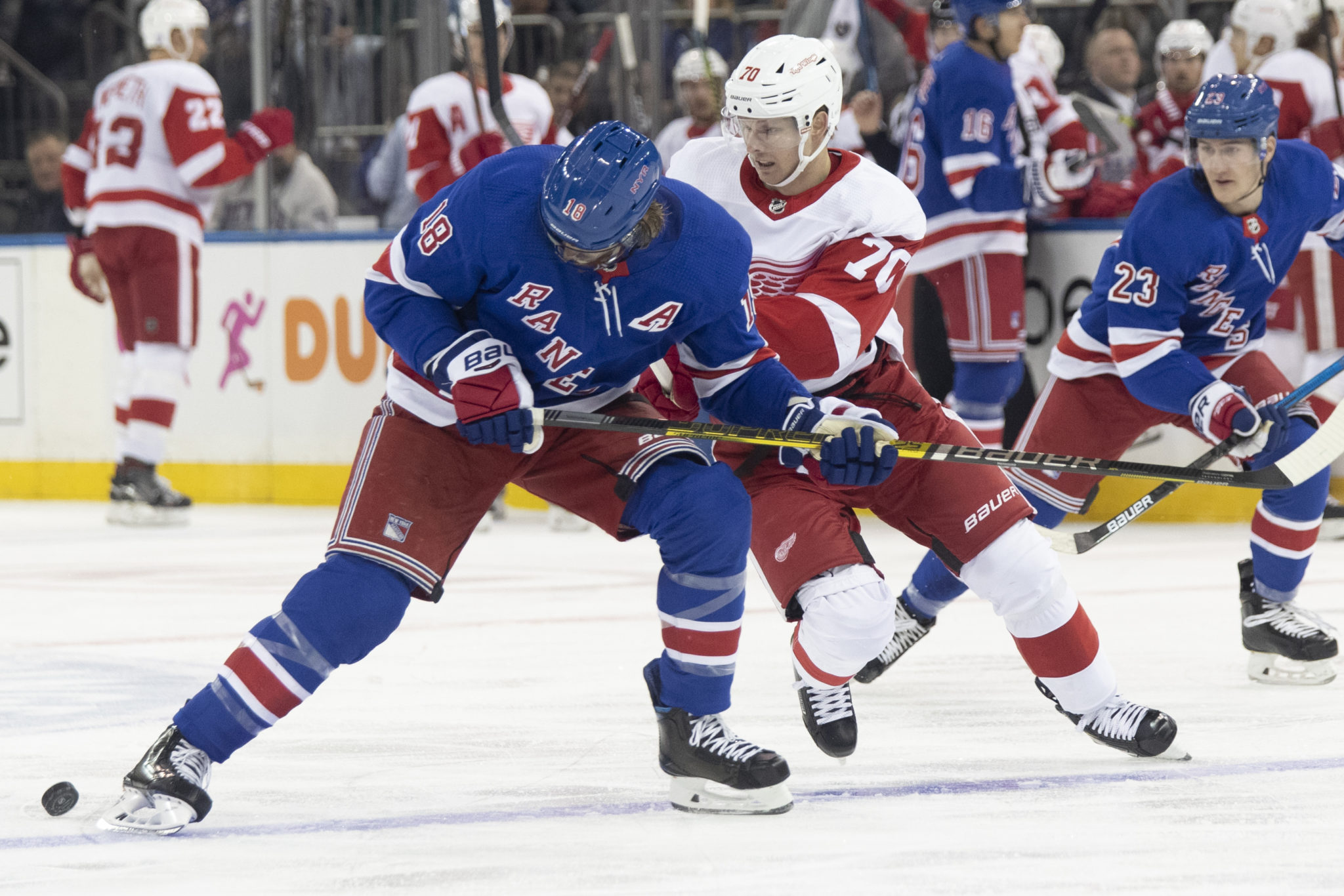 Tony DeAngelo had a goal and an assist in New York’s three-goal second period, Henrik Lundqvist stopped 35 shots during his first start in 10 days, and the Rangers beat the struggling Detroit Red Wings 5-1 Wednesday night.

Artemi Panarin and Ryan Strome also had a goal and an assist apiece, and Chris Kreider and Greg McKegg scored to help New York win for the fourth time in six games. Lundqvist, after sitting out the previous three games, made 24 saves over the final 28:06.

Valtteri Filppula scored and Jimmy Howard finished with 26 saves, but the Red Wings’ fourth straight loss dropped them to 1-11-1 in their last 13 games. Detroit won the previous five meetings with the Rangers.

Trailing 3-1 in the second, the Red Wings picked up the pressure. They outshot the Rangers 15-3 over a 16½-minute stretch, but couldn’t beat Lundqvist.


McKegg then pushed the lead to 4-1 at 8:44 of the third with his first goal for the Rangers on their third shot of the period. With the Red Wings on a power play, McKegg brought the puck up the left side and sent a shot that went off the shaft of Howard’s stick. With the goalie unaware where the puck was as it lay in front, McKegg skated in and quickly put it in for New York’s third short-handed score of the season.

Panarin added an empty-netter with 2:37 left for his seventh goal and 14th point, both team highs.

After a scoreless first period, the Rangers took control with three goals in the first 8:49 of the second — including two on their first three shots.

DeAngelo got New York on the board with a power-play goal with one second remaining on a holding penalty to Adam Erne. Brendan Lemieux took a pass from Pavel Buchnevich on the right doorstep, and his shot rebounded off Howard’s pad to the left to DeAngelo, who quickly put it in for his sixth at 4:25.

Kreider made it 2-0 as he got a cross-ice pass from Buchnevich and beat Howard up high on the glove side from the right side for his third at 6:04.

The Rangers made it 3-0 with their second power-play goal of the period as Adam Fox’s shot deflected off Strome’s right shoulder and past Howard at 8:49. Strome, who had a six-game point streak snapped in New York’s 6-2 loss to Ottawa on Monday night, got his fifth goal and 10th point in the last eight games.

Just 52 seconds later, Athanasiou got past Rangers defenseman Jacob Trouba on the left side for a 2-on-0 rush, cut in toward the net and passed to the right to Filppula, who put the puck past Lundqvist to pull the Red Wings to 3-1.

Vin A. Cherwoo is a reporter for The Associated Press.