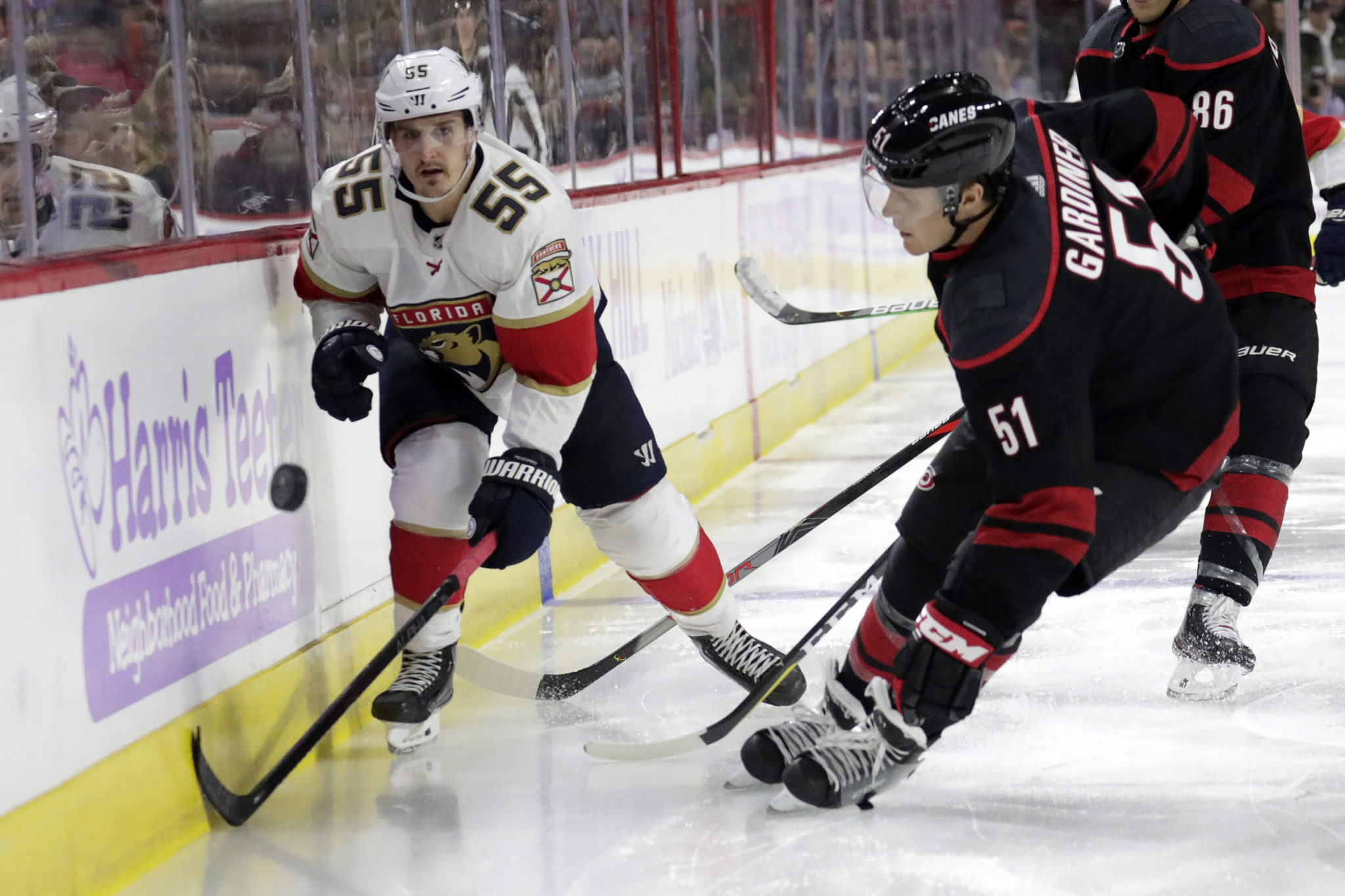 It was another big night of offense for Carolina’s defensemen.

Dougie Hamilton sparked the Hurricanes’ high-scoring defensive unit with a goal and an assist to help Carolina beat the Florida Panthers 4-2 on Saturday.

The Hurricanes encourage their defensemen to contribute on offense as much as any team in the NHL, and it paid off against Florida. Carolina, which entered leading the league with 18 goals by defensemen, got two more as Brett Pesce delivered the Hurricanes’ first score and Hamilton broke a 2-all tie off a feed from Teuvo Teravainen with 2:15 remaining in the second period.

“For whatever reason, we’ve been getting good contributions from our defense,” coach Rod Brind’Amour said. “I’ve said it all along, and any coach will tell you, it’s five-man units out there, the way we play for sure, on the forecheck and when you’re coming back. So they’re big parts of the offense, and of course the defense.”


Hamilton also assisted on Martin Necas’ goal, Andrei Svechnikov added an empty-netter and Petr Mrazek stopped 21 shots for the Hurricanes (14-8-1), who won for the fifth time in six games. Svechnikov also had an assist, and Teravainen contributed three assists.

Aaron Ekblad and Brian Boyle scored for Florida (12-6-5), which had won three straight.

“As the game went on, the third period was their best,” Panthers coach Joel Quenneville said of the Hurricanes. “When we gave up that late one in the second period, we thought we were doing OK. … They had more of the puck, and we weren’t very good for that stretch of the game and we didn’t deserve to win tonight.”

Hamilton, who began the day leading NHL defensemen with nine goals this season, has at least one point in 18 of Carolina’s 23 games. Pesce said Hamilton’s “unbelievable” ability and Brind’Amour’s support helps the Hurricanes get the most out of their defensemen.

“Roddy just encourages us to step in, obviously, in a smart way,” Pesce said. “But he encourages us to get in the play and keep pucks in and shoot whenever we can, and we’ve been doing a pretty good job of that all year.”

Florida took advantage of a pair of defensive lapses by Carolina’s fourth line for goals 18 seconds apart in the first period. Ekblad skated in unchecked from the point to lift a backhand past Mrazek 8:36 in, and Boyle made it 2-0 when he slipped behind the defense for a goal off a feed from Colton Sceviour.


Carolina tied it at 2 before the first intermission with goals by Pesce and Necas off cross-ice feeds that originated from the blue line to the left of goalie Sergei Bobrovsky.

The Panthers entered as the NHL’s top-scoring team at 3.68 goals per game and had a 5-4-2 record when trailing after two periods. But they managed just seven shots on goal in the third as they attempted to pull off another comeback win.

Bobrovsky stopped 30 of the 33 shots he faced, but Florida was held scoreless over the final 51 minutes.

“I think we’ve got to get the puck behind them in the neutral zone,” Quenneville said. “Try to advance the puck quickly and then move it for support. … Try to activate our defense. A big answer for a stretch there was puck movement.”

Ken Tysiac is a reporter for The Associated Press.