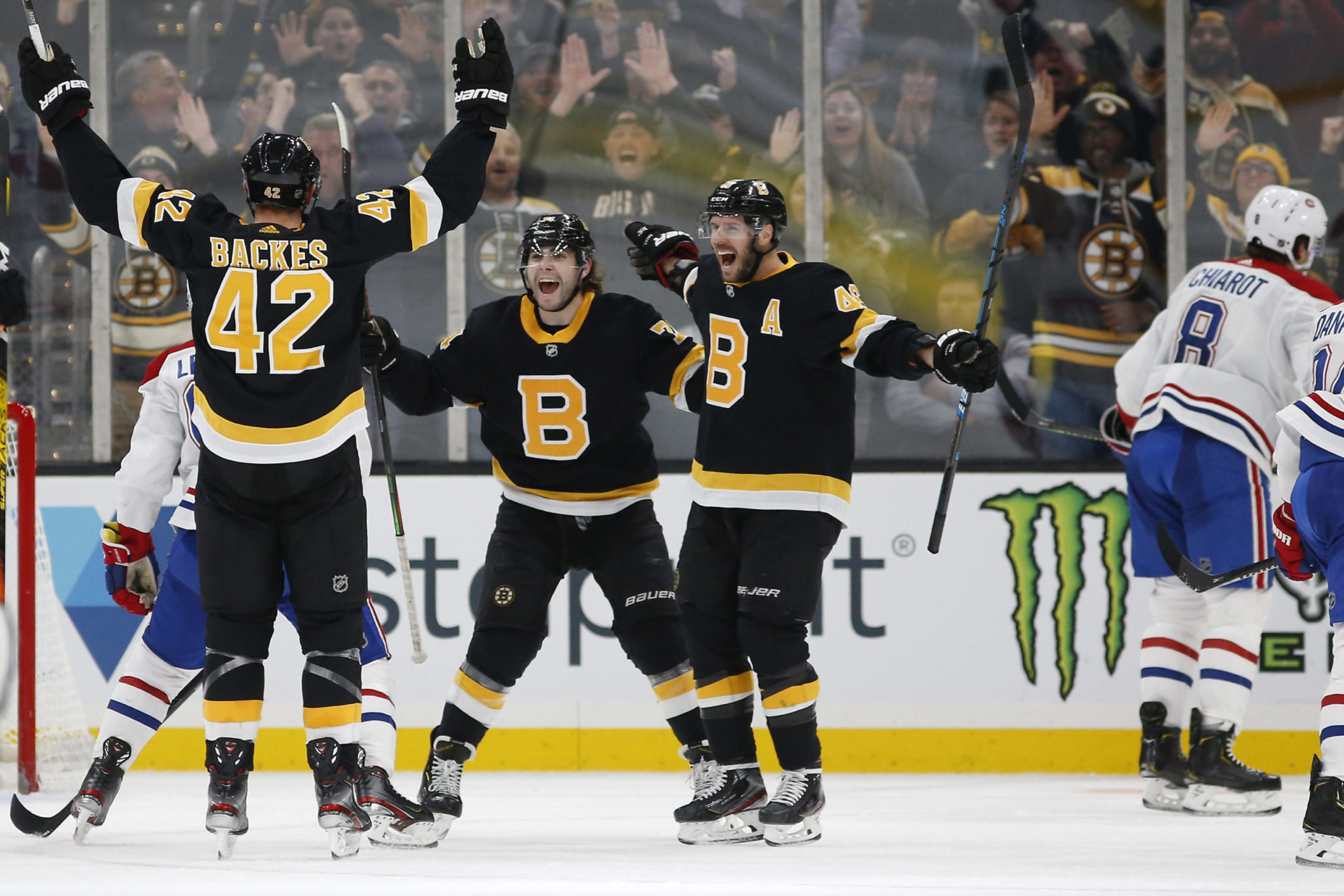 David Backes couldn’t help but smile after scoring his first goal of the season in his first game in nearly a month.

The Bruins’ alternate captain picked a big moment against a big-time rival to accomplish the feat.

“You could see (the emotion) it on my face. That was elation,” Backes said. “I’ve been watching this team do this for a month, and now it’s great to be part of it.”

Backes’ goal came off a feed from David Krejci through the right circle. Jake DeBrusk added his sixth goal of the year on a give-and-go with Charlie Coyle a couple minutes later and the Canadiens’ season-high losing streak reached eight (0-5-3).


Backes was in the lineup for the first time since being injured during a scary collision with Ottawa’s Scott Sabourin on Nov. 2.

“We didn’t know what he’d have, to be honest with you,” Bruins coach Bruce Cassidy said. “He hadn’t played in a while. I thought he gave us some good energy, had a couple looks, was banging bodies.”

Tuukka Rask made 28 saves for the Bruins.

Boston extended its point streak to 11 games (8-0-3) and entered the third month of the season as the only team without a home regulation loss (11-0-4).

Joel Armia scored, and Carey Price had 31 saves for Montreal.

“For 45, 46, 47 minutes, we were playing solid hockey,” Montreal and former Bruins coach Claude Julien said. “We needed that win desperately, and now we’ve got to go back home and find a way to win the next one.”

Montreal had allowed 24 goals in four prior games, including a season-worst 8-1 loss to Boston at home Tuesday that featured a hat trick by Pastrnak.

Price gave up five goals on 11 shots in Tuesday’s loss to the Bruins and has surrendered 19 total over his last four games.

But the Canadiens’ star saw improvement in his team’s effort.

“If we definitely play like (we did today), the majority of our games are going to be a better result,” Price said.

The Canadiens got off to a fast start this time after giving up three first-period goals in Tuesday’s matchup.


Armia’s backhand shot from the right circle deflected off Charlie McAvoy’s skate and into the net for his 10th goal of the year 1:58 into the game.

Play was stopped with 2:47 left in the second as a scuffle broke out involving all 10 position players on the ice after Shea Weber interfered with Pastrnak.

Pastrnak evened the score at 6:16 of the third after skating into the right circle and firing a one-time shot past Price high to the stick side.

“Twenty-five (goals) by December 1st, I wouldn’t have predicted that,” Cassidy said. “I know he’s certainly, maybe could have had 30. I don’t think he’s had a lot of freebies, let’s put it that way.”

“It’s unfortunate. It was a bad call,” Julien said. “Krug’s stick was stuck under his own player. As a referee in a 1-1 hockey game, you’ve got to make sure when you make those calls. I was pissed off at the way that was handled.”

The Canadiens beat the Bruins 5-4 in their first meeting on Nov. 5 in Montreal.