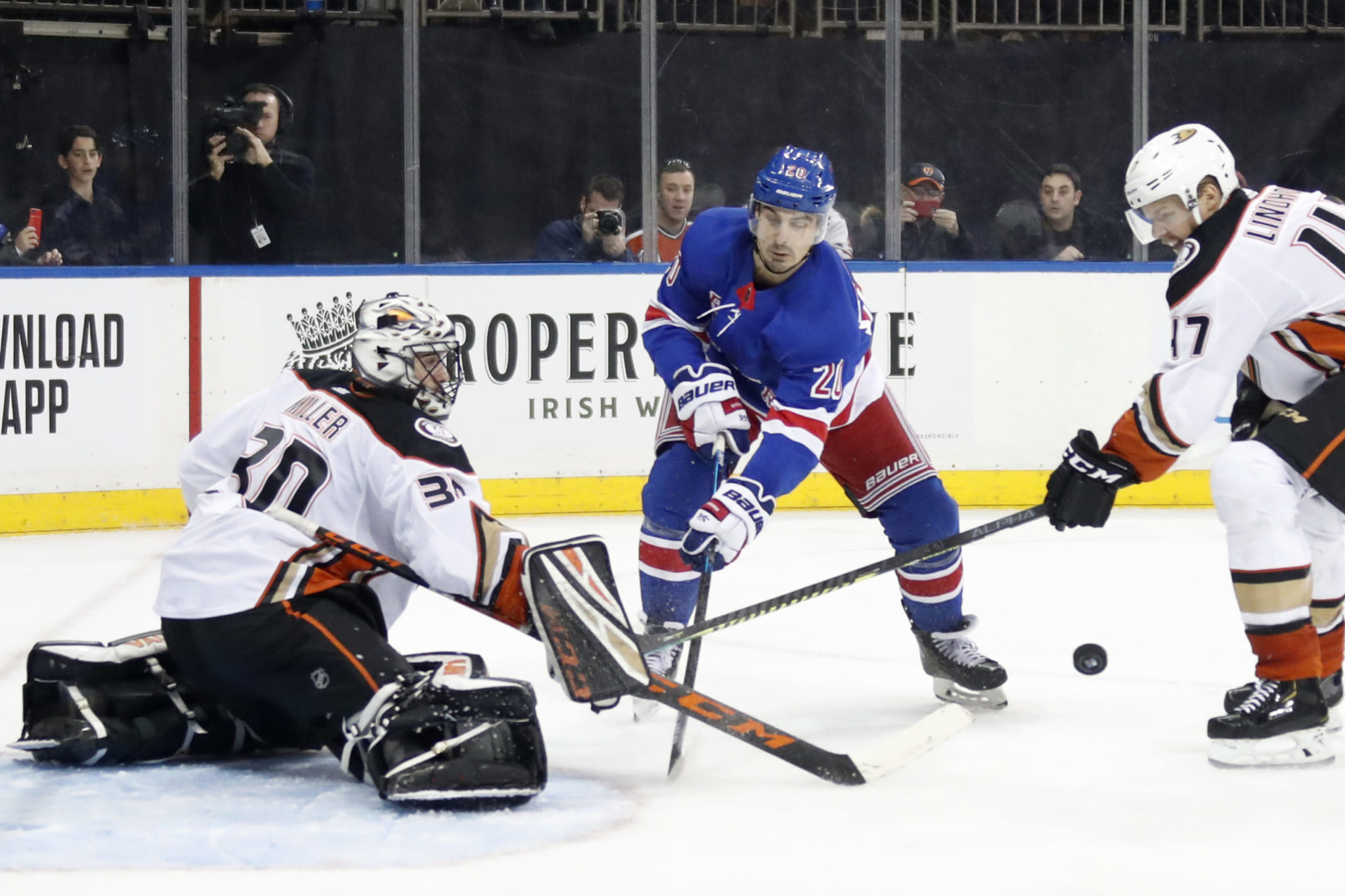 Mika Zibanejad had a goal and an assist, while Filip Chytil and Brett Howden also scored for the Rangers. Henrik Lundqvist made 19 saves.

Sam Steel scored for the Ducks and Ryan Miller made 36 saves.

When these teams faced each other last Saturday in Anaheim, the Ducks rallied from 2-0 and 3-2 down to win 4-3 in a shootout.

Defenseman Korbinian Holzer, playing out of position as a forward because of the Ducks’ depleted lineup, committed the game’s first penalty, high-sticking just 1:33 into the first period. Pavel Buchnevich had the Rangers’ best chance on the ensuing power play, but was unable to find the back of the net with a backhand.


Chytil opened the scoring for the Rangers, beating Miller with a backhand shot from the right side 7:14 into the first. Howden doubled New York’s lead just 91 seconds later, firing the rebound from Tony DeAngelo’s shot into an open net. Both Chytil (10 games) and Howden (15) ended significant goal droughts.

The Ducks pulled a goal back to make the score 2-1 just before the midpoint of the first. Ondrej Kase’s shot was saved by Lundqvist, but Steel batted the rebound out of the air into the net.

Kreider restored the Rangers’ two-goal lead a few minutes later. With the teams playing 4-on-4 after matching roughing penalties to Max Comtois and Ryan Lindgren, Kreider beat Josh Manson on a breakaway and went around Miller for his seventh point in his past seven games.

Erik Gudbranson, playing in his 500th game, was sent to the penalty box for tripping near the end of the first period, but the Rangers were again unable to convert their power play. New York finished 0-for-5 on the man advantage, leaving them without a power-play goal in four straight games.

Kreider scored his second goal of the game with just under four minutes remaining in the second period, extending the Rangers’ lead to 4-1. Zibanejad picked up an assist, extending his point streak to five games.


The game turned physical in the second period. The teams took another set of matching roughing penalties as well as a pair of unsportsmanlike conduct penalties. Gudbranson and Brendan Lemieux were both given 10-minute misconducts. Gudbranson earned his after dropping his gloves in an attempt to fight Lemieux, but at 4 inches shorter, Lemieux declined to join him. By the time the second period ended, 36 total penalty minutes had been handed out.

Zibanejad increased New York’s lead to 5-1 just over a minute into the third period, beating Miller from a tight angle during a Ducks power play. It was his third short-handed goal of the season, tying Carolina’s Sebastian Aho and Ottawa’s Jean-Gabriel Pageau for most in the NHL.

Micheal Haley and Nicolas Deslauriers dropped the gloves early in the third. Anaheim and New York entered Sunday each having taken 15 major penalties this season, tied for most in the league.

Chytil appeared to injure his knee after losing his balance and falling into the boards during the third period, but returned to the game.