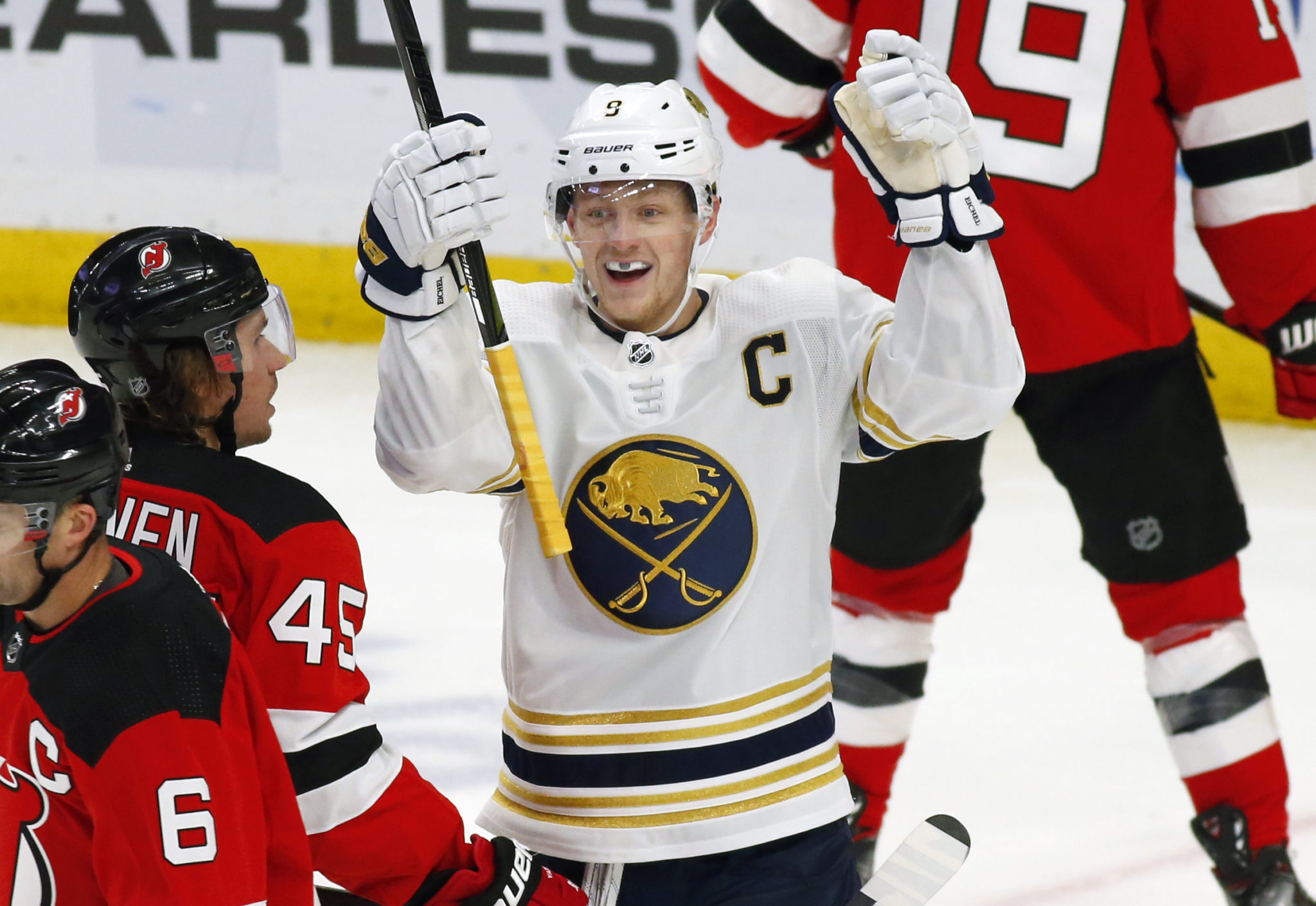 It was a day worth celebrating for the Buffalo Sabres.

On the team’s 50th birthday as a franchise, the Sabres scored five goals in the first period on their way to a 7-1 victory over the New Jersey Devils on Monday night.

It was an offensive explosion that had been a long time in the works, according to coach Ralph Krueger.

“The last six games before this really had been games of good habits, and a lot of the offense that we were starting to create hadn’t really functioned that well with goals,” Krueger said. “I thought we had a deserved first period, kind of like the fruit of the labor from the week before almost seemed to pay off. We were hot.”

“We talked about coming out hard and playing our game and I think we did,” said forward Rasmus Asplund. “But I think what we really did good was when we scored a couple goals there, we just stayed with the game plan and kept going. Five in a period, it just shows what character we have.”

The celebratory mood began before the game when the team honored original owners Seymour H. Knox III and brother Northrup R. Knox, now deceased. Members of the Knox family, including Seymour’s widow Jean, were honored with golden pucks before the game by current Sabres owners Terry and Kim Pegula. Buffalo was awarded an expansion team on Dec. 2, 1969.

Eichel got Buffalo going with his 17th of the season 2:46 into the game. Skinner made it 2-0 two minutes later off a turnover in the Devils end. Larsson forced the turnover, and Skinner buried a wrist shot for his 11th goal.


Sheary ended a 19-game goal drought on a one-timer 6:57 into the first, then added his fifth of the season with 3:19 remaining in the period on a poor effort from Devils goalie Louis Domingue. Domingue got a pad on Sheary’s shot, sending the puck high into the air before it eventually fell behind him into the net.

Asplund completed Buffalo’s first-period flurry to make it 5-0 with 58 seconds left on his first NHL goal. One day before his 22nd birthday, Asplund scored on a long shot from the bottom of the left circle.

“It’s a relief, of course,” Asplund said. “I think I’ve been playing really well the last couple games, I’m creating a lot of chances. I knew it was close and I got it.”

Domingue was pulled for New Jersey after allowing five goals on 15 shots. He was replaced by Mackenzie Blackwood, who made 15 saves.

It was hardly the effort the Devils were looking for with a difficult four-game trip around the corner. Before that, they have a quick turnaround with a home game against Vegas on Tuesday.

“I’m running out of things to say as to why we’re playing like that,” forward Taylor Hall said. “It’s hard. It’s a tough pill to swallow and it’s everyone in here. It’s too bad. We have the players in here to play a lot better than that. We’ve got to step it up.”

Nico Hischier got New Jersey on the board 8:10 into the second with a power-play goal, scoring from close range.

“First period was not close to being good enough in any area and obviously the scoreboard said it and it’s unacceptable,” Devils coach John Hynes said. “We’ve got to figure out particularly, like, tonight what went on in the first period and why we came out like that.”