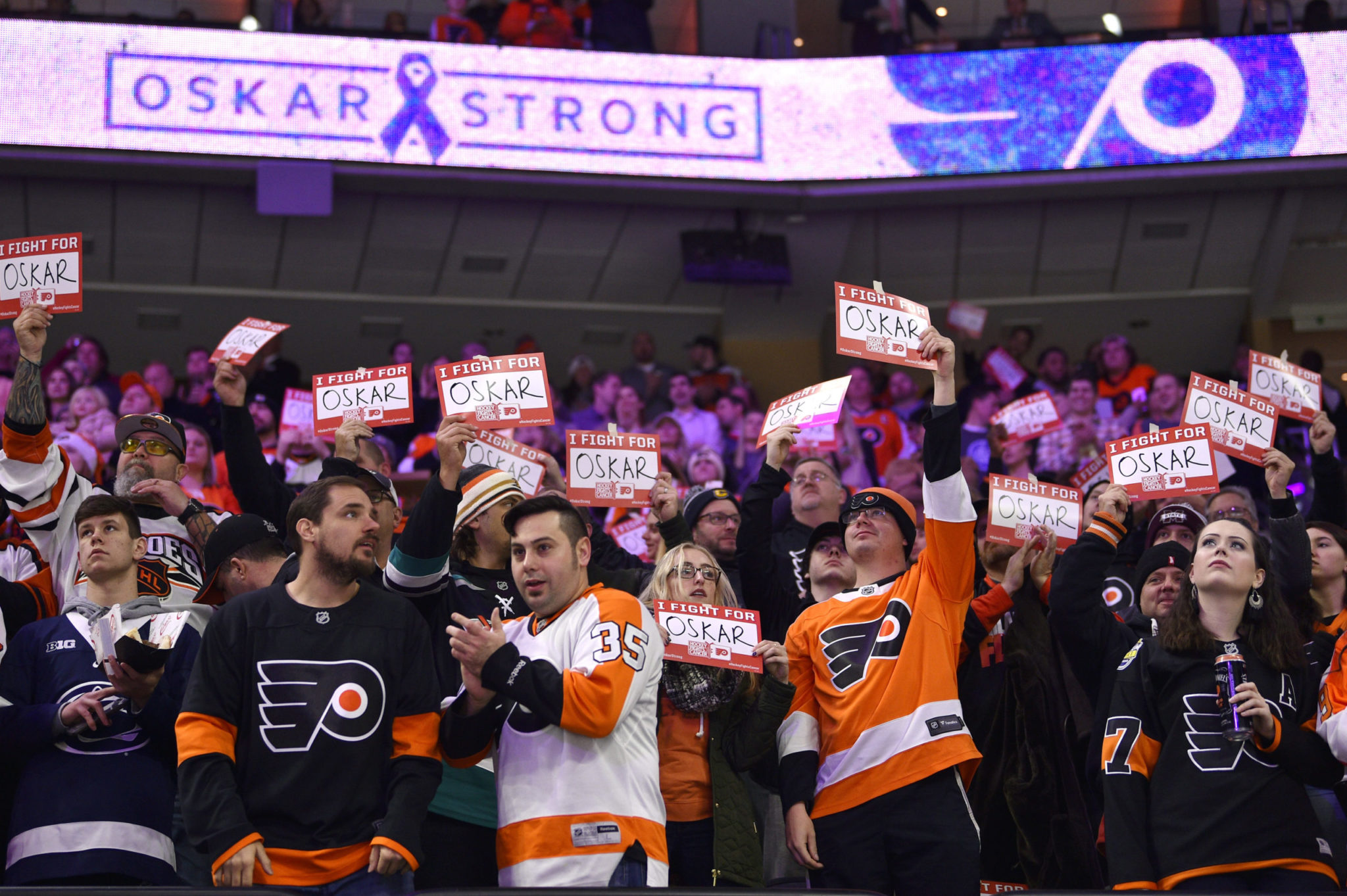 Oskar Lindblom was just a visitor in the Flyers’ locker room Tuesday, his presence enough to lift the spirits of a franchise rocked by the promising forward’s cancer fight. He was never far from his teammates thoughts, and they tapped their sticks as Flyers fans stood in support, all in his corner as he faces his murky recovery ahead.

“It’s something to play for, someone to play for, and we are alongside him in this fight and every step of the way,” goalie Carter Hart said.


The Flyers played their first home game since Lindblom was diagnosed with Ewing’s sarcoma, a cancerous tumor that grows in the bones or in the tissue around bones. The 23-year-old from Sweden, who is out for the season, stopped by the locker room during morning skate and visited his teammates.

“It was great to see him again,” Giroux said.

The Flyers warmed up in purple “Hockey Fights Cancer” jerseys and will auction them off with proceeds going to Ewing’s sarcoma research. They left “I Fight For Oskar” signs on every seat, and fans held them during a tribute video for Lindblom. Ducks and Flyers players tapped their sticks and fans stood and applauded the promising forward who had 11 goals and 18 points in 30 games this season. The Flyers sold #OskarStrong purple shirts, and proceeds from the 50/50 raffle were donated toward Ewing’s sarcoma research.

“I can just tell you it was great to see him today,” Flyers general manager Chuck Fletcher said. “His teammates care deeply about him and as an organization we’ll do whatever we can to help him. There’s some pretty good energy in the room today, and I think that’s in large part to seeing Oskar.”

The Flyers went 0-3 on a road trip where they were told of Lindblom’s health issues. Back home and inspired by their teammate, they got two quick goals from Giroux and Kase early in the second period to hold off the mediocre Ducks.

Hart had 40 saves for the Flyers in a sensational effort on a night set aside for Lindblom.

“Hockey is one big family and it is cool to see how much support he is getting not just from us, but from the fans and around the league and the world,” Hart said.


Voracek added his seventh in the third and Sean Couturier knocked in an empty-netter in the final seconds.

Rickard Rakell made it 2-1 in the second with his 10th goal.

“It was a bit of a crazy night,” Ducks coach Dallas Eakins said. “There’s times where I was really encouraged and proud of the way we were playing, and then there was time we were shaking our heads, like you know, what are we doing?”

Philly lived up to its City of Brotherly Love civic nickname with Kase and Ducks F Ondrej Kase both playing in the game. Their parents made the trip from the Czech Republic and split their fashion ties: Kamila Kase wore a Flyers jersey and Robert Kase went with the Ducks.

Score one for mom, who repped the right jersey when David scored his first NHL goal.

“I’m the winner in my family,” David said to laughter.

But mom and pop Kase were two of the few who came out on a rainy Tuesday to watch the Flyers. Once one of the fiercest environments in the NHL, the Flyers have struggled this season to fill the arena, and there were scores of empty seats for this one.

The ones who did show up waved their signs for Lindblom and signed get well soon cards on the concourse.

Flyers coach Alain Vigneault said it was important for Lindblom to reunite with his teammates.

“He’s got a tremendous amount of support obviously from his family but from his extended family, the Flyers players, their wives and the coaches and their wives, the great fans we have here in Philly and across the States that are gonna support him,” he said. “Hockey’s a real strong and real good community and Oskar is a real good and real strong person. He is gonna be around. He’s gonna be back as soon as he possibly can.”