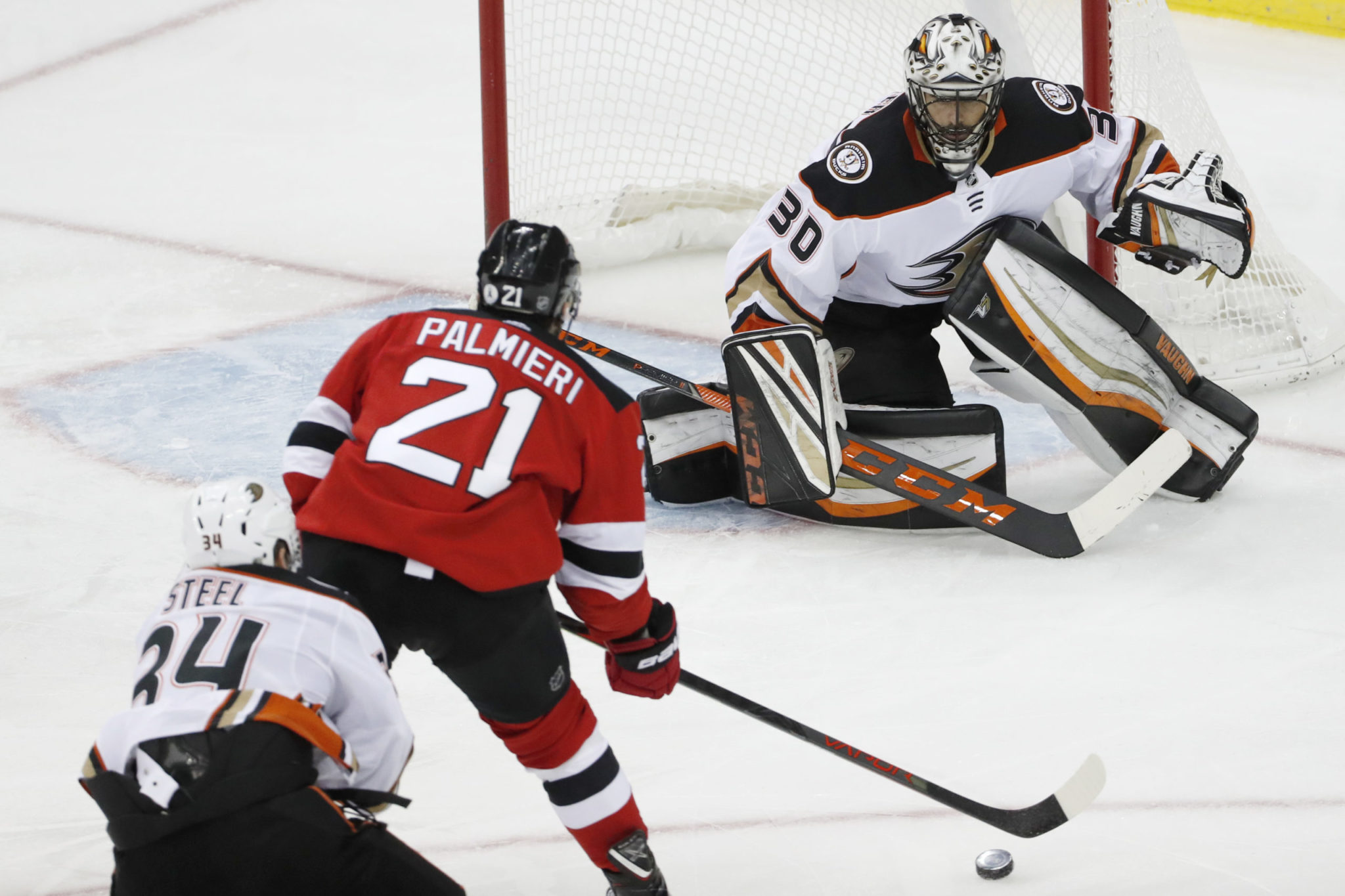 The New Jersey Devils’ decision to trade 2018 MVP Taylor Hall to Arizona has put pressure on other players to step up and lead the team.

Hischier and Palmeiri scored second-period goals and the Devils beat the Anaheim Ducks 3-1 on Wednesday night, giving them consecutive wins for only the fourth time this disappointing season.

“I think it’s for the young guys coming up, it’s those close games and finding ways to win or finding ways to close them out,” Palmieri said. “Tonight, finding a way to come from behind and find a lead going into the third and come out there and keep playing on our toes. They had a couple looks but we held the fort.”

Adam Henrique scored against his former team for the Ducks, who squandered an early 1-0 lead in losing to New Jersey for the first time in four games. Ryan Miller had 17 saves as Anaheim lost its second straight on a four-game East Coast trip.

“Obviously you get a good start and get a lead and go from there,” Henrique saud. “We have to find a way to get that next one. That’s the key right now. We are having a hard time to get two and three and put out foot on the throat of the other team. That’s an area that has to improve.”

Anaheim defenseman Michael Del Zotto had a hand in the Devils’ goals. He had a giveaway on Hischier’s goal early in the second period and was in the penalty box for interference when Palmieri gave New Jersey a 2-1 lead at 11:29 of the second.

The journeyman defenseman lost a battle with No. 1 overall draft pick Jack Hughes in the corner early in the third period, leading to Vatenen’s goal and a 3-1 lead.

Henrique gave Anaheim the lead, capping a 2-on-none with Ondrej Kase 3:33 after the opening faceoff.

The tide changed early in the second period when Del Zotto misplayed a puck sent around the boards. It deflected toward the net, where Jesper Bratt got the puck and found Hischier for a shot low in the right circle at 1:28.


Bratt is Hall’s replacement at left wing on the line center by Hischier. Palmieri is on the right side.

“I feel comfortable playing with (Bratt),” Hischier said. “I came in with him in this league and have played a lot of games already with him. He’s a great playmaker who can score, so it’s a lot of fun to play with him.”

Palmieri got his 13th of the season in the closing seconds of the penalty against Del Zotto. He made a toe-drag move on defenseman Cam Fowler and beat the screened goaltender from the right circle.

Vatanen extended the margin to two goals with a tally against his former team, and Blackwood made the lead standing up, making 11 saves in the final 20 minutes in giving New Jersey its first home win since Nov. 23 against Detroit.

“We were OK in the first,”Miller said. “We were getting the puck deep and I felt that’s how we should play the game. In the second period we didn’t do any of that and fed into what they wanted to be doing. We didn’t have a whole lot of energy until that last little push.”