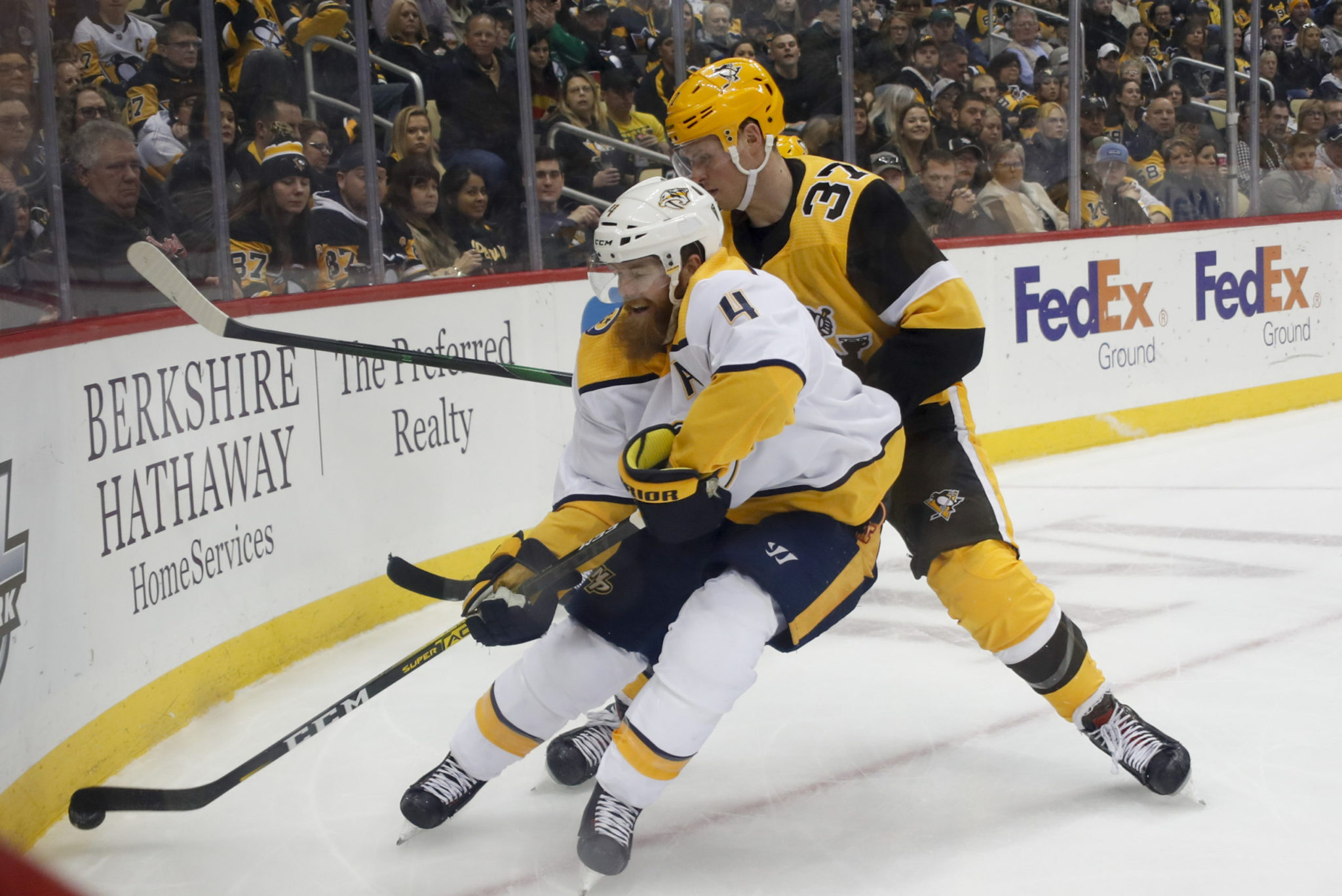 For the second straight night, the Pittsburgh Penguins scored three first-period goals against the Nashville Predators.

This time, Pittsburgh had to gut it out after the Predators rallied to tie the score.

Jake Guentzel’s power-play goal with 1:03 remaining put Pittsburgh ahead for good as the Penguins beat the Predators 6-4 on Saturday night.

“It’s such a game of momentum and when you lose it, it’s tough to get it back,” Penguins coach Mike Sullivan said. “I give our players a lot of credit. It wasn’t the prettiest win, but we found a way.”


On the winning goal, Bryan Rust’s initial point shot missed the net. Evgeni Malkin gathered the puck behind the net and gave it to Guentzel, who tucked it inside the left post for Pittsburgh’s third power-play score.

“(Malkin) gave it back to me and I tried to wrap it as fast as I could,” Guentzel said. “It just barely went in.”

Rust scored twice, including an empty-netter, and added two assists as Pittsburgh won for the ninth time in 11 games. Alex Galchenyuk and Kris Letang scored power-play goals, while Dominik Kahun also scored for Pittsburgh, which has points in 13 of its last 16 against Nashville dating back to Oct. 21, 2010.

Evgeni Malkin extended his point streak to five games with three assists and Matt Murray stopped 44 shots to win for the second time in nine starts. It was his first win since Dec. 7 at Detroit and his first home win since Nov. 9 against Chicago.

“I don’t think it’s the game plan we drew up,” Murray said. “It’s an ugly one, but we grinded it out and that’s what good teams do.”

Mikael Granlund’s 100th career goal – and second of the game – at 8:56 of the third tied the score at 4-4 as Nashville rallied from a pair of three-goal deficits.

Viktor Arvidsson got his third goal in three games, while Craig Smith also scored for the Predators, who lost their second straight after earning points in their previous five games.


“Terrible start by us,” Josi said. “They dominated the first, and I thought we played a lot better in the second and third period.”

“I thought the response in the second period was good,” Predators coach Peter Laviolette said. “We generated a lot of shots and gave ourselves an opportunity to win the game.”

Pittsburgh scored twice in the first 1:05 of the game. Rust opened the scoring 32 seconds in with his 15th of the season and sixth goal in his last seven games. Kahun scored his ninth of the season just 33 seconds later on a behind-the-net feed from Galchenyuk.

Letang scored a power-play goal, a slap shot from the right point at 9:04 of the first to give Pittsburgh a 3-0 lead.


Arvidsson got Nashville on the board with his ninth of the year, a power-play goal at 4:07 of the second period. But Galchenyuk answered with his second goal in two games, a power-play score at 8:02, as Pittsburgh regained its three-goal lead.

The Penguins’ three-goal lead didn’t last. Nashville scored twice in the final 3:57 of the second period and again in the third, but Pittsburgh’s late power-play goal was the difference.

“I liked our resilience and our resolve,” Sullivan said. “We didn’t crumble. We kept competing.”

Dan Scifo is a reporter for The Associated Press.