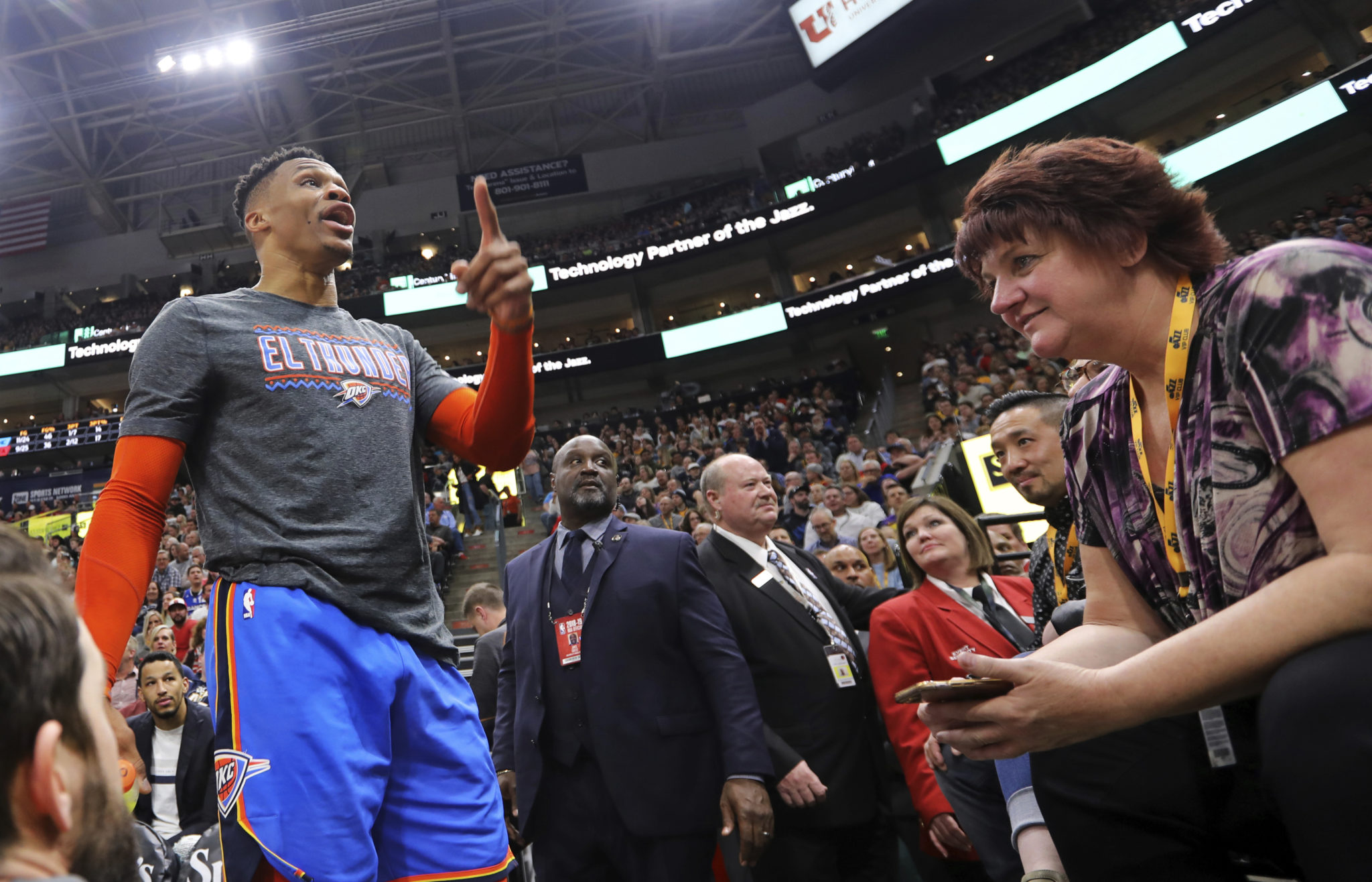 Oklahoma City Thunder's Russell Westbrook gets into a heated verbal altercation with fans in the first half of an NBA basketball game against the Utah Jazz, Monday, March 11, 2019, in Salt Lake City. (AP Photo/Rick Bowmer)

SALT LAKE CITY — Russell Westbrook got into a heated verbal altercation with a fan and the man’s wife during the second quarter of Oklahoma City’s 98-89 victory over Utah on Monday night.

Early in the quarter, Westbrook stood up from the bench when he felt both fans directed a racial taunt at him. According to the Thunder guard, they told him to “get down on my knees like I used to.” After that, Westbrook was seen on video cursing at the man and threating him and his wife.

Westbrook expressed concern following the game with the verbal abuse he and teammates have received from fans on the road. Much of it has been directed at their families, according to Westbrook. He said he is done tolerating their disrespect.

Westbrook recently objected to a young fan touching him on the sideline during a game.

Jazz security issued multiple warning cards to fans in the area and the team issued a postgame statement saying that it will be investigating the exchange between Westbrook and fans.

“Players and fans have a shared responsibility to create a safe and respectful environment,” the Jazz statement said. “If it is determined that any fans violated the NBA Code of Conduct, appropriate action will be taken.”

The fan said in a TV interview that neither he nor his wife cursed at Westbrook.

Westbrook’s teammates came to his defense following the game. Raymond Felton, who did not play, sat near him on the bench when the altercation took place. Felton confirmed he also heard the taunts that had been directed at Westbrook.

“He’s not coming off and talking to the fans, just saying stuff to them and just blurting out words,” Felton said. “He’s not. They’re coming at him first. When is there going to be a point where there’s going to be protecting those players? People can say whatever what they want to say us during games and yell out stuff and talk about our families and talk about our kids.”

Westbrook finished with 23 points, 11 rebounds, and eight assists in 37 minutes.