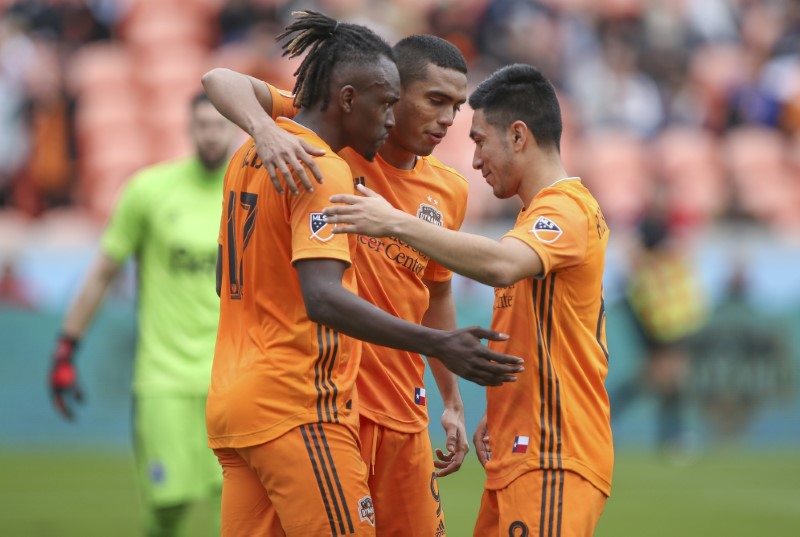 Memo Rodriguez scored twice for the first time in his pro career and the Houston Dynamo continued their bright start to the season despite giving back their lead twice in a 3-2 victory over the visiting Vancouver Whitecaps on Saturday.

Alberth Elis assisted on both of Rodriguez’s goals and then added his first of the season from the penalty spot for Houston (2-0-1, 7 points), which is off to its best three-game start in club history.

All three of those games were played at BBVA Compass Stadium, where eight of Houston’s 10 wins came last season. Rodriguez has scored in back-to-back games, both wins.

For Vancouver, Lass Bangoura scored his first MLS goal and Fredy Montero converted from the penalty spot for his first of the season.

The Whitecaps (0-3-0, 0 points) are off to their worst start in club history despite having scored four times this season. They finished Saturday down a man after Andy Rose left with an apparent head injury after his team had used its three subs.

Vancouver equalized for a second time nine minutes after halftime when Bangoura finished off an impressive, one-man counter attack. After reacting first to reach a misplayed pass at the center circle, he raced down the left flank, then cut inside to create space from defender Aljaz Struna, and then curled a shot beyond goalkeeper Joe Willis and inside the right post.

Houston went ahead for good 19 minutes later with Elis again creating the danger down the right flank. This time he combined on a give-and-go with Mauro Manotas before delivering a low cross for Rodriguez to smash with his first touch.

Rodriguez opened the scoring on a similar delivery in the 15th minute. Elis got the ball this time by dispossessing Vancouver’s Derek Cornelius in his own end and then delivering another well-weighted cross.

Montero equalized from the spot the Whitecaps in the 35th minute after Adam Lundkvist’s foul in the penalty area, and Elis scored another penalty to put Houston back in front seven minutes later. The latter came after a video review upheld the foul whistle on Cornelius.