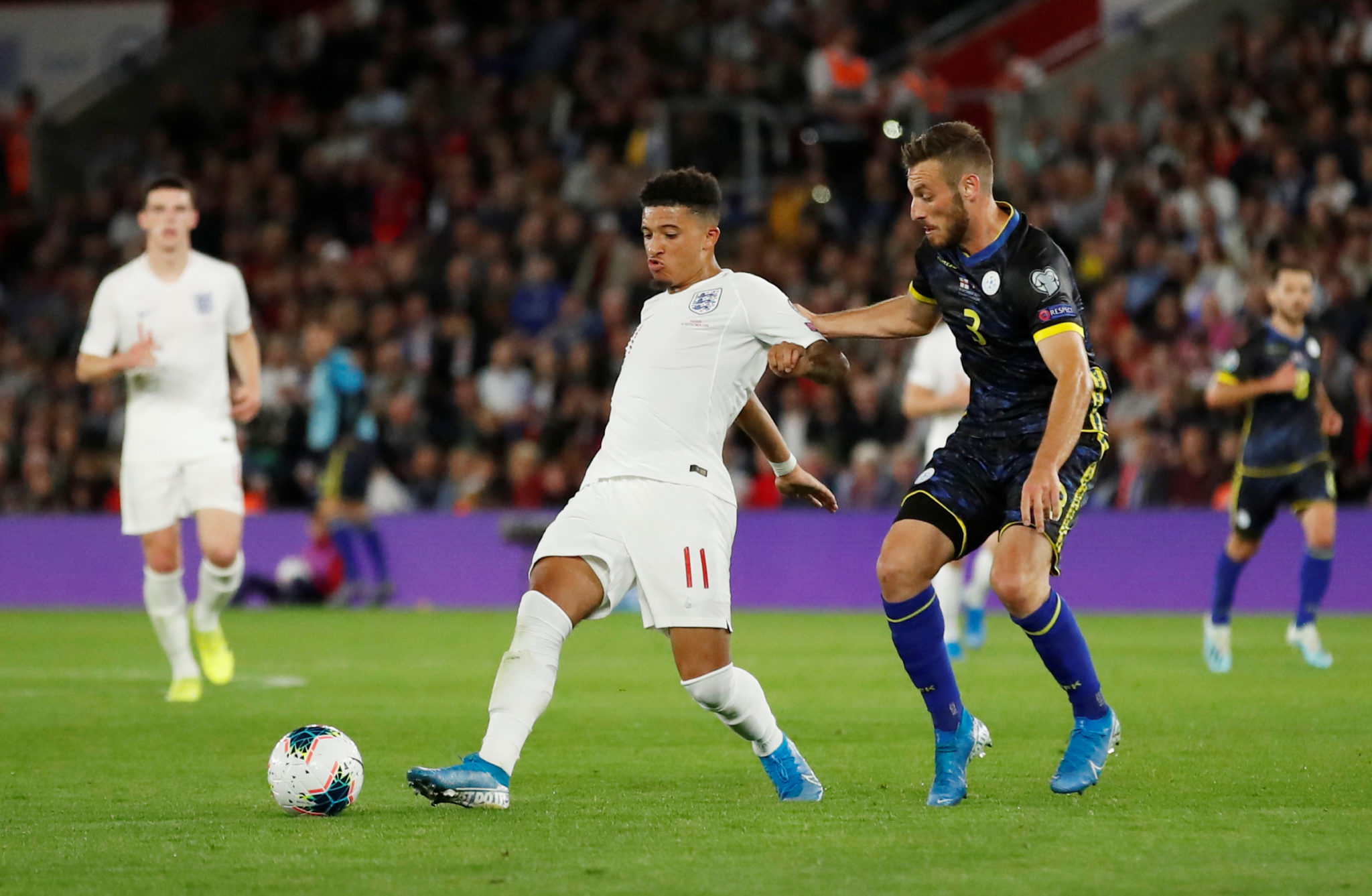 England underlined their attacking flair with another five-goal salvo on Tuesday but the way 120th-ranked Kosovo sliced through their defence will not have gone unnoticed by the big guns they are likely to face in next year’s European Championship.

England’s extraordinary 5-3 win means they have scored 19 goals in four qualifying games and victory over the Czech Republic next month will seal their place at the finals.

Harry Kane and Raheem Sterling were clinical at St Mary’s Stadium on the south coast, both scoring to take their totals to six goals each in England’s qualifying campaign.

Teenager Jadon Sancho, the third prong of England’s livewire attack, bagged a double just before halftime to open his account for the senior side, putting his country 5-1 ahead after Kosovo had taken the lead after 35 seconds of an entertaining duel.


It is the first time England have scored five goals in three different matches in a calendar year since 1960 but also the first time they have conceded three at home in a competitive fixture since losing to Croatia in 2007.

Michael Keane’s lapse for Kosovo’s dream start might have been almost forgotten had England, as looked likely, run up a cricket score after the break against a side bravely sticking to their attacking instincts, come what may.

Instead, Kosovo won the second half 2-0 and could have scored more as England looked worryingly uncomfortable against the kind of slick passing and movement they can expect from the likes of Spain, France and Belgium next year.

England completely switched off four minutes after the break, allowing Norwegian-born Lazio forward Valon Berisha to score his second goal of a night the thousands of Kosovo fans in the crowd will never forget.

Six minutes later Manchester United’s Harry Maguire, the world’s most expensive defender, made a meal out of dealing with the lively Vedat Muriqi and ended up conceding a penalty that the Fenerbahce forward converted past Jordan Pickford.

A scintillating game provided a treat for the fans with Kane also missing a penalty and Sterling hitting the post, while Kosovo, sensing England’s unease, never gave up on the prospect of staging one of the most remarkable comebacks ever seen.

It was the first time England had conceded three goals at home in any international since 2012 and Kosovo had other chances in an often frantic contest.


No wonder England manager Gareth Southgate, who was less than convinced by his side’s defending in a 4-0 win over Bulgaria on Saturday, looked a little bemused at times.

“Bizarre game really, poor errors for the goals but really pleased with the composure we showed to come back from the early mistake with some devastating attacking play,” Southgate, keen to accentuate the quality of England’s slick attack, said.

“The mistakes were obvious, the errors, we have to be better. The players don’t really need me to tell them that. We have mentioned it. The outstanding part of our play was obvious and the errors were obvious too.”

Despite the rather erratic display, few England fans will grumble too much if Southgate’s side keep producing barnstorming football like this — especially as it was not long ago that watching the national team was a form of drudgery.

The worry is, however, that such defensive frailty will be brutally exposed next year as England attempt to win their first major silverware since their 1966 home World Cup, with the semi-finals and final of the tournament being staged at Wembley.