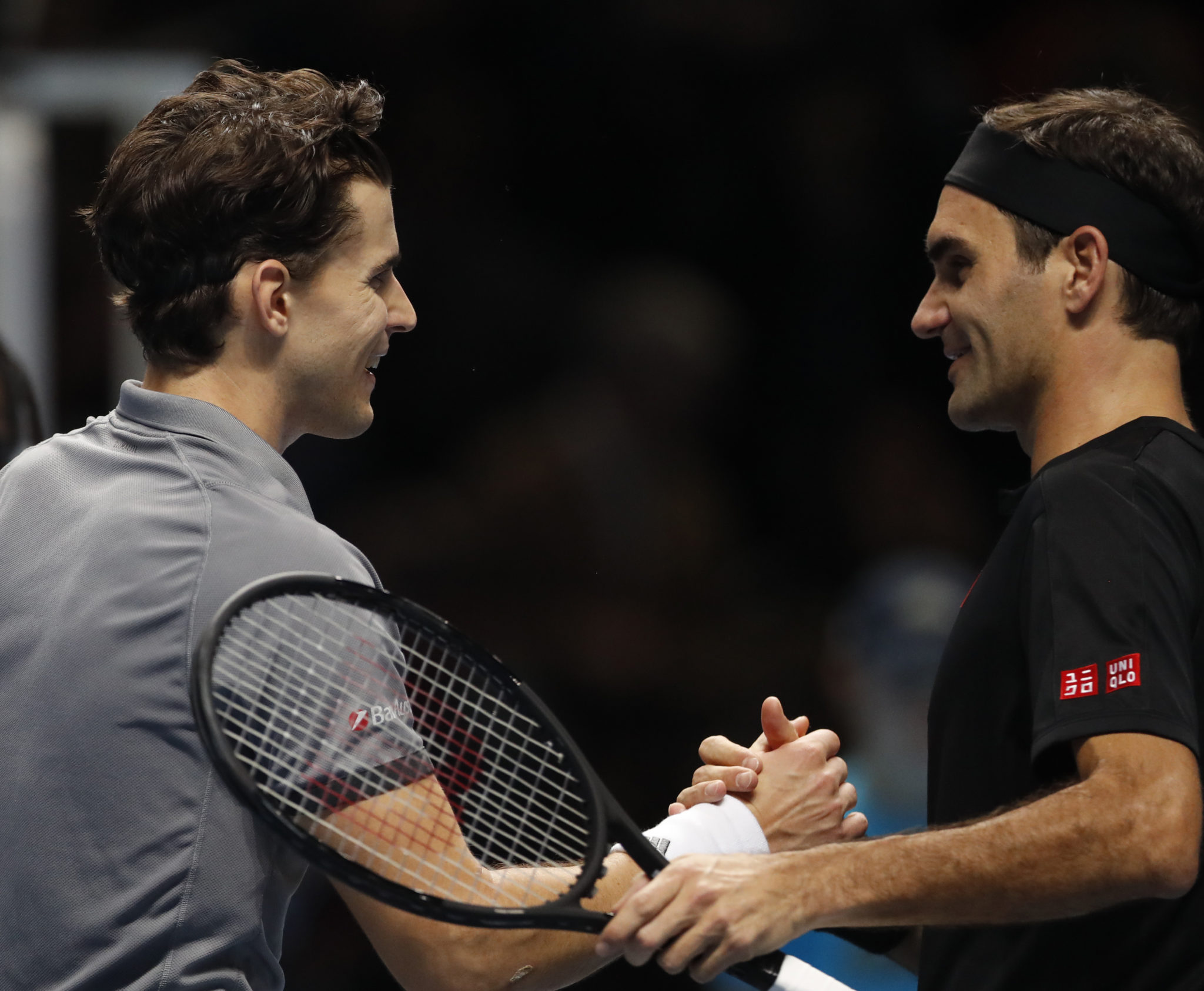 Dominic Thiem keeps getting the better of Roger Federer.

Thiem beat Federer 7-5, 7-5 Sunday in their opening match at the ATP Finals for his fifth win in seven meetings with the Swiss great — and third straight this year.

Thiem broke in the opening game of the match and again for a 6-5 lead in the first set after Federer had leveled at 2-2.

The second set went with serve until Thiem broke at love for another 6-5 lead. Federer, a record six-time champion at the ATP Finals, then missed two break points in the next game before netting a backhand return on Thiem’s second match point.

Thiem also beat Federer at the Madrid Masters and in the Indian Wells final this year, but lost to him in the group stage at last year’s ATP Finals.


Novak Djokovic had a much easier start to the tournament, easing past Matteo Berrettini 6-2, 6-1 in their first round-robin match.

But despite a near flawless performance, Djokovic still found a way to berate himself.

Leading 4-0 in the second set against the Italian, Djokovic hit a backhand wide to concede a break to the Italian, and then angrily turned toward his player’s box and shouted out his frustration.

It was a clear sign that even at the end of another grueling season, Djokovic won’t tolerate any dips in his game as he pursues a record-equaling sixth ATP Finals title.

“There’s no other reasonable explanation (to that reaction) than trying to play as perfect as possible,” Djokovic said. “But I guess that’s me, you know.”

It was certainly the same Djokovic that the O2 Arena crowd has become used to seeing. Although the second-ranked Serb — who won four straight titles at the year-end event in London between 2012 and 2015 — only needed to hit a total of 10 winners in the match as Berrettini’s 28 unforced errors handed him an easy victory to start round-robin play.

Berrettini’s forehand was responsible for 18 of those errors, including two shots into the net to hand Djokovic the only two breaks of the first set.

After giving up that lone break to make it 4-1 in the second, Djokovic broke right back and then clinched the victory with an easy forehand putaway at the net.

“He missed a relatively easy forehand for him that gave me a break (in the first set),” Djokovic said. “And after that I started reading his serve better.”

Berrettini was making his debut at the event for the world’s top eight players and had never faced Djokovic before. He also said he struggled a bit with the speed of the indoor hard court at the O2.

“The ball is not jumping a lot, so it’s tough to mix, especially my forehand,” Berrettini said. “I think it’s better when I have a little bit more time and the ball takes more spin. I think I started the match pretty good, but he was just better than me today.”

Djokovic has a chance to overtake Nadal for the year-end No. 1 ranking with a strong showing in London. He trails the Spaniard by 640 ranking points, with a maximum of 1,500 points up for grabs.